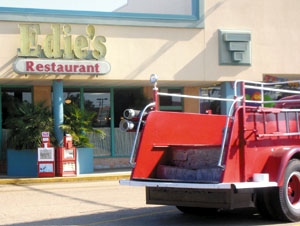 Spicy, tender pork roast with sweet potatoes. Fried chicken. Cornbread dressing. Biscuits to die for. All a thing of the past?

Stanley Leece, owner of 15-year-old Edie's Restaurant in the Acadian Village Shopping Center at the corner of Pinhook and Kaliste Saloom roads, confirms that his business has shut down, effective this week. Though he gives no specific reasons for the closure, Leece plans to expand his breakfast joint Edie's Express located at Pinhook and Bendel, where he sells Edie's famous biscuits. The eatery is open Monday through Friday, 6 a.m. to 11 a.m. Leece is taking over the spot next door that formerly housed Chargrill Now.

"I was shocked that Stanley was not going to renew his lease," says Mike Maraist, who has owned the Acadian Village shopping center since about 1990, when Leece was firing up his down home eatery.

Maraist says Leece's Edie's, with its combination of Cajun, Creole and American fare, contributed a high level of energy to his shopping center. "He was certainly a great tenant," Maraist says. "I wish we could have kept him. I'd like to replace him with someone who's going to bring that same kind of clientele." ' Leslie Turk

"We are retaining all of the employees that work with those three franchises," Dave Mann says.

Louisiana Motors has been in business for 68 years. ' Leslie Turk

Lafayette Consolidated Government President Joey Durel says creating small cities of FEMA trailers isn't the answer to the housing crisis for hurricane evacuees ' at least not in Lafayette. But some Lafayette residents are in discussion with FEMA to lease their private land for that purpose, despite the protest of Durel and other residents. "In my opinion," Durel says, "FEMA should have been focusing on the parishes as close to their homes [in New Orleans] this whole time. Why not get them as close to their personal homes as possible to deal with the rebuilding? Here in Lafayette, I would like to work with FEMA in trying to find more permanent housing for these people if they decide they want to stay." Durel says alternatives could include manufactured homes on concrete slabs and working with the Lafayette Housing Authority and the Section 8 housing program. "I have to believe that the people FEMA is trying to help don't want to live in a FEMA [trailer] city anymore than we want a FEMA city. If we could have some kind of discussion with the state, we could talk about some plans. If you come up with a plan, FEMA does a great job of helping you implement that plan. You cannot go to FEMA and say, 'Please, help us,' and then walk out of the room. We have to be a part of it." ' R. Reese Fuller

Although the company has been specializing in energy and chemicals for more than 20 years, with operations in 19 countries, the Edmee Mestayer wells represent their first American venture. State Natural Resources Secretary Scott Angelle says the event is historic for Louisiana and further places Iberia Parish in the global marketplace.

It also has a direct impact during a time of recovery from two Gulf hurricanes. "It's rewarding to know that these operations extend jobs to a number of our own workers in the oil and gas industry," Angelle says.

Direction drilling at the site off of Darnell Road recently reached a depth of 7,600 feet. The operations have relied heavily on local firms and contractors, many from Lafayette.

The SK Group generated revenues in excess of $17.3 billion last year and employs more than 5,000 workers at its offices in Houston, London, Peru, Tokyo, Sydney, Seoul and Singapore.

The state Office of Conservation initially issued SK two permits for exploration and production in September. The two wells on the site, however, were not spudded until Oct. 11. ' Jeremy Alford

After 23 years in business, the downtown location of Chris' Po-Boys is closing its doors. Owner Richard Rivet cites a changing downtown business climate and the need to concentrate on the restaurant's other three Lafayette locations. "There's been so many restaurants and bars open downtown," Rivet says, "and there's so much competition. I just could use my people in other areas. There's been great growth downtown, but it's entirely different. I'm on the outer fringe now." Rivet cites the change in parade routes and the weekly relocating of Downtown Alive! events as prime examples. Since announcing the Jefferson Street closure, Rivet says, "The response has been phenomenal. People are downright upset that we're closing. So it might be appropriate to have some sort of going away debauchery, but I haven't made a final decision." Rivet says he hopes to close the Chris' downtown location just before the Christmas season. ' R. Reese Fuller

A new documentary features performances from southwest Louisiana's zydeco musicians, culled from more than 30 years of music. The project, From La La to Zydeco, is a collaboration between UL Lafayette music professor Robert Willey and features footage recorded by KRVS 88.7 FM engineer Karl Fontenot, taken while he worked with Acadiana Open Channel. The 90-minute DVD, jam-packed with 22 musical performances and some rare bonus materials, isn't available in stores and isn't for sale ' anywhere. Only 2,000 copies of the DVD have been pressed, and you can only see it by checking out a copy from your local library. For a video clip of From La La to Zydeco and more information, visit www.willshare.com/zydeco. ' R. Reese Fuller

BRINGING UP THE REAR

If there's one thing that a growing number of college rankings all agree on, it's who belongs at the bottom.

U.S. News & World Report's popular college guide, released in late August, lists UL Lafayette as a Tier 4 cellar-dweller, along with Sun Belt conference rivals North Texas and Florida International. LSU and Louisiana Tech make it into the Tier 3 category next to Texas Tech and Arkansas. The rankings are based on common indicators such as class sizes and graduation and retention rates. (Harvard and Princeton tied for top honors.)

Washington Monthly, which has been a critic of U.S. News' rankings in the past, has countered with the debut of its own annual college guide. Instead of judging schools based on what they offer students, Washington Monthly judges its schools on what they give back to society. Its indicators include the percentage of students in a school who enroll in ROTC or the Peace Corps, research dollars spent and number of Ph.Ds awarded, and how many low-income students graduate from the university. And once again, Louisiana schools make a poor showing. UL Lafayette barely makes the list, coming in at 242 (out of 245), just below the University of New Orleans. LSU is 171 and Louisiana Tech is 180. It lists MIT and UCLA as the best schools (Harvard is 16, Princeton is 44). One notable Louisiana exception is Tulane University, which ranks 43 in U.S. News' rankings and 86 in Washington Monthly's. ' Nathan Stubbs**