New Orleans Mayor Ray Nagin's new evacuation plan calls for his city's residents to leave. But where will evacuees go? 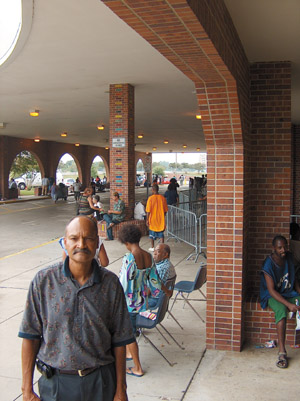 In announcing New Orleans' evacuation plans for the upcoming hurricane season, Mayor Ray Nagin proclaimed last week, "There will be no shelter of last resort." Hotel officials also announced that there would be no "vertical evacuation," and residents would not be allowed to stay in hotels in the event of a hurricane. The bottom line: the city will be responsible for getting residents to staging points like the Convention Center for processing and evacuating. Nagin said the plan would go into effect if a Category 2 hurricane takes aim at the Crescent City.

Where those residents would be transported is unclear. There is no plan in place to shelter evacuees in Lafayette Parish, but that doesn't mean that Lafayette intends to close its doors to future New Orleans evacuees.

New Orleans' plan calls for a total evacuation of the city within 36 hours of the governor and mayor announcing a mandatory evacuation. In a flowchart provided to the media, the city broadly outlined its "city assisted evacuation plan." One area of the diagram shows the New Orleans Convention Center as a processing center for evacuees and another area of the chart indicates that state and regional shelters "will be opened in anticipation of receiving evacuees."

But Mayor Nagin and New Orleans officials apparently hadn't contacted state and regional representatives before they announced their plans. Baton Rouge Mayor Kip Holden was upset with being left out of the loop and told The Advocate that Baton Rouge would not take in New Orleans evacuees. "The people in Baton Rouge need to be happy as well, and we can peacefully co-exist but not with somebody dictating to us what they want us to do," said Holden. The Advocate later amended its initial report, stating that Holden was talking about the River Center, not the other 51 designated shelters in the city.

Part of Nagin's plan calls for some elderly or infirm New Orleans residents to be evacuated by Amtrak trains. "We are talking to three different agencies ' the city, the state and the federal government ' about how we can be of assistance," says Marc Magliari, an Amtrak spokesman based in Chicago. "But if you're looking for specifics as to how many trains, going which way, carrying how many people, there's no such specificity."

Dr. Jimmy Guidry, state health officer with the Louisiana Department of Health and Hospitals, says his department has been in contact with the city of New Orleans. He notes that individual hospitals and nursing homes are required to have their own plans for evacuations, but if those plans fall through, the state can step in. "Since the hospitals are pretty much at capacity because we've lost so many in Katrina and Rita, our plan would be to activate the National Disaster Medical System to help fly patients out of state," says Guidry.

Mark Smith, spokesman for the Governor's Office of Homeland Security and Emergency Preparedness, says each city and parish is responsible for evacuating its residents, but if the need arises the state can provide assistance. "What is involved in [New Orleans'] processing plan is beyond me," he says. "I have no idea. That's something you would need to contact Ray-Ray about." Although the state would be involved with designating shelters by way of a task force, Smith says those final decisions rest with the Red Cross. "Typically," he says, "in the event of a disaster that requires sheltering, the Red Cross does the sheltering, so we work very closely with the Red Cross, but we don't interfere with their procedures." He says his department has been in contact with city and parish officials throughout the state about New Orleans' plans.

Bill Vincent, director of the Lafayette Parish Homeland Security and Emergency Preparedness, was unavailable for comment before press time. But Mike Mouton, Lafayette Consolidated Government's emergency operations and security coordinator, says Vincent is the man the state would contact in the event of a hurricane. Part of his job is planning evacuations out of Lafayette. Mouton's job is to activate that plan, but he has yet to hear from the state or New Orleans on where residents would be sheltered.

Cajundome Director Greg Davis only learned of New Orleans' plans through media reports the day after Nagin held the press conference. In one newspaper account, Davis read that the state would be responsible for determining where evacuees went from New Orleans. "When I read that I was wondering how facilities such as the Cajundome would be impacted," he says. "I'm expecting to get that word, and if I don't receive a phone call shortly, I certainly will be pursuing that information. I'm not going to go into the hurricane season not knowing that." As of press time, Davis had no further details about New Orleans' or the state's intentions.

Following hurricanes Katrina and Rita, the Cajundome sheltered 18,500 hurricane evacuees. At its maximum capacity, 7,000 residents lived in both the Cajundome and the adjoining convention center. The Cajundome operated as a shelter for two months, and it took another two months to repair and renovate the facilities, at a cost of $6 million. Davis says FEMA has agreed to pay most of the cost ' except $1.2 million, which the Cajundome is appealing.

Due to the scale of Katrina and the amount of displaced New Orleanians, Davis notes it was the first time that stadiums and arenas became shelters for extended periods of time in a role normally reserved for churches and community centers. The new shelters gave way to a new term ' mega-shelters.

Within 24 hours of the Red Cross taking over the Cajundome as a shelter in the wake of Katrina, Davis contacted City-Parish President Joey Durel and informed him that if evacuees were going to be properly cared for, he needed to take control of the facility. "The Red Cross did not have the ability to handle that," Davis says. "They were in over their heads [last year], so we took it back and managed the facility ourselves in partnership with the Red Cross."

As a member of the International Association of Assembly Managers, Davis was subsequently asked by the organization to chair a national task force to draft best practice guidelines for mega-shelters. IAAM's executive board is considering a 100-page draft titled "Mega-Shelter Best Practices for Planning and Activation" this week. If accepted, the organization will seek the endorsement of the Department of Homeland Security and the Red Cross. Another document is in the works for the operation of mega-shelters.

"I have the confidence that our state, parish and city emergency preparedness officials are aggressively working on that," says Davis. "And if I don't get the phone call, then I have the responsibility, as the director of the Cajundome, to get off of my butt and to seek them out, ask the right questions, get the right answers and then prepare this building to be a shelter, if that's what I'm required to do. I'm not going to shy away from the responsibility from doing that simply because no one picks up the phone and calls me. I'm totally confident that I'm going to get the answer, either through their initiative or my own."