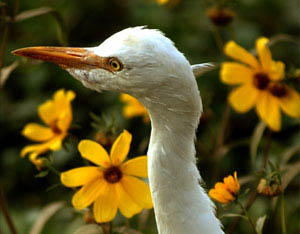 Richard Martin, assistant director for The Nature Conservancy in Louisiana, thought 2006 would be a banner year for the wading bird rookery at Lake Martin. A management plan the conservancy helped initiate five years ago was showing signs of significantly revitalizing habitats for all the lake's wildlife.

Oxygen levels in the lake were up, helping to bolster fisheries. The buttonbush and cypress trees where the birds typically build their nests also appeared healthier than they had in years.

In March, at the very start of the nesting season, Martin noted almost 200 more roseate spoonbills at the lake compared to the same time in 2005. An early population of great egrets and blue herons also looked encouraging. Sightseers, including many photographers, were already frequenting Lake Martin, settling in along Rookery Road to watch the birds begin to build their nests and lay eggs.

"The birds were all there, people were out taking pictures, everything was looking great," Martin says. "I was expecting this to be a record year, and then all of a sudden the birds disappeared overnight."

On the night of March 17, an estimated 2,000 birds, some of which had already begun nesting and laying eggs, fled Lake Martin. Usually a spectacle of wading birds such as egrets, herons and roseate spoonbills this time of year, the rookery is now eerily calm. Residents and regular visitors to Lake Martin have seen the number of birds continue to drop, and some have seen crows eating abandoned eggs.

"People are very shocked," says Charlie Bush, a professional photographer in Houma who frequents Lake Martin. "I guess my feeling is if it had been a gradual thing and we started noticing a few disappearing here and there, it'd be much more explainable than waking up one morning and they're gone."

Bush says he has witnessed "a huge decrease in the number of birds. You wouldn't even know there's a rookery there ' they're just all gone."

Speculation has run rampant as to what caused the birds' sudden exodus. On an online forum called Labird at virtualbirder.com, the conjecture ranges from low water levels in the lake caused by the recent drought to a possible influx of bird predators such as raccoons or possums to an increase in human disturbance.

Tommy Michot, avian ecologist with the National Wetlands Research Center, says the numbers of nesting birds at Lake Martin have been on a decline over the past decade. The rookery peaked around 1993, with some 40,000 nesting birds. Numbers have since tapered off gradually, down to about 9,000 birds nesting last year. Michot says this type of fluctuation is natural, but the sudden drastic drop in numbers this year indicates some type of unnatural disturbance.

"It's not unusual for a colony to change location," he says. "But for a whole bunch of birds to just abandon nests is pretty rare. There must have been some reason."

A March 27 flyover conducted by the Wetlands Center estimated less than 1,000 birds were nesting at the lake.

Michot doubts natural predators would have caused the birds to flee, since bird colonies are typically attuned to predator danger at a site before they begin nesting. "Human disturbance is the only thing I can think of," he says. Martin says two photographs are the only evidence that has surfaced from a recent Wildlife and Fisheries investigation. One captured a boater trespassing in the rookery, and the other shows a raccoon up in one of the rookery's cypress trees.

Phil Bowman, assistant secretary of the state Department of Wildlife and Fisheries, says after receiving several complaints, the department has stepped up enforcement of a law that prohibits boat traffic in the rookery from February through August during nesting season. "From what I've been told, we have gotten the disturbance issue under control," he says.

Martin says The Nature Conservancy is encouraged that the recent incident may provoke tighter enforcement of the rules at Lake Martin. Wildlife and Fisheries first began prohibiting boat traffic in the Lake Martin rookery in 2001. Martin is aware of several boats that entered the rookery, but is unaware of anyone ever being ticketed for it by Wildlife and Fisheries. The Nature Conservancy recently discovered that boat trails had been cut into the rookery.

"There's a lot of people concerned that we need to do more enforcement," Martin says.

Keith Ouchley, director for The Nature Conservancy in Louisiana, which owns the 10,000-acre Lake Martin and Cypress Island Preserve, says some smaller rookeries along the coast have also failed this year. "It could be a general food failure along the coast due to the hurricanes," he says. "That's been one of the hypotheses that's been put out there."

Martin says that it is hard to gauge what the total loss would be if the rookery doesn't recover.

The Nature Conservancy has estimated more than 50,000 people visit Lake Martin throughout the bird-nesting season, with an average of 3,000 cars driving up the gravel road alongside the lake each weekend. The lake's four boat tour operators take out an average of 150-200 customers a day through the nesting season.

Renowned for its easy roadside access to one of the largest bird nesting sites in the country, the cypress swamp and lake off Hwy. 31 between Breaux Bridge and St. Martinville attracts birders and nature photographers from around the world.

"What's to say whatever happened this year won't keep happening?" he asks. His workshops would have brought 25 people into stay in Lafayette for four nights.

Word of the rookery's sudden collapse has spread fast. Jacques Privat, who lives about a mile from the lake, says hardly a day goes by when someone doesn't ask him what happened at the rookery. "I'm amazed at how many people I run into who ask me about the disappearance of these birds," he says. "People in St. Martinville, who live miles and miles away, people from Lafayette. A lot of people noticed what happened."

At The Nature Conservancy, Martin says, "Lake Martin is so important to so many people. Virtually the day these birds left we were getting calls from people asking what happened."

Last week, at a book-release party at Ruth's Chris Steakhouse for The Nature of Things at Lake Martin, a result of five years of work from photographer and nature writer Nancy Camel, the festivities were dampened by the concern over the rookery's health.

At one point, Martin wryly noted, "I hope this book launch is not a requiem for the rookery." Ouchley addressed the crowd prior to the book signing about concern over the absence of birds at the rookery, reaffirming The Nature Conservancy's commitment to preserving Lake Martin. Plans are already under way to open a new information center out at Lake Martin next year, which many hope will also help to direct traffic and monitor activity at the lake.

Martin still estimates some 800 birds are nesting at Lake Martin. "That certainly qualifies it as a rookery," he says. "But it's not the spectacular scene that it was in years past. We're hoping it's just a fluctuation, and by making a few changes and more enforcement and maybe more water, that next year maybe it'll rebound."