A wide array of issues could arise in the agriculture commissioner's race, but the contest will be a referendum on Bob Odom's competence and trustworthiness. 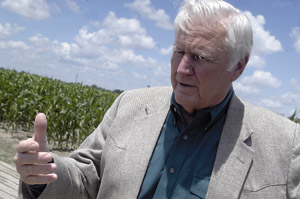 Bob Odom cut his political teeth with the Louisiana Department of Agriculture back in 1960, when cowboy crooner Jimmie Davis was governor and future governor Kathleen Blanco had just completed high school. Fresh from the Haynesville cow farm where he was reared, Odom initially toiled away as head of the pesticide division. He crawled his way to the top in 1979 and has served as commissioner ever since, with no real opposition.

Odom, now 72, has spent nearly three decades advancing his department's reach, which now includes a $100 million annual budget and 800 employees. All the while, he built a powerful, statewide Democratic Party network. He also has stayed in touch with his roots in the pesticide industry; his campaign finance report reads like the pest control section of the Yellow Pages. The donor list shows thousands of dollars in contributions from companies with names like "Bug Smashers" and "Roach Busters."

But Odom's Teflon persona has been tarnished during his most recent term. While a state district judge earlier this year tossed out a litany of corruption charges against him, Odom still faces a relentless prosecutor in Baton Rouge District Attorney Doug Moreau, who argues the charges were wrongfully dismissed. Moreau wants to bring Odom to trial on charges that range from money laundering to filing false public records. Additionally, in recent weeks, another judge ruled that Odom was ill-advised in seizing certain seafood imports and holding his own administrative hearing to determine the constitutionality of his actions.

In spite of it all, much like New Orleans Congressman William Jefferson, Odom has decided to run for another term. He shows nary a hint of worry. "I will not turn my back on the farmers, forest landowners and good people of this state," he says.

The mere suggestion of corruption, however, has packed the starting gate in Odom's race. He is bracing for what will no doubt be the race of his life. So far, and to no one's surprise, all his challengers are Republicans. Democrats, meanwhile, know full well how effective his Election Day network can be, at least pre-Katrina. Odom is unique among Louisiana politicians in that his base combines the rural white "Bubba" vote with the party's traditional base among urban blacks. No one else since Earl Long has been able to do that. Odom even prints his own sample ballots and circulates them statewide. At last official tally, Odom had raised more than $300,000 for his re-election and had a respectable $590,000 in the bank.

But this isn't going to be a conventional race.

State Rep. Mike Strain of Abita Springs has had his campaign up and running since the corruption charges against Odom started sticking in headlines. Strain has raised a whopping $788,000 from donors impressed with his "Army of Reform" approach, which is aimed directly at Odom. Lurking in the wings is Baton Rouge Metro Councilman Wayne Carter, another Republican, who has $682,000 in his campaign war chest and an armful of policy ideas.

With such well-heeled contenders, the GOP's dilemma may be deciding who has stronger conservative credentials. James Quinn, executive director of the Louisiana Republican Party, says the GOP won't play favorites, at least not this early in the race. "As of right now, I would be surprised to see any move for an official endorsement," he says. "We'll see who makes the runoff and go full throttle from there."

Strain already appears to have won the hearts and minds of the party faithful, if endorsements are any indication. He has the backing of U.S. Rep. Charles Boustany of Lafayette and U.S. Sen. David Vitter of Metairie, among others. Whereas Odom articulates no specific campaign strategy at this stage, Strain touts a five-tier proposal for reform. He wants to reduce farmers' transportation and fuel costs through tax credits, invest more money in new farming methods and "be a fiscal hawk when it comes to the use of tax dollars."

A veterinarian by trade, Strain also wants to develop a veterinarian task force to increase awareness of biological events (think mad cow) and take a scientific approach to livestock sanitation.

Don't expect to hear about all of these ideas in Strain's paid-media campaign, though. His overriding theme will be demonizing Odom and the commissioner's pending legal woes, a tried and true political method that has toppled many incumbents over the years. And there's no shortage of fodder against Odom.

Carter, meanwhile, may surface as a source of fresh ideas this campaign cycle. While he owns a company that sells offshore drilling equipment, Carter also has roots in north Louisiana and the timber industry. He and Strain both support the same ethics overhauls, but Carter also wants an inspector general at the administrative level to oversee the burgeoning department, which regulates florists, loggers, hog farmers, gas stations ' just to name a few.

Carter also is fond of specialty crops and believes organic farming could help Louisiana compete nationally. One of his ideas would pair Louisiana farmers with local school districts, creating a new market for agriculture professionals and providing healthy alternatives to students at a price schools will love.

Obviously, Carter will take his own swipes at Odom as well.

As for the incumbent, he already has endorsements from the state's sheriffs and assessor associations, and Democratic standbys such as the AFL-CIO and the teachers unions likely will follow suit. The Louisiana Democratic Party also is standing firm behind Odom. "Unlike the others, I am not running for re-election to essentially shut down the Department of Agriculture and Forestry or to eliminate crucial programs Louisiana citizens rely on," says Odom. "I am running for re-election because I know Louisiana agriculture and forestry."