The new appraisal of attorney Jimmy Davidson's Girard Park Drive property is in, but UL Lafayette won't release it. 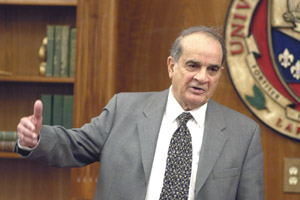 The university first said it needed written consent from the new appraiser before releasing the document. For its part, the DOA claimed appraisals are not public record because the information is used to negotiate a price. "We do not necessarily want the owner to know the appraised value during negotiations," wrote Jerry Jones, the DOA's director of Facility Planning and Control, in an e-mail response.

The Independent Weekly didn't buy those arguments. Gary McGoffin, an attorney for the newspaper, sent a letter to both groups last Friday morning. Meanwhile, university spokeswoman Julie Dronet said UL President Ray Authement was preparing a release on the findings of the appraisal and the university's "next steps."

McGoffin points out that the state constitution and Title 44 of the Louisiana Revised Statutes provide that all records in the possession of the public body are available to the public, unless specifically listed as an exception. "The burden is on the public body to prove that the record may not be disclosed," McGoffin says. "And we find no exception in the rules that would prohibit the disclosure of any appraisal in the possession of [UL]."

At press time, the university and the DOA gave The Independent Weekly a different excuse for not releasing the appraisal. Citing a provision of Louisiana law, they both claimed the appraisal was off-limits because it was "obtained or prepared in anticipation of litigation or in preparation for trial."

So despite freely offering previous appraisals, the university won't release this one because it expects to be sued over the whole land swap debacle.

The new appraisal is the third valuation of Davidson's property conducted for the purpose of this land swap. The initial December 2003 appraisal and the October 2005 revision yielded the same $3.25 million valuation, but the most recent appraisal is probably significantly lower than Parker's, say local real estate professionals, many of whom were quick to cry foul when the land swap proposal was first announced.

"The $3.25 million was ridiculously high," says Harold Lambert, a commercial real estate appraiser, developer and broker. "I think it should be between $1 million and $1.5 million, depending upon the residential density a buyer could accomplish there." For example, if the buyer could rezone the 4.1 acres, now classified for single-family housing, for condominium or other multi-family development, it may be worth the upper end of that [$1.5 million] range, he says. The university is not restricted by zoning ordinances and can do whatever it wants with the Girard Park Drive property; Authement says he needs the two Davidson homes for faculty housing.

Ordered in December by the Board of Supervisors for the UL System, which had approved the controversial land swap deal several months before, the new appraisal was done by Lane Godshall of Appraiser Analysts in Lafayette, according to real estate sources. Godshall, however, would not even say whether he conducted the appraisal. "It's confidential," he says.

Last December, The Independent Weekly published an editorial calling for Authement to kill the proposed deal, in which 36 acres of the horse farm would be exchanged for Davidson's 4 acres, and later that day the Board of Supervisors asked the DOA to recommend independent appraisers for both the horse farm property and the Davidson land. The board asked for the new appraisals because an amended appraisal of the horse farm property had revealed its value to be $5.37 million if the university got it rezoned from residential to commercial, substantially more than the $3.25 million the university planned to exchange it for.

On its own dime, the university sought to rezone the property so the anticipated new owners, Jerry Brents and Dan Menard, could develop a retail center. The university, however, was willing to sell it at the much lower residential value, at a loss of more than $2 million to the state. The rezoning attempt was unsuccessful.

With the Davidson property likely valued much lower by Godshall, Authement's blunder could now be approaching the multi-million dollar range.