A local street vendor is being fined for conducting his business on Jefferson Street. 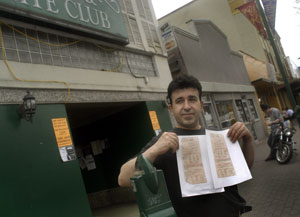 A loophole recently shored up in a longstanding local ordinance has thrown Faramarz Yaghobi for a loop, but the street vendor has vowed to dig into both Jefferson Street and his pockets to keep his late-night business running.

In the last six years, the Iranian immigrant has become such a fixture in downtown's nightlife that he's known by only one name. "Everyone calls me Frankie, and I like that," he says. His business, Frankie Burger, is a kitchen on wheels ' a trailer equipped with propane gas to heat a grill, tanks for hot and cold water and a prep counter where he sells and prepares hamburgers, cheeseburgers, sausage dogs, hot dogs, boudin and Frito pies. He opens on Thursday through Saturday nights around 7 p.m. and sometimes works until four the next morning serving the late night crowd downtown. "I'm the last person to leave downtown, always," he says.

Yaghobi began selling sandwiches from a truck to the bar crowd on the McKinley Street strip in 1999. With the blessing of Andy Monceaux ' then the owner of Amanda Scott's (now NiteTown) on Jefferson Street ' Yaghobi beginning setting up his business on weekend nights in front of the nightclub. He later purchased a trailer and served food in front of the Voodoo Cantina (now Legends). Since January, he's stationed Frankie Burger in front of the Renaissance Nightclub on weekend nights.

Owner Judd Kennedy has no problem with Yaghobi conducting business in front of his club; in fact, he even allows Yaghobi to tap into his electricity at no charge. In exchange, Kennedy says, "He gives me supper every night when I get to work. Me and my wife eat free." And Frankie Burger patrons are granted free admission into Renaissance. It's a sweet deal for Kennedy. "People stop in front of him to get food," he says. "When they hear the music coming out of the building, they're more likely to walk into the building. It's good for my business. It's attracting a much older crowd through the door. The younger crowd, they reserve their money for alcohol. The older crowd has money to spend on food and alcohol."

But the wheels might be coming off Yaghobi's business. On the nights of Friday, March 4, and Saturday, March 5, he was fined $100 each night for violating a newly revised city-parish ordinance. And again this past weekend, he was open for business Thursday, Friday and Saturday night, but he says that he only received one ticket on Thursday night. Before the revision, the ordinance prohibited anyone from parking a vehicle in a public parking space for the purpose of showing and selling a vehicle, washing or repairing a vehicle or for "any commercial advertising purposes." The newly revised ordinance now also prohibits "operating a business."

In the battle over Frankie Burger, other businesses are also feeling the pinch. On the night of March 5, radio station KSMB was cited for violating the revised ordinance. Mary Galyean, general manager for Citadel Broadcasting, says, "It's something we do every week. I'm trying to understand why something we do as our everyday business is now against a city ordinance."

Galyean says that after conducting a live remote broadcast in front of NiteTown for the nightclub, her crew was wrapping up when they were cited by Lafayette police around 10:30 p.m. Cpl. Mark Francis with the Lafayette Police Department confirms that both Yaghobi and KSMB were cited for violating the revised ordinance. About KSMB, he says, "We're waiting to determine whether or not they still fit into this new ordinance. The officer felt that the radio station van was in violation ' in his interpretation ' of the ordinance. We've asked the officers to cease issuing citations to the radio stations until we get some clarification as to whether they're included or excluded."

"I'm not sure what's going on here," Galyean says. "Are they planning to cite us at our other remotes or cite other TV stations or radio stations?" This past weekend, Galyean says KSMB hosted live remotes at both Club 410 on Friday night and at NiteTown on Saturday night, both without incident.

It appears as if fining radio stations wasn't the intent of the new ordinance. In a letter from Director of Traffic and Transportation Tony Tramel to consolidated government Chief Administrative Officer Dee Stanley, Tramel writes that downtown businesses are at "a tremendous unfair advantage to vendors who: Show up on Thursday with a mobile trailer and park it on Jefferson Street for two or more days, chained to a parking meter post, and often fails [sic] to provide proper fees for parking."

Yaghobi's recent nighttime fines come on the heels of a pattern of daytime fines issued by the city. On the days he sets up for his evening business, Yaghobi says he puts quarters in the appropriate meters, but he still receives parking tickets.

Rob Robison, owner of Jefferson Street Market and president of Downtown Lafayette Unlimited, says the issue isn't about Frankie Burger, but the proliferation of street vendors without proper regulation. "It's nothing personal against Frankie," he says, "but if he can be there, everyone can be there; then you've got a big problem."

But not every business downtown has a problem with Frankie Burger.

"Frankie's an awesome neighbor," says World of Body Works owner Yancy Miller. "We've never had any trouble with him before, so I don't understand the big ruckus. The guy is just trying to make an honest living. He could be out on the street selling crack, but he's not. He's not harming anybody, and he's paying the meter everyday."

When Miller and his wife, Miriam, heard that Yaghobi had been fined, they reached into their own pockets and gave him $100. "Nobody can afford a $100 fine every day," Miller says. "The guy's trying to work for himself to have the American dream. And I just thought it would be helpful if we helped him."

"That was an awesome day for me," Yaghobi says. "It was very friendly. But I cannot say to people, 'Hey, give me money.' I want to work, honestly."

Yaghobi says that he has looked into getting an attorney, but he can't afford it. What he can do is raise his prices. He's increasing the price of hamburgers, cheeseburgers and sausage dogs by 50 cents; and on his Frito pies, boudin and hot dogs, he's going up by a quarter. He says the cost increases won't cover all of his nightly fines, but it will cover about $50 worth each night. "I raised my prices, but it's still cheap for downtown," he says. "I'm sorry that I raised them, but I have no choice."

Yaghobi has also started a petition drive. Thirteen local businesses have agreed to display his petition, and he's collected about 600 signatures so far, some of them from customers from Renaissance, Marley's, Daiquiris Supreme Downtown, Legends, NiteTown, The Bad Kitty, NiteCaps, and World of Body Works.

For Yaghobi, the fines are just the cost of doing business downtown. And as long as Kennedy will have him, Yaghobi has no intention of moving from his spot in front of Renaissance on Jefferson Street. "Why?" he asks. "I have to live. This is my job."