The state Department of Transportation and Development is asking Lafayette Parish to prioritize one of two multimillion dollar projects ' the Ambassador Caffery Parkway south extension or the Verot School Road widening. 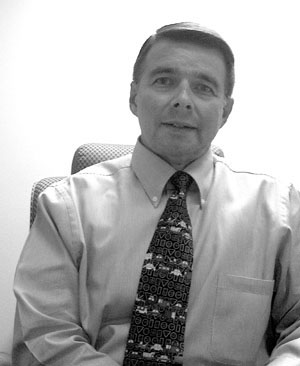 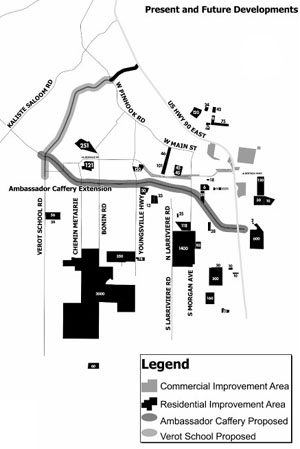 Lafayette Consolidated Government Planning Manager Mike Hollier is no stranger to gridlock. Prior to moving from Abbeville to Lafayette seven years ago, he drove the entire stretch of Johnston Street every morning to get to his downtown office. It took him 30 minutes to drive approximately 20 miles from Abbeville to The Mall of Acadiana ' and another 30 minutes to travel five miles from Johnston Street to downtown. Yet for Hollier and the Lafayette Traffic and Transportation Department, the delays of an 8 a.m. commute pale in comparison to the government standstills associated with building new roads.

"It's mind numbing, the bureaucracy of it all," says Hollier.

He and his colleagues have been waiting almost a decade for all the studies and approvals to come through for the South College Road bridge and extension, a project requiring detailed coordination between federal, state and local government. Though a federal grant, with matching state funds, was secured for the South College Road extension eight years ago, it is still nearly two years away from being bid for construction.

"The money is sitting there," Hollier says incredulously. "Nobody's talking about that. Yet it has a more powerful impact on the network than anything else."

Because the intricacies of transportation projects could also double as sleeping aids, Hollier is taken aback by the passion that citizens and government representatives are now showing in the debate over which state-funded highway project Lafayette Parish should put at the top of its wish list ' extending Ambassador Caffery Parkway south to Highway 90 or widening Verot School Road from Highway 90 to Vincent Road. The state Department of Traffic and Transportation is readying both projects and plans to bid one by the end of next year, with the other scheduled to follow within 18 months.

"An 18-month difference between two projects is a nanosecond in construction time," says Hollier. "It took us 50 years to build the Camellia bridge."

Given the history, advocates on both sides of the Ambassador-Verot debate are insisting that their preferred project cannot afford to be placed on the backburner. "This is a terrible situation to be put in," says Hollier, who recognizes the benefits of each initiative. "I think there just needs to be a mindset that both of these projects are going to get built; it's just a matter of two years to 18 months difference ' assuming that everything goes smoothly."

The debate will come to a head when the Lafayette City-Parish Council, acting as the Metropolitan Planning Organization, votes to decide which road to prioritize. The MPO meeting will likely take place sometime next month, though the date isn't finalized. In December, when the four federally-mandated MPO advisory committees met to discuss the issue, the two citizens' traffic committees voted to recommend prioritizing Ambassador while the two committees consisting largely of city-parish transportation and planning engineers voted for Verot.

"These are high-profile [projects]," says Bill Fontenot, Acadiana district administrator for DOTD. The Ambassador south extension is estimated to cost $40 million over three years while the Verot widening is projected to cost $20 million and be completed in about one year. Because DOTD's budget won't support bidding out both at the same time, the state is asking the MPO for direction.

Given the shrinking budget at DOTD for highway improvement projects and its tendency to reshuffle those projects, many government officials say there will likely be at least a five-year lapse between the bidding of Ambassador and Verot. LCG Associate Public Works Director Pat Logan estimates that highway construction costs are up almost 50 percent in the last five years, while labor and material costs double every 10 years. In addition, DOTD hasn't seen an increase in its budget since the 1980s, and has to put more of its resources into road maintenance.

Fontenot admits the state's 18-month scheduling difference between the two projects isn't set in stone. "It's a forecast, not a guarantee," he says.

Proponents of prioritizing the Ambassador extension say that any hesitation in building the $40 million road will increase the likelihood that such a massive project will be bumped back indefinitely ' something that's previously happened to the Ambassador south extension.

Lafayette Parish Tax Assessor Conrad Comeaux remembers being on the parish council in 1989 when it was awarded approximately $1.8 million in DOTD funds for planning the Ambassador south extension. At the time, concerned north Lafayette residents questioned whether the parish was ignoring planning for Ambassador north that would eventually extend the parkway to I-49 near Gloria Switch Road. (Once both north and south extensions are complete, Ambassador Caffery will form an inner-city beltway tied to I-49 on both the north and south ends of the parish.) Comeaux says because of the divisive debate, the parish attempted to split the money between planning for the Ambassador south and north extensions ' and lost the money altogether.

"Here we go again," Comeaux says. "We don't have many arterial roads in Lafayette that other places in Louisiana have. Why? Because we don't send a clear message to Baton Rouge about what projects we want done. So, [road projects] get sent to Shreveport and other places. Consequently, we're still struggling with transportation in Lafayette."

Perhaps the biggest proponent of Ambassador south is Broussard Mayor Charles Langlinais. During the 1990s, Langlinais watched Broussard sprout from a town of about 3,400 to a population of 6,418 according to the last Census count in 2000 ' the highest growth rate for a city in the state. Broussard also leads the region in business establishment growth. Langlinais attributes much of his city's economic development to Albertson's Parkway, a state-funded road that opened in the beginning of 1999 and has quickly filled up with businesses. Since the opening of Albertsons Parkway, Broussard's sales tax revenue has more than doubled.

"The realization is roads are economic development," says Langlinais. "Albertsons Parkway is a case study. It's been phenomenal as far as sales taxes directly attributable."

As for future sales taxes, which could eventually be directly tied to development along the Ambassador south extension, Langlinais commissioned a study from Gulf Engineers and Consultants in Baton Rouge that showed business sales along the development could annually reach up to $600 million. For their projections, GEC took dollar estimates of sales per square foot for shopping centers in Louisiana from the National Research Bureau's 2003 Shopping Center Census. Sales of $600 million would translate to additional sales tax revenue of $1.2 million for the City of Broussard, and $600,000 for Lafayette Parish.

In addition, a Lafayette Parish Tax Assessor's report estimates the development would bring an additional $5 million in commercial property taxes annually to LCG. "The parish, if they delay it, each year they are losing $5 million in collectible tax receipts," says Langlinais. "What is that worth? To me, it's not even close to other projects."

GEC Engineer Dean Tekell, who worked as a traffic engineer in LCG from 1984 to 1998, says it doesn't make sense to him why the parish would opt to place a $40 million gift on hold.

"It seems kind of backwards to say, 'Well, we'll take the $16 million and fight for the $40 million,'" he says. "If there's uncertainty about highway funding, then my position is, let's take as much money up front as we can with the Ambassador Caffery extension. It's like a guy walking up the street and saying, I'll give you $40 now or I'll give you $16 now. Well, I'll take the $40, thank you very much."

Comeaux rests his case for Ambassador on the added relief it will provide for hurricane evacuation. "We're asking the feds to fund completion of I-49 to help with evacuation for natural disasters," he says. "The extension of Ambassador would go a long way with helping with evacuation purposes contrary to the widening of Verot." For Comeaux, prioritizing Verot would be another example of local government getting its messages crossed. "I might not see I-49 in my lifetime, but I will probably see Ambassador Caffery south extension and that will alleviate natural disaster evacuation. To me, it's a non-issue."

Both Comeaux and Langlinais fear that if Ambassador gets pushed back now, rising construction costs and bureaucratic delays could put the project in jeopardy. Langlinais also saw the project previously lose funding, when the state diverted federal dollars originally dedicated to Ambassador in the 1990s to help fund the new Mississippi River bridge in St. Francisville. "They've loaded the hangar up so much with projects that there's not going to be enough money to do any of them," Langlinais says of DOTD's stretched budget.

"What [DOTD] is doing is they're plugging the dam with a cork," he says. "Hell, we're all standing in traffic, and it's getting worse."

From a traffic standpoint, it's hard to argue against the need to immediately widen Verot School Road. According to the Lafayette Department of Traffic and Transportation, Verot was built to handle 10,000 to 12,000 vehicles daily ' and currently carries 15,000 to 17,000. In its 10-year forecasts, the department predicts Verot will be carrying close to 25,000 vehicles per day by 2010. The calculations for 2010 assume that Camellia Boulevard will have been extended to intersect Verot (which would be widened to four lanes by then). LCG does not have any calculations on how Camellia's extension alone will impact Verot before it is widened.

A transportation study commissioned by LCG comparing the Ambassador extension to the widening of Verot estimates the Verot project will reduce total daily delays in the parish by about 750 more hours than the Ambassador addendum. It also shows almost $9,000 in total cost savings per day for drivers, factored largely from time and fuel conservation.

"From a transportation viewpoint, we believe Verot School Road has more of a potential of reducing overall delay [than Ambassador]," says LCG Transportation Director Tony Trammel. Trammel declines to speculate on how much the Ambassador Caffery extension will aid hurricane evacuation. "Our priority is not to worry about the extraordinary issues, it's to worry about the ordinary issues," he says.

City-Parish President Joey Durel, who made fixing traffic problems a cornerstone of his election campaign, says the immediate relief provided by the one-year Verot project trumps the unknown variables of the three-year Ambassador plan. "We know beyond a shadow of a doubt that we either do Verot School Road and relieve traffic today, or we wait four or five years to see what [completion of] Ambassador will do."

One major concern with extending a major commercial thoroughfare like Ambassador involves all the additional traffic it could produce ' further compounding congestion in the area.

The existing bottlenecks on Verot are what brought Durel to meet with DOTD officials last August to examine the possibility of speeding up the road's widening. At the time, DOTD told him planning on the project was nearing completion and bidding could be prioritized with MPO approval.

No matter which project gets greenlighted first, Hollier's optimistic that both projects will be completed. And he knows that patience will be required for drivers on either thruway.

"Both horses are going to finish this race," Hollier says. "We just don't know the timing. The kicker is before either of these projects is finished, we may have another 800 residential lots out there. I tell people, 'You think it's bad now? It's going to get a lot worse before it gets any better.'"