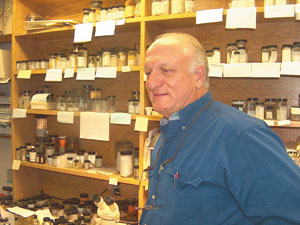 Earlier this year, 2005 was shaping up to be a banner year for UL Lafayette's computer science department. Graduate student enrollment had risen by 25 percent. Team Cajunbot again made news as UL's underdog qualifier in a U.S. Department of Defense competition to build the best autonomous, all-terrain vehicle. Construction began on the Louisiana Immersive Technologies Enterprise facility, the 3-D computer-modeling center expected to open in spring 2006. And faculty and students were eagerly anticipating the new computing capabilities from the Louisiana Optical Network Initiative, a project Gov. Blanco had pledged $40 million for that would tie UL into a high-speed research network with the nation's major universities.

Then hurricanes Katrina and Rita came.

"I think that we were on the verge of achieving a jump, not just incremental growth," says Dr. Magdy Bayoumi, head of the computer science department and director of the Center for Advanced Computer Studies.

Looming state budget cuts that threaten to severely impact higher education institutions like UL are rapidly deflating that optimism. UL and other colleges are now walking a fine line of complying with mandated cutbacks and maintaining their academic reputations.

"We were lucky in Lafayette," Bayoumi says. "We missed Katrina and Rita, but the budget cut is our hurricane right now."

Because of the hurricanes, the state is facing an estimated $960 million loss in tax revenue this year. The state Legislature began a special session last week in part to determine how it will cut spending to make up for the loss.

UL Vice President of Academic Affairs Steve Landry says the state has told UL to expect a 6 percent, or $3.7 million, cut in funding for this fiscal year, which began in July. The state is also instructing the university to prepare for what could end up being up to a 10 percent cut, which would be about a $6.3 million hit.

UL is trying to make the impact of the cuts as subtle as possible and escape having to cut whole curriculums or programs.

"What happens beyond this point?" Landry asks. "I don't know. We're executing as hard as we can to get to this 5 and 6 percent cut without jeopardizing any programs, but they're not off the table. If we go much further than this, who knows what kind of cuts we'll have to make to get there."

For the past two months, a statewide spending freeze has eliminated any overtime pay and kept the university from hiring unfilled faculty positions. It has also kept current faculty from using university funds for travel expenses or to purchase any new equipment; only a department's self-generated funds can be used for those purposes. Additionally, UL is readjusting class schedules for next semester in order to go to a four-and-a-half day workweek, which it hopes will result in significant savings in utility costs.

What's more, the university is eliminating about 100 adjunct professors from its payroll. At UL, part-time adjunct professors run the gamut from English department support staff to local attorneys who teach business law and medical practitioners who instruct in the nursing program. UL will also likely scale back on its graduate assistants, which aid in teaching classes and in research projects, though Landry could not say how many are likely to be cut. The university currently has about 350 graduate assistant positions.

Landry says the budget cuts are a work in progress, which is making it hard to plan and communicate the cuts' impact to faculty. While a 6 percent cut seems to be the current working number, Landry fears that it could be even more severe.

"I can't settle into any kind of confidence level that we've seen the end of this yet," he says. "As dynamic as this whole thing has been, I've kind of given up second-guessing anything. I came in one day two weeks ago thinking we were facing a 3 percent cut, and 24 hours later it was up to a 5 percent, and then the day before yesterday it was being articulated that it was going to be 6 percent. However, we're also being asked to turn in a 10 percent cut plan, which is drastic."

The sense of uncertainty has already been rippling through campus. Bayoumi says several members of his faculty have expressed concern over what the funding constraints will mean for the university.

"I've had many faculty come to me and say, 'Is this a sign to look for another job?'" he says. "It's a very fine line of being both serious and taking the cuts and actions that we need to maintain the fiscal integrity of the institution without scaring all my faculty."

Both Bayoumi and Dr. Darryl Felder, who heads the biology department, say their faculty is being heavily recruited now from other universities who see this as an auspicious time to lure away some of UL's finest.

"There is a real perception around the country that it's a good time to do a little sheep stealing," Felder says. "The opportunities are out there for every level [of employees] to go. There's nobody tying them down here. The grass is greener, and some will move."

They are particularly worried that some of the younger faculty may be rethinking their situation at UL.

"These are mobile people," Felder says. "We got them here because we have a strong existing program. One of my concerns is we must provide a very secure setting for them to know that things will continue, and we will continue to grow. We're not going into some type of static mode."

Bayoumi and Felder say they each have three positions within their departments that are going unfilled.

Dr. Susan Mopper, a professor in biology who also serves as director of the UL Center for Ecology and Environmental Technology, recently lost a research associate after he was recruited away by an engineering company offering double the salary to help design the next generation of offshore oil rigs.

The departure has left Mopper without a key part of her team, which in the past year has been able to help attract almost $750,000 in National Science Foundation grants.

Mopper says the university administration has told her it will work with her in finding someone to fill in those duties. However, she adds that many professors worry about how outside perceptions of UL may change.

"If NSF thinks we're downgrading, they're not going to want to fund us," Mopper says. "We have to continue to do good research here if we want to continue to get support. It's hard enough as it is being in Louisiana, which has a reputation of being weak in education and a little out of step with other states. We have to stay competitive at a high level, at a national level, which several departments at this university are. State mandated budget cuts can undermine that, which in turn will have a cascading effect on our ability to maintain a high level of research."

Mopper and her peers are trying to keep an optimistic outlook.

"The reaction of our faculty," says Bayoumi, "is we cannot leave this place while they need us because the impact of this budget cut has not been felt yet. It is like trying to be good citizens. We'll have to do our duties. But from my point of view, if this situation goes on for a long time, I'm sure I will lose faculty. No doubt about that."

Both Bayoumi and Felder compare the current budget scare to the one that followed the fallout of the oil industry in the 1980s. During that time, UL was also forced to cut back on faculty and halt new spending.

"On the heels of that, we grew nicely," Felder says. "I can't totally explain it, other than that it really got people thinking innovatively, made them scrappy and had them going out and looking for opportunities."