Vermilion and Iberia Parish residents have finally secured funding from the Louisiana Recovery Authority, but lack of a master rebuilding plan leaves their small towns at risk. 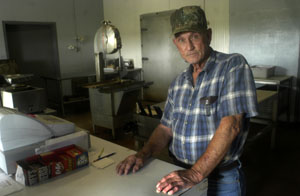 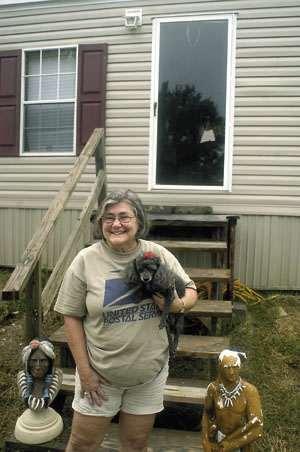 Roland Viator hasn't calmed down much. Four days after Hurricane Rita inundated lower Vermilion Parish, sweeping water into his south Abbeville meat processing plant and home, he was attempting to round up scattered cattle and angrily broadcasting his view that the shell dredging off the Louisiana coast in the 1970s and neglect of the Intracoastal Canal levees caused the widespread flooding. "There was never a history of water on my land. If the coast had been taken care of, we never would have had this," he said.

Eleven months of work getting his Circle V Meat Market back up and running hasn't softened his attitude.

"In the last 30 years, our politicians neglected our safety," he said last week. "They allowed the shell dredging and left us with a big mud hole. Those shells were there for a reason," he fumes.

When Rita hit, 67-year-old Viator and his wife, Barbara, evacuated to Abbeville to tend to his 91-year-old father and two elderly aunts. Two feet of water ruined his south-of-town home and adjacent slaughterhouse. Even more deadly was the 10-foot storm surge up the Boston Canal below Erath, which drowned the cattle on his low-lying farm. During the week following the hurricane, Viator's family helped him find his few remaining cows. But he lost his tractor and haying equipment, his calves and breeding bulls, and the grassy meadows that salt water turned into barren pastures.

Living in a FEMA trailer parked in his front yard, Viator got to work on the Circle V, opening his doors just before Christmas. "But it's been very, very slow," he says, "because of the loss of cattle." Viator predicts it will take two to three years for local herds to be rebuilt. "You've got to buy cows, got to breed them before you have a calf to slaughter and put in the freezer." Grazing is another problem. "The grass is starting to come back a little bit. But the salt is having an effect on hay, on rice and sugar cane. And we're in a drought, too."

The biggest problem, however, is the dearth of financial aid, which is preventing residents from returning home. "I didn't have flood insurance," Viator says. "Homeowner's insurance didn't pay. I registered with the Louisiana Recovery Authority, but I've never heard from them. FEMA gave us a little camper. We're retired people ' we don't want to get back into debt." For thousands of Louisiana storm victims, the lack of monetary resources to help them fix their homes feels insurmountable. Nearly a year after the storm, Viator's house is still unlivable. "I just started working on the house," Viator says. "A little bit, a little bit, I do it myself. I'm really OK. I'm doing my own thing. I'm fine."

While Louisiana Insurance Commissioner Jim Donelon continues to negotiate with insurance companies dragging their feet on paying homeowners' claims, the LRA, the agency created by Gov. Blanco to provide long range planning as the state recovers from the two hurricanes, is establishing offices across southern Louisiana for its Road Home program. The state has received more than $9 billion from HUD to provide up to $150,000 per household in aid to approximately 100,000 homeowners who have registered their losses. According to LRA board member John T. Landry, who represents Vermilion Parish, there are another 23,000 homeowners who have been identified through FEMA as eligible for the program but who have not registered. "I'm concerned that those [unregistered] people may have the greatest need, but they have become discouraged over time, or don't know about the program," he says. "It's important that anyone who thinks he is eligible come in and register. We do not have a cut-off date. We want people in the program. We want them to come home." The Road Home established a pilot housing assistance center in Baton Rouge in mid-July. The Acadiana office will be at the American Legion Hall in Erath and is scheduled to open Aug. 29.

Housing may be the first priority of the LRA, but long-range planning covers every aspect of redevelopment for Louisiana. LRA lead planner and urban designer Peter Calthorp has been holding a series of stakeholder meetings, studying economic development, infrastructure, transportation, environment, health, education and coastal restoration. Focus groups gather to discuss needs specific to their communities. The consensus of Vermilion Parish constituents at a recent stakeholder meeting in Lafayette was that a levee along the Intracoastal Canal is the parish's highest priority.

While the choice surprised Landry, it's an issue close to Roland Viator's heart. The Intracoastal Canal slices through south Louisiana's wetlands. The Vermilion Parish segment was dug in the 1940s; at that time, the spoil was piled along the banks, creating de facto levees about 12 feet high. When Hurricane Audrey hit in 1957, the levees held back the storm surge. "The water rose, but it didn't hit with any force," Viator says. "We never had floodwater here before." Unlike the reinforced levees that surround New Orleans, the Intracoastal Canal levees are unmaintained spoil banks that have eroded to about 4 feet high. "The levee needs to be put back to protect the marshland," he says. "That protects us."

Louisiana has been losing coastline at the rate of 25 square miles a year, destruction associated in part with oil and gas exploration and production activities. Plans to restore the coast and wetlands went begging, a political stepchild of the federal government for the last 25 years. The state received a mere $50 million a year since 1990 through the Breaux Act, a grain of sand when it comes to the comprehensive erosion control projects projected to carry a $14 billion price tag before the hurricanes. Louisiana's coastal land loss due to Katrina and Rita ' calculated at about 200 square miles ' creates an even greater vulnerability.

With the stakes raised so much higher, Gov. Blanco filed suit to stop the U.S. Interior Department's August sale of oil and gas leases in the western Gulf of Mexico off the Louisiana and Texas coasts, charging that the federal government has not conducted a "meaningful review" of the hurricanes' impacts on the wetlands. While a federal judge rejected the governor's attempt to block sales last week, U.S. District Judge Kurt Engelhardt indicated in his ruling that the state has a substantial likelihood of prevailing at the November trial, based on the Interior Department and Minerals Management Service's questionable compliance with federal laws designed to protect the environment. The state receives 27 percent of the federal government's royalties for oil and gas production three to six miles off the coast, which averages about $30 million a year. Beyond six miles the federal government collects all royalties, totaling $5 billion last year. Blanco wants a larger share for the state to help restore and protect the coast from future storms. "Thank God Kathleen Blanco picked this up," Viator says. "She's going to fight for us."

Currently, federal legislation designed to give the state more of the Outer Continental Shelf revenues is in conference committee. The House version provides as much as $9 billion over 10 years and a 50 percent share ' about $2 billion annually after 2017 ' while the Senate bill gives Louisiana 37.5 percent of new drilling leases, about $200 million over 10 years, and $650 million annually after 2017. Once a compromise is reached, and the state passes a constitutional amendment to create a dedicated funding mechanism, OCS funds will be entirely dedicated to the state's coastal protection and restoration program.

Combining economic development with hurricane protection and coastal erosion projects is the thrust of Calthorp's master plan. One project already on the books before Rita hit southwest Louisiana was the dredging of the Intracoastal Canal from the Port of Iberia to Freshwater Bayou Locks to provide the ports of Iberia and Vermilion with deep water access to the Gulf of Mexico. "We want to direct the [Army] Corps [of Engineers] to pile up the spoil from the dredging along the northern bank of the canal to create a levee, rather than equally on both banks, to help with surge protection. But getting the Corps to change the scope of a project takes an act of Congress," says a clearly frustrated Landry. "Once we changed the word from 'levee' to 'spoil bank' they were more amenable. Between the Corps' engineering and Cajun engineering, ours might work out better at the end of the day. But will it keep Erath from flooding? Who knows."

Levees aren't the only solution for storm surge protection. Internationally recognized urban planner Andrés Duany held a series of LRA-sponsored charrettes in February in south Abbeville, Erath and Delcambre to explore ways to mitigate the risk to the frequently flooded communities. The plans that emerged after a week of immersion in the culture of the small towns were innovative and controversial. Delcambre's low-lying areas adjacent to Bayou Carlin, where the shrimp fleet docks, could become a marina. Houses in the eight-block area which received up to 10 feet of water during the storm are eligible for a buy-out through the state's hazard mitigation program. In Erath, Duany proposed an even more radical plan, moving much of the town to high ground north of Highway 14. The Road Home program is designed to repair, rebuild or buy out damaged houses, and the LRA published a planning book to help home owners reconstruct in architectural styles consistent with the Louisiana vernacular. But the Housing and Urban Development money is not designated for infrastructure, which both Delcambre and Erath sorely need in order to proceed with Duany's plan.

The mayors of Delcambre and Erath have been encouraged as their residents return and set up house in FEMA trailers while fixing their homes. Delcambre is back to about 75 percent of its pre-storm population, while 98 percent of Erath residents are home. But the future of these small towns with aging populations ' the average age is 50 or over ' is still very much up in the air. Delcambre's city hall and police station is still in a trailer. "We're begging the state to help with our operating expenses," says Delcambre Mayor Carol Broussard. "We're barely taking in enough revenue." If the population drops below 1,000, Broussard says the town won't be able to afford essential services such as police and fire departments.

"We'd like to go forward with the [Duany] plan," Broussard continues, "but we have not had any indication from the LRA that the plans will be funded." Without the move to higher ground, both Delcambre and Erath, as well as all of coastal Louisiana, continue to be at high risk of a repeat of the disastrous flooding from hurricanes Rita and Katrina.

Neither wind nor water scares Kathy Louviere. Her trailer in the Bayou Tigre community below Delcambre was shredded by tornado-like gusts, then flooded in the rising waters of Rita. Three times, Louviere has lost her home, to hurricanes Andrew, Lili and Rita. "We know to get out when there's a hurricane," she told The Independent Weekly last September. "Then we come home." Louviere's insurance paid for a brand new trailer perched high on 2-foot piers on top of a mound of dirt raised to meet the base flood elevation requirements of 11 feet above sea level.

Louviere, her boyfriend and grandsons Ryan and Logan were the first residents to return to Bayou Tigre. They had a camper back on their land within a month. Today, they have a pond in the back yard that chirps with the song of tree frogs at dusk. There's a ramshackle sort of normalcy in the small community, defined by clusters of FEMA trailers and houses in various stages of repair. As the first anniversary of Hurricane Rita approaches, Louviere says she doesn't worry much. "If another storm comes, it comes," she says. "We're just going to live day to day."