Will the World Delta Dialogues be enough to save America's - and Louisiana's - wetlands? By Cherry Fisher May

Even a reluctant student of history is usually at least curious about the many civilizations and societies that have disappeared since the dawn of recorded time. The Anasazi. The Maya. The Roman Empire. The Soviet Union. What caused them to fail?
Will the World Delta Dialogues be enough to save America's - and Louisiana's - wetlands? By Cherry Fisher May

Even a reluctant student of history is usually at least curious about the many civilizations and societies that have disappeared since the dawn of recorded time. The Anasazi. The Maya. The Roman Empire. The Soviet Union. What caused them to fail?

Why did others to survive?

A few years ago respected UCLA scholar of biogeography Dr. Jared Diamond published a fascinating study of the topic in a book called Collapse: How Societies Choose to Fail or Succeed. He cites inadvertent human-induced environmental damage as one of five key factors that can cause a society to expire, and with today's increasingly powerful engineering and technology tools, it could be a growing force.

"Many people fear ecocide has now come to overshadow nuclear war and emerging diseases as a threat to global civilization," he writes.

Early in human history, societal collapse could mean the extinction of an entire tribe or community. Today in a modern First World society like ours, Diamond says it takes other forms: lower living standards, a scarcity of resources, a change in community values. Sound familiar? Because of the impact it would have across the continent, these are exactly the predictions for what the U.S. as a whole will experience if Louisiana's coastline continues to disintegrate at current rates. 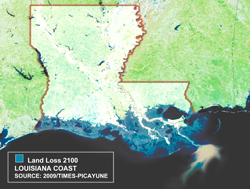 While no one is yet predicting full-scale collapse, it would not be overstating Louisiana's case to say that the ecocide occurring in our wetlands, if left unchecked, will negatively impact the quality of life for all Americans. Acknowledging the imminent threat at the World Delta Dialogues conference Oct. 17-20 in New Orleans, noted historian Douglas Brinkley called for an urgent response at all levels of government, suggesting "a real $20 billion restoration fund" pooled from every possible private and public source. "We saved The Smokies, Yosemite and The Arctic Refuge. We can also save the Delta," Brinkley said.

The WDD brought a diverse group of stakeholders from around the world together to discuss global coastal vulnerabilities like rising sea levels and land loss, using the Mississippi River Delta as a model. Co-hosted by America's Wetland Foundation, the Royal Netherlands Embassy, The Nature Conservancy and the Greater New Orleans Foundation, this first-ever conference included charrettes that put everyone together at the table: conservationists, scientists, engineers, politicians, oil and gas executives and more.

Traditionally considered the bad guys, responsible energy producers like Chevron and Shell are now playing an active role in the search for solutions. Noting that the Delta is suffering the greatest land loss on the planet, Shell Executive Vice President John Hollowell predicted a 50-year growing demand for oil and gas that can only be met if Louisiana's wetlands are protected. Even the representative of the Army Corps of Engineers acknowledged the urgent need for a new plan.

Participants were reminded repeatedly to check their special interests at the door. Dr. Robert Twilley of UL Lafayette, who played a major role at the conference, explained the history of deterioration in the Mississippi Delta as a result unintended consequences of the levee system built after the great flood of 1927. "The priority then was economic expansion (navigation) and public safety (flood control)," he said. "Now we need to convert from flood control to controlled flood." He outlined goals for the WDD charrette teams: rebuild the wetlands using natural processes so that they would be self-sustaining; design intelligent storm and flood protection; protect and enhance Louisiana's productive, innovative economy; and protect the region's dynamic culture and communities.

There is general agreement on most of the major points. Sediment is the key to rebuilding the wetlands. Scientists and engineers have the knowledge to begin immediately to design and implement systems that meet all the objectives Twilley outlined. ("Further research is not required," said Dr. Chris Paola, a lead researcher at the National Center for Earth Surface Dynamics in Minneapolis, a quote which quickly became the mantra of the conference.) It's more expensive not to do it; doing it would be an economic boon for Louisiana, which could join The Netherlands as a world center for environmental restoration.

But the challenges are many. "First, political partisanship and parochialism is a huge impediment to solving complex long-term problems like Louisiana's coastal collapse," says Wetlands Foundation Managing Director Val Marmillon. "WDD proposed new funding mechanisms not tied to two- or four-year political cycles. Second, with nonrecurring funding, a central authority is critical to providing leadership to manage priorities and negotiate trade-offs that arise with sustaining massive landscapes. Third, there is no policy for degrading deltas but a morass of conflicting policies from federal and state agencies that must be corrected. Finally, we need to deal with the reality of [either] building resilient communities or preparing people to leave before they lose their property values, affordable insurance and local services. For all of the above, [an immediate move] to action beyond study is imperative."

Eighteen months in the planning, WDD was a brilliant idea. In one fell swoop, it put Louisiana's coastline squarely in the middle of a global conversation about disintegrating deltas. It tapped some of the best minds and the biggest players on the planet who can help save not only our coast but others. Time will tell whether our community can hobble together a plan and our nation will fund the solution.

Unfortunately, both time and tide are working against us.