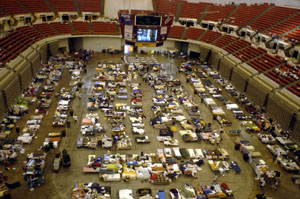 "That was a one-time deal."

"They must be working off of an old list."

"No, we now have an agreement [to house] Entergy employees."

"I don't think we've used a school as a shelter since [Hurricane] Andrew."

"In the event of an emergency, we'll certainly help out our fellow man, but it may not be to the extent we did the first time around."

These are some of the responses given to The Independent Weekly when we began calling sites on the state's list of potential emergency public shelters. One year after Katrina raised serious questions about the adequacy of Louisiana's emergency evacuation and ability to house evacuees, confusion and bureaucratic finger-pointing still plague the state's shelter program.

The Independent Weekly first requested the state's shelter list in May. Shortly afterward, the Governor's Office of Homeland Security and Emergency Preparedness issued a press release proclaiming it had boosted in-state shelter capacity by 22 percent. In the same release, it stated that "although some media outlets have requested a list of shelters, the state and the American Red Cross will not release such a list."

The Independent followed up with a public records request for the shelter list to both GOHSEP and the state Department of Social Services, the agency responsible for coordinating shelters. After GOHSEP and DSS went back and forth with each other for weeks over which agency was responsible for the list, The Independent Weekly received what was called a "working list of parish-sponsored shelters" from the Attorney General's Office. An accompanying letter stressed that "this is an inventory of potential locations" for evacuees who have their own personal transportation. (The state has designated the former "State Farm building" in Monroe and the Hirsch Coliseum in Shreveport as public shelters for those who need state transportation.)

"Any, all, or none of the locations could be activated depending upon the nature and circumstances of the weather event," according to the letter accompanying the official list of potential shelters. "The official list of shelters will develop as the event occurs. This inventory is a very fluid, dynamic document."

The A.G.'s office also requested that The Independent refrain from publishing the names of any of the sites. "Disclosure of a list of potential shelters which may not be opened may cause loss of life and may lead to confusion during the evacuation process."

When The Independent Weekly began calling the listed shelter sites, it quickly became apparent that the state had failed to notify multiple locations of their designation and potential duty. Of the 10 site managers contacted, four said they either didn't plan to open or may not be able to function as a shelter.

The Burton Coliseum in Lake Charles is listed by the state as a potential long-term public shelter for 2,000 people. But Assistant Director Mitzi LaComb says it's her understanding the building will no longer operate as a public shelter. She believes the arena now has an agreement with Entergy to exclusively house its utility workers during the event of a major storm in their area. The building's director, Mark Ethridge, could not be reached by press time.

At the Dream Center, a church auditorium in Donaldsonville the state says can take in 350 people for short-term care, pastor Elizabeth Demarest says the center has no intentions of opening as a shelter again, calling the shelter the church ran following Hurricane Katrina a "one-time deal."

The state also has The Donahue Family Church in Pineville listed as a short-term shelter for 100 people. Tina Young, the pastor's secretary, said after talking with church officials she is not sure if the church could operate as a shelter again, as it did following Hurricane Katrina. Young says a new school and daycare center are now taking up the area that was previously used to house evacuees.

In Lafayette Parish, Parks and Recreation Director Gerald Boudreaux says he thought the state was working to move all shelter operations north of Lafayette. He was especially surprised to hear that the George Dupuis Rec Center was listed as a potential long-term shelter site for 200 people. "They must be working off of an old list, cause we didn't even use that one last time [for hurricanes Katrina and Rita]," he says.

Other site managers expressed different concerns. All five Lafayette Parish public high schools are listed as potential shelters, able to take in a total of more than 1,800 evacuees. Mona Bernard, who serves as both risk manager and human resources director for the Lafayette Parish School System, says she would be surprised if the state called to use any of Lafayette's public schools as shelters in the event of a major storm.

"I don't think we've used a school as a shelter since Hurricane Andrew," Bernard says. "They're really not preferred places. They usually don't use our facilities because we have to resume our [school] operation, and we would not be able to if they had these folks in there."

The West Monroe Convention Center is listed by DSS as a short term shelter for 400 people. Darren Burgess, the center's director, says he told the American Red Cross that its organization is welcome to use the facility again in the event of another emergency. However, Burgess qualified that by adding that he didn't expect the city of West Monroe, or other areas, to help with sheltering operations to the extent they did during Hurricane Katrina.

"We never got paid," Burgess says. "I spent about three months filling out all the paperwork as to the city's expenses, down to every last overtime hour for police to every dollar that we spent feeding the evacuees, and never saw a penny." Burgess says the expenses ' totaling about $200,000 ' mostly involved feeding evacuees and transporting them to showering facilities.

"For a small city," Burgees says, "it's not a huge municipal budget; $200,000 is a kick in the pants, and we've just pretty much had to write all of that off. So, in the event of an emergency, we'll certainly help out our fellow man, but it may not be to the extent we did the first time around. I feel like if something does happen this year, there's going to be a lot of people who are a little more reluctant in North Louisiana to help out. It sort of left a bad taste in a lot of people's mouths up here."

When told certain site managers on the state's list were unaware of the role they may be called on to play in the event of emergency sheltering operations, DSS spokeswoman Cleo Allen said all of the sites had a memorandum of understanding with the Red Cross or the Office of Emergency Preparedness to operate as a shelter. She also asked The Independent Weekly for the names of all the shelters we contacted.

The next day, she called back to say that she was mistaken and there were no memorandums of understanding for each site location. She also could not answer questions regarding what guidelines were used in designating some sites on the shelter list as short term and others as long term, saying her office was in the middle of moving. Asked if there was another DSS representative who could respond, Allen said, "No, just imagine how hectic it is. We're trying to move 900 people, and I'm sitting around with boxes and they're coming to take my Blackberry in a few minutes, and we're supposed to be off the computer by 11:45, so it's just not possible."

The shelter list DSS provided to The Independent Weekly is supposed to be an inventory of all usable shelters in the state, and a reflection of the state's total shelter capacity. In the event of a threatening storm, the state's shelter task force, the American Red Cross and each parish's office of emergency preparedness uses this list to determine which shelters to open. However, Bill Vincent, director of the Lafayette Parish Office of Homeland Security and Emergency Preparedness, says the list means very little.

"Those are just a list of possibilities," he says. "It's not meant to be all inclusive or to guarantee in any way. Basically, the fact is that we make the decisions at the time [of an emergency] as to what buildings to use, based on the circumstances, and that's what you have to do. So we can't say ahead of time that the George Dupuis Center would be used for this event. It doesn't necessarily mean that we would not use some building that was not on that list."

He adds DSS' master list is a compilation of lists of potential sites that each parish has sent to the state. "I think it's some kind of thing where [DSS] has to prepare a report to the Governor's office of the total number of shelters in Louisiana, so they come to each parish and say 'Gimme some shelter.' You know, how many? They'll ask for lists. And we'll make it clear that this is just a contingency list, but nevertheless they want a list."

The amount of available shelter space the state can provide has recently been a frequent bone of contention between state and federal officials. Louisiana officials have requested assistance from FEMA and the U.S. Department of Homeland Security in locating shelter sites. At the start of hurricane season, the state reported to U.S. Homeland Security that additional shelter space for up to 220,000 people may be needed to augment the state's limited capacity. Federal officials have fired back that the state is not doing enough to identify in-state shelter space.

In a June 3 interview with the Times-Picayune, Homeland Security Secretary Michael Chertoff said the state's low estimates for shelter capacity reflected unwillingness by some to open their doors in a time of need. "Based on the numbers, I can only conclude reluctance," Chertoff said.

Last week, state and federal officials were still disputing the maximum in-state shelter capacity. Federal officials contended Louisiana could house 150,000 evacuees, while the state homeland security chief said the number of beds the state could provide was closer to 85,000. The list of shelters sites that The Independent Weekly received through DSS lists a total shelter capacity of 121,754.

When Tropical Storm Chris formed in early August, New Orleans Mayor Ray Nagin held a press conference to assure residents that the Crescent City's revamped evacuation plan was ready for implementation if necessary. "We don't have any holes; our plan has been worked on ad nauseum since Katrina," he said. But he was concerned about one major issue that is the state's responsibility. "The only hole that is out there is, 'Where are the shelters? Where are the shelters outside the city?'"

Nearly one year after Katrina and Rita, no one seems to know the answer to that question.

To view the state list of potential emergency shelter sites, download a PDF version at www.theind.com/special/shelters.pdf. The state has advised that this is a working list and that none of these sites can be counted on to be open during any given emergency event. The Independent Weekly cautions readers that this list may be an inaccurate representation of which shelters may actually open in the event of a major hurricane or other emergency.