He brought dignity and integrity to the political arena and won the trust of his constituents by delivering on his promises. 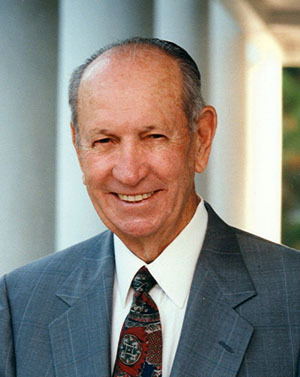 The two men in politics I admired most were Ronald Reagan and J. Rayburn Bertrand. This may sound like an exaggeration, but it's true. I did not know the former president personally, though I interviewed him once on radio and met him before he was elected. I did have the good fortune of knowing Ray Bertrand personally, and he was a friend of mine for more than 40 years.

When I was hired at KVOL in 1960, I had been covering politics for several years reporting on the likes of Earl K. Long, B. B. "Sixty" Rayburn and Willie Rainach. I was intrigued by Lafayette's unique three-trustee form of government. The tall, soft-spoken, 41-year-old mayor who had just been elected to lead this small city in transition also fascinated me. We were beginning to be seriously impacted by the rapid growth of the oil industry, the expansion of the university and our geographic location as the hub of Southwest Louisiana.

Ray Bertrand was the perfect match for the time and place. He brought dignity and integrity to the political arena and won the trust of his constituents by delivering on his promises. I was impressed with the fact that he took the time to explain to this young reporter, new on the scene, the intricacies and players of the political network in Lafayette and his personal vision and agenda for its future. Maybe it was his pilot training that had him always focused on the horizon, always planning far ahead of his contemporaries.

It has all been recited in the past week: Lafayette's population nearly doubling in his 12 years in office and its physical size nearly tripling; the phenomenal economic development of the area; and accelerated street, sewer, drainage and recreation projects to keep up with the amazing growth. Through it all he served with unwavering good humor, courtesy and poise.

Admittedly, this was a different time with different standards. For instance, we in the media seldom questioned the fact that the three trustees always held closed meetings before the required public meetings. Differences were discussed and solved away from public scrutiny ' or maybe more importantly, away from reporters and cameras that today tend to encourage exaggerated posturing and rhetoric. I don't recall one time at the public meetings when the vote on any subject was not unanimous. This is not said to condone secret government operations but, because of the character of the people involved, led by Ray Bertrand, it worked. Could it today? Probably not.

After three highly successful terms as Lafayette's mayor, he graciously stepped back into private life and continued his personal successes in the banking industry. It's a fact of political life that once you enter the arena, you are known as a politician. So it's natural that most of the conversation following Bertrand's passing centered on the relatively short 12 years he served in political office. But he should also be remembered for the long, lonely and dangerous missions he flew as a fighter pilot during World War II. That discipline and respect continued when he left the public arena. He continued his unselfish service in numerous community affairs and always had a warm smile, a firm handshake for friends and acquaintances and a deep love for his family.

He was deeply saddened when he lost his first wife and dedicated soul mate, Julie. But he also recognized and often remarked on his great good fortune of finding the love and companionship of his aptly named second wife, Faith.

I was deeply moved when, in 1992, Ray introduced me at a campaign function and endorsed my candidacy for mayor of Lafayette. When I lost in that oh-so-close runoff, he was one of the first of many phone calls I received. He said, with a soft chuckle, "Ron, I know you already realize this, but I just want to reassure you, there is life after politics."

We can all be thankful that Ray Bertrand gave us so much of the best of his life ' publicly and privately.

Ron Gomez is a former broadcaster and legislator and the author of two books, My Name is Ron and I'm a Recovering Legislator and Pelican Games. He currently owns Edge Communications, an advertising and public relations firm.