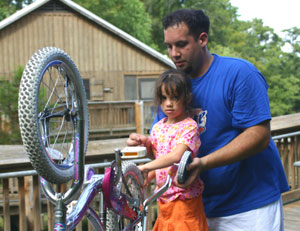 Derek Ramirez tightens the bolts on a training wheel for a small pink bicycle. His 5-year-old daughter, Alexis, watches him anxiously. She's waiting to ride her new bike, and once Derek assembles it, she hops on and takes off down the wooden ramp from their cabin at Lake Fausse Pointe State Park in St. Martin Parish. Derek's nephew, 6-year-old Dante Ramirez, bobs a minnow at the end of his fishing pole in the waters of the lake, hoping to reel in a bass.

The sun's shining brightly, but the bucolic family scene is no vacation. Thirty members of the extended family from St. Bernard Parish have found refuge in the quiet cabins of Lake Fausse Pointe State Park. Thirteen parks in the state system have thrown open their log cabin doors to house evacuees from Hurricane Katrina; seven parks are closed until further notice due to the storm. The system has waived fees for rentals for the month of September, and the cabins become available on a first-come, first-serve basis, as some evacuees return to their homes.

For the Ramirez family, that won't be for a long, long time.

St. Bernard officials have announced that the parish, which is almost entirely submerged, won't be open for six months to a year. Just how long the family can hold out in the park is a question they consider every day. While the park is lush and serene and the cabins are comfortable, being 45 minutes away from the nearest government offices in New Iberia or St. Martinville has caused problems. The most acute challenge is the lack of cell phone service.

There's no signal in the park. Evacuees have attempted standing on top of the Atchafalaya Basin levee just outside of the park for cell service, but coupled with the frustration of calling FEMA, which can take days, it's a nearly insurmountable situation. To help, the office at the park has made a computer available to evacuees living in the park. Manager Waylon King estimates there are about 30 families sharing 18 cabins currently, and the massive diaspora of people ' the extended family of Ramirezs, Bernards, Robertsons and Diecidues ' feel like they are being lost in the shuffle.

"Everything in the U.S. government is all confused," Suzanne Bernard says. Her nephew, Rickey Diecidue Jr., can barely contain his anger at what he says is total incompetence. "To begin with, the people who answer the phone at FEMA are rude. They don't listen when you are trying to tell them something. They asked us for an address. All they would take is our Violet address. We tried to tell them there was no post office left in Violet, no mailbox, no house. But they mailed the check to St. Bernard Parish anyway."

"We called FEMA back," says Wanda Robertson, Ricky's mother. "We told them we don't have any money, that they sent our checks to St. Bernard. We asked, 'What should we do?' They told us to go to a shelter."

Before the storm, the extended family of shrimpers and oil field workers lived closely intertwined lives in the small town of Violet, located between the Mississippi River and Lake Borgne below New Orleans. Some fled the storm, some rode it out on the Ramirez family's shrimp boat before finding sanctuary together at Lake Fausse Pointe. They have lost most of what they own and say that their first priority is to find a place for the whole family to live.

"We don't know which way to turn," Suzanne Bernard says. "What's holding us together is that we are a strong family. All we have left in the world is each other. Nobody came to rescue us in St. Bernard. We had to rescue ourselves. We are the forgotten people."

James and Juana Adams and their children have a brighter outlook at Cypremort Point State Park on the edge of Vermilion Bay. Six cabins rise 17 feet above the beach, affording residents salt breezes and views of spectacular sunsets. There are cell phone towers at The Point, and the Lydia branch library, about 10 miles away, has several computers available to the public. The Adams family's house in Kenner, just blocks from Lake Pontchartrain, was flooded with a foot of water. John Adams, an engineer for Edison Chouest Offshore, still has a job. He's making plans to go home as soon as possible and begin ripping out carpets and sheetrock to get his house back in order.

"All in all, we fared well, considering," he says. "FEMA came this morning. People are getting their $2,000. The Red Cross comes out once a day with cooked supper."

"We're lucky," he adds. "It's beautiful here. I'm going to buy a powerball ticket. Every day, our luck's getting better."