After ditching a roadside carnival about 35 years ago to raise grandbabies and fight chickens in south Louisiana, Judy Duthu now wonders what will happen to her way of life. 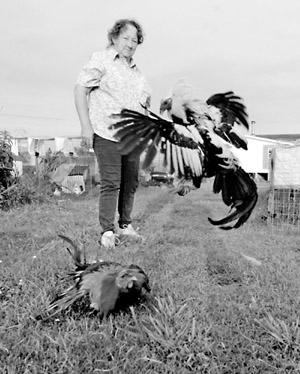 When the traveling carnival left Crawford County in 1972, Judy Duthu ran away with it, having been terribly smitten by a young man operating the sideline games. At the impressionable age of 23, her sleepy, agricultural milieu in southern Indiana just couldn't compete with the allure of life on the road and adventures around every corner. "All of those games were rigged," Duthu, now 58, recalls with a giggle. "They were crooked, fixed. I guess I was just drawn to the danger of it all, the seediness. But I was in charge of the children's games, where they pull a duck from the pond or toss rings, which weren't like that. I really had some fun times."

Yet the price of the ticket wasn't worth the ride. Her initial infatuation with the games manager ended up being a foolish crush, and the impetuous decision to be a carny, nothing more than a "youthful indiscretion." The roads looked the same no matter where the carnival went and, about two years into Duthu's new gig, one led to Thibodaux, the municipal and cultural heart of Lafourche Parish. "Oh, the food and the music and the people," Duthu says. "I was hooked, just like everyone else who comes down here. The first thing I did when I got into town was have a cup of chicory coffee. The more cream and sugar I added, the worse it tasted. When everyone with the carnival wintered down that year in different parts of the country, I came back and wintered in Thibodaux. There was just no looking back."

Duthu had discovered a strand of Louisiana's Cajun lineage near the Gulf of Mexico, the kind often ignored by those spicy and jazzy marketing campaigns. Now smitten with a way of life rather than a boy, Duthu ultimately settled in Montegut, a small coastal hamlet of maybe 600 households in Terrebonne Parish, where she still resides today and maintains a small farm. Over the years she has adjusted to and embraced all the changes that come with invading a new culture ' no-meat Fridays during Lent, Mardi Gras schedules, bayou politics.

About 10 years ago, Duthu was introduced to cockfighting and game fowl breeding. At the outset, her interest in the legal competitions, deemed barbaric by animal-rights activists, was passing. But the pedigree side of the industry, the livestock aspect, suited her. By 2003, Duthu had become entrenched in what she calls a "Louisiana cultural tradition." Along with her husband, Duthu has invested thousands of dollars and countless time into the dream of breeding championship cockfighting birds.

That aspiration, however, is now gone because Duthu doesn't want to be fined by the government or put in prison. Cockfighting isn't illegal in Louisiana yet, but Duthu can see the political writing on the wall. New Mexico banned cockfighting in March, citing cruelty concerns, which left Louisiana as the nation's last holdout. Public pressure nationwide has been intense and, only a few days into the regular session, both chambers of the Legislature were moving bills last week that ban and criminalize cockfighting to various degrees.

The quick action should allow ample breathing room ' the session must end June 28 ' for all of the interested parties to read between the lines and draw a compromise. The House, in its first full hearing on cockfighting in recent memory, endorsed House Bill 108 by Rep. Harold Ritchie, a Bogalusa Democrat, which would make the practice illegal on Aug. 15, 2008. On the Senate side, the upper chamber is considering Senate Bill 39 by Sen. Art Lentini, R-Kenner, which would shut down the industry on the same date, only this year. Gov. Kathleen Blanco has repeatedly said she is ready to sign a bill banning the bloody sport, but it's unknown what the finished product will look like.

Pinckney A. Wood, president of Humane HEART and chairman of the Louisiana Animal Welfare Commission, says cockfighting needs to be abolished immediately to prevent a media feeding frenzy and large-scale tournaments. He also says game fowl deaths would skyrocket as handlers try to fight off as many birds as possible prior to the deadline. "That being the case, it is essential to have serious penalties regarding cockfighting so that incidental fighting of birds after the enactment of a cockfighting prohibition would be discouraged in a way that the cockfighters would respect," Wood says. "Namely, if you do it you are going to prison."

Both House and Senate versions offer such threats, with possible prison sentences topping six months and fines ranging upwards to $2,000.

It's a sobering reality to Duthu, who has come to link her Louisiana roots with cockfighting. Duthu says it's unfortunate that she and her husband, a pipefitter, chose to invest their retirement money in cockfighting instead of a 401(K), and now it's about to get wiped out. "With a $300 light bill, Social Security even won't do much," she says. "These birds were supposed to be part of our retirement income, and we are going to lose that. They are taking that away from us."

Duthu, who favors a phase-out of cockfighting over an immediate ban, doesn't currently sell game fowl, but she does trade and give them away to other cockfighters. "We've spent thousands on a breeding regime so people would eventually want to buy them," she says. "It's not the cockfighting for me, but watching the little birdies hatch and grow up. We haven't made any money at all from cockfighting yet, but you can develop a name for yourself based on the quality of the birds and people will wait in lines to pay $3,000 for a trio. That is what we were building up to."

A grandmother of four, Duthu says cockfighting is extremely popular in her family. Her son, along with others members of the brood, are "pretty good" cockfighters, and she has even nicknamed her most recent grandson, Conner, "Short-Line," cocking terminology for the final fight between fowl, when the claws are unleashed and feathers fly, most often resulting in a win or a kill. "He has two of his own birds and he was going to be a cockfighter," Duthu says. "We have pictures of him in the house with the birds."

The Duthu home sits on two acres of farmland off of Aragon Road in Montegut, where the game fowl are raised alongside award-winning breeds of rabbits and geese. Grandma Duthu admits she has recently become more fond of the actual sport of cockfighting and doesn't mind "getting in the pit and handling the birds." When the new law takes effect, whenever and if that might be, Duthu says she will continue to raise her game fowl, but will no longer take part in cockfighting.

Much like her interest in the traveling carnival, the cocking part Duthu's life is coming to a close. Asked if a future without cockfighting might be a safer place for her beloved fowl, Duthu shrugs off the suggestion and defends the sport. "I could see where it could possibly be perceived as ironic, to care for something and send it off, but in the long run, if you don't have the right birds to get the job done, you shouldn't have them in the pen," she says. "You raise the type of bird that leaves its opponent dead. You raise winners. Chickens are chickens. Chickens are not pets."