The Pape family of Avondale claims they were evicted from Lafayette's Ramada Inn. 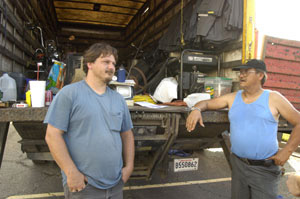 In the parking lot of the Cajundome, Al Pape Sr. and his son, Al Pape Jr., are watching the local news on a small television resting on the tailgate of one of their company's trucks. The two Avondale men packed up their families ' five adults, three children, three cats and two dogs ' and left their homes on Sunday. They spent $250 in gas moving their vehicles, and it took them eight hours to pack up, but Al Sr. says, "We still left a lot of stuff." The two men transport waste tires to recycling centers for a living, and their two trucks are their livelihood. Senior doubts his business will survive. "It's a lifetime of work, and we just lost it all. Our house was paid for. I've got about $10,000 worth of antique swords and daggers. My wife's got a lot of porcelain dolls."

As they traveled west, they called hotels all the way trying to find rooms. "We tried all the way to El Paso, Texas," Al Jr. says. They found a room at the Ramada Inn in Lafayette.

"They had a room with no air conditioning," the elder Pape says. "We said, 'We'll take it.' We needed the bathroom and the water. Then they turned around and told us they got an air-conditioned room, and we said OK. We kept asking for [further] reservations, and they kept saying they weren't taking reservations. So this afternoon the guy tells us, 'You gotta go. We got reservations.'" He doesn't know what the problem was since the hotel had his credit card on file and could charge him for every day his family was there.

"Next thing you know there was a cop knocking at the door," he adds, "and he was real nice. The Lafayette police were super."

Eric Norris, the Ramada Inn's general manager, declined comment on the Pape family situation and also declined comment when asked if guests were being allowed to stay in the hotel for an indefinite amount of time. "If I had 500 other rooms," he says, "I could probably rent them." Norris says that just about all of the guests of the Ramada Inn have fled from the New Orleans area.

On Tuesday, Aug. 30, the Lafayette Convention and Visitors Commission sent out a fax to local hotels. The fax requested, at the urging of Lt. Gov. Mitch Landrieu, to allow guests to extend their stays for as long as needed and asked that hotel staff members contact individuals with prior reservations to ask them to make other plans. (On Friday, Gov. Kathleen Blanco ordered all Louisiana hotels to continue to house evacuees.)

"Please keep in mind that the people you are refusing to extend reservations for have nowhere to go," the fax states. "They have lost their homes and are looking for us to help." The fax also reported that Lafayette Police Chief Randy Hundley "has advised his officers not enforce" a Louisiana law concerning the eviction of hotel guests.

Cpl. Mark Francis of the Lafayette Police Department says that's not the case. "We're going to evaluate every case on a case by case basis," he says. "Of course, we will follow the law in every case. We're not turning a blind eye to the law. We'll evaluate the situations, and by no means are we going to do anything that would violate the law."

Louisiana Revised Statute 21:75 states that a hotel guest cannot stay in a room past the time agreed upon when checking in, but has to be given an hour's notice to vacate. Revised Statute 21:76 makes it possible for an "appropriate lawful authority" to evict a guest if the conditions of the previous statute have been met, but does allow for an exception of "serious medical emergency requiring the continued use of the room or campsite."

Breaux says there are an estimated 4,750 hotel rooms in Lafayette. "We're trying to see if there are any rooms available," he says, "and there are none that we know of."

In the meantime, the Papes have found refuge at the Cajundome. "We've been trying to rent a house," the elder Pape says, "because we figured we were going to be here for a while. A couple of places we talked to wanted $450 a week. That's almost $2,000 a month to rent a house. That's crazy."

But he also says it's difficult to even think of any long term plans now. "You just go day by day," he says. "It's taking time for it to sink in. It's so hard to even think about anything."