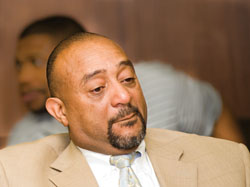 A former district prosecutor, who lied to federal investigators and tried to conceal his assets, faces up to five years in the slammer for tax evasion. By Leslie Turk

A former district prosecutor, who lied to federal investigators and tried to conceal his assets, faces up to five years in the slammer for tax evasion. By Leslie Turk

A federal probe involving former Assistant District Attorney J. Floyd Johnson, broken by The Independent Weekly in February, seemingly came to a conclusion in U.S. District Court Nov. 10 with Johnson's guilty plea to one count of tax evasion and the revelation that he concealed ownership of a home, lying to federal investigators about it.

Johnson, 50, entered the plea before U.S. District Judge Richard T. Haik in Lafayette. In July, while still a prosecutor with 15th Judicial District Attorney Mike Harson's office, he was charged in a bill of information with the single count of tax evasion and resigned from the DA's office shortly thereafter. Johnson, who had been with the DA's office for 15 years when he resigned in July, was making about $83,000 as a full-time prosecutor.

At sentencing, Johnson faces up to five years in prison, a $100,000 fine, and a mandatory minimum term of not less than two years and not more than three years supervised release following confinement. A presentence report, which normally take about 90 days to complete, was ordered in court last week; Johnson will be sentenced by Haik after the U.S. Probation Office completes the report. As part of that presentence investigation, the government is turning over all evidence developed in its probe of Johnson.

Because Johnson notified officials of his intention to plead guilty in a timely fashion, which allowed the government to avoid the expense of preparing for trial, he will get a "one-point reduction in his offense level should that offense level be 16 or greater," according to the plea agreement filed in court last week. Close legal observers say the fact that he was an officer of the court charged with seeking punishment for those who broke the law - in particular the lead prosecutor in drug cases - does not bode well for him at sentencing. Those observers say it is highly likely he will do time.

Already, the felony conviction means he will lose his law license, right to vote, right to run for office and right to possess a firearm. Because of the nature of his crime - that he used a client trust account to hide income - he may face permanent disbarment, a former prosecutor tells the paper.

Government officials say Johnson lied about owning a home and property at 206 Woodrich Lane, telling investigators the home belonged to his brother.

In court documents, federal prosecutors say Johnson failed to file his federal income tax return in 2003 after receiving income from his salary at the DA's office and his private law practice totaling $259,371 (several sources have told this newspaper that they were unaware Johnson even had a private law practice). He did not pay approximately $84,581 in federal income tax for 2003, having been paid $71,536 that year from the DA's office and taking in $187,835 in self-employment income. In order to avoid the payment of taxes, interest and penalties due on assets and income, Johnson purchased property, including his current residence at 206 Woodrich Lane (a site off N. University Avenue that includes a large barn and acreage for raising horses), and placed it in his brother's name. He told federal agents that the home was owned by his brother and that he and his wife, Lysandra, had been renting it since 2000, when in reality all of the property and the home was his. (As part of the plea agreement, the government is not charging Lysandra in the tax evasion scheme.)

The plea agreement calls for Johnson to make full restitution imposed by the court - restitution that cannot be discharged if he files bankruptcy.

As part of his plan to conceal income from his private practice, Johnson failed to maintain an operating account, depositing proceeds from his law practice into a client trust account to conceal the nature of the funds. In addition, Johnson knowingly failed to file income tax returns for the years 2004, 2005, 2006, 2007 and 2008.

"Honest taxpayers lose out when someone evades paying taxes that are owed. Our office and the IRS are working diligently to identify those who do not comply with the tax laws and will hold them accountable," U.S. Attorney Stephanie A. Finley said in a press release announcing the guilty plea.

Finley, who prosecuted the case, did not return a phone call seeking comment. 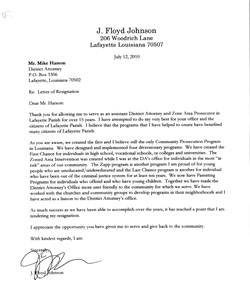 "Today's announcement represents the latest chapter in the longstanding commitment of the Department of Justice, FBI and IRS Criminal Investigation to ensure that those entrusted to serve the public do so without reaping unlawful gain," said James C. Lee, special agent in charge of the IRS' Criminal Investigation division.

This case was investigated by the U. S. Department of Treasury, the IRS' Criminal Investigation division, and the FBI.
The tax evasion matter was not the first time the former prosecutor found himself on the other side of the law.

In mid-2005, the state Attorney General's office charged him in a Bill of Information with domestic abuse battery for allegedly abusing his wife over a three-day period in May 2004. Police were called to a local hospital after Johnson brought his wife in for what he said were severe migraines, though she had swelling in her face and a red eye.

At the time, Johnson, though denying he beat his wife, offered to resign. Harson instead suspended him for two weeks and ordered him to undergo anger management counseling, telling The Daily Advertiser that Johnson would likely keep his job even if convicted of the domestic abuse charge. On the tax evasion charge, which Finley filed in a bill of information made public July 13, Harson initially told the daily paper the matter was "purely personal" and should not affect Johnson's ability as a district prosecutor. But Harson, according to the July 14 edition of The Advocate, apparently quickly changed his mind, telling Johnson he should resign (inexplicably, Johnson's resignation letter, obtained by The Independent Weekly, is dated July 12, a day before the tax evasion charge was made public).

Harson did not return The Independently Weekly's phone calls in February and July seeking comment on the Johnson investigation.

The AG's office handled the domestic abuse case because of Johnson's relationship to Harson's office. Even after he was arrested, Johnson was permitted to prosecute domestic violence cases.

The domestic abuse charge against Johnson was dismissed in April 2006, "due to the victim's request," according to the AG's office.

What's unclear about Johnson's latest legal trouble is just how far-reaching the investigation was  - and whether the case remains open. Did investigators also look into his role as a prosecutor? Johnson was best known in legal circles for handling drug offense cases, having headed the Zoned Area Prosecution program, which was created by the DA's office to target street level drug dealers and neighborhood drug dealing.

Law enforcement sources believe the IRS investigation may have been triggered from complaints about Johnson's record on drug prosecutions, including drug cases he chose not to prosecute and his decisions to reduce charges, according to one law enforcement official who asked not to be identified.