The university's urban forest is under pressure through the school's master plan, being executed in part by the area's foremost New Urbanism firm, Architects Southwest, led by principal architect Steve Oubre. Six mature live oaks face the ax in the next few weeks.

One of the most iconic aspects of UL Lafayette is the canopy of century-old live oaks that shade the campus. Planted in part by the university's first president, Edwin Lewis Stephens, in 1900, the oaks offer haunting beauty that conveys a message of idyllic enlightenment: the university as a garden of knowledge. Fifty years later, a young horticulture professor who would later become dean of the Agriculture school, J.A. Foret Sr., continued the tree planting tradition.

Now, the university's urban forest is under pressure through the school's master plan, being executed in part by the area's foremost New Urbanism firm, Architects Southwest, led by principal architect Steve Oubre. Six mature live oaks face the ax in the next few weeks.

Jim Foret Jr., instructor with the university's renewable resources department and son of the late J.A. Foret, says the mature trees not only have a significant ecological impact on the campus that brings beauty and calm to students, but they are also a large part of the campus' history and legacy. 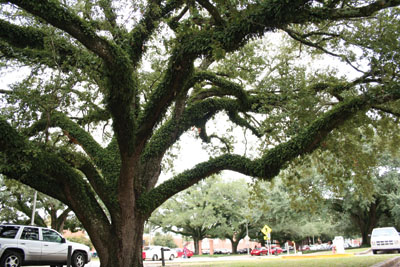 Students and members of several community organizations want to know why they are hearing about the trees' demise only after the plans have been finalized - especially since UL President Joseph Savoie and William Crist, facilities director with the university, say they have been working the plans more than eight months to determine the right course for the trees.

"As students, we feel we weren't involved in the process at all," says junior renewable resources student and Society for Peace, Environment, Action, and Knowledge member Adam Constantin. "Those trees were planted for the university as a community. It's as if they didn't consider that we might have strong opinions about the trees."

Constantin and fellow SPEAK member Felicita "Flitzy" Wilhelm say students have a degree of expectation that they will be informed about an issue this important to the campus.

"We feel like there was a lack of communication between university and students," says Wilhelm. "There are going to be times when these trees have to come out, but we just found out. Maybe there would be no issue if we had known from the beginning."

The issue raises questions from SPEAK as well as from Sarah Schoeffler of Trees Acadiana and Coleen Landry of the Live Oaks Society about whether all options have been exhausted, such as whether the footprint of the new buildings can't be changed to accommodate the extant oaks. Removing the trees is especially baffling since the architectural firm is local and promotes its own environmentalist identity.

"We hate to lose any trees whether it's because of poor health or they have to put a building in their place and there's nothing else they can do," says Schoeffler. "Have they researched the whole situation?"

The trees include two that, according to Crist, are showing signs of disease and would likely have had to be removed anyway. The other four are located at Taft Street near the entry to the Denbo/Bancroft dormitory parking lot, on McKinley Street in front of the credit union, on McKinley and University Avenue (second from corner) and in the rose garden behind Baker-Huger Hall.

The loss of these trees, according to Crist, Savoie and Oubre, is the result of a tremendous amount of discussion and compromise between the space they have to build on and the facilities they need to create. "It's all a balancing act," says Oubre. "The president [Savoie] has been very protective of the oaks, but he's the one who ultimately decides."

"We have a situation where our university only houses 11 percent of its students on campus where most of our peers house at least 20 percent," says Crist. "So we're way under built as far as the amount of housing we have available and, on top of that, are inadequate from a quality stand point."

(He's not exaggerating: UL Lafayette's dorms were ranked eighth on the Princeton Review's list of "Dorms Like Dungeons.")

"We're on a landlocked campus," continues Crist. "We're very tight, and we had to expand our housing. It's a necessity for the students to have those facilities to live in for the campus to survive. That was a critical issue."

Two of the trees are being lost in order preserve another side of the university's history - its architecture. Originally, all the old dorms were going to be torn down. Instead, officials decided to save Randolph, Buchanan, Alumni and Harris halls. In order to do so, the footprint of the building plans had to shift over where the trees are.

"We wanted to save some of the history here because it is important to our legacy. Just like the trees are important to our legacy, the buildings are, too," says Crist.
The McKinley oak is being lost in order to accommodate a new parking garage while maintaining a portion of land for the band to practice on. "If we wanted a parking garage and we wanted a band practice field, then we had to lose the tree," says Savoie.

Another aspect that has students perplexed is the university's decision to uproot these trees despite its involvement with the Tree Campus USA initiative, which is sponsored by the Arbor Day Foundation. Savoie says in order to continue this initiative, he consulted Foret and arborist Frank Thibodeaux with Bob's Tree Service. Together, the two formed guidelines to protect existing trees and to compensate for the removal of the oaks.

"What we're going to do," says Savoie, "is each tree that we lose, we're going to replace it in-kind to trunk size. For example, one of the trees has a trunk diameter of 42 inches, so we're going to replace it with five trees 8 to 9 inches each. Essentially each tree we lose will be replaced with five trees. During the construction phase of this project, there will be equipment that will have to access the site near the remaining trees, so we've also got guidelines on building protective bridges over the root systems of those trees so they won't be damaged."

Savoie further stresses that the toppled trees will be made into artwork or benches.

This is not the first time campus construction threatened the oaks. When the latest parking tower was built in 2008, Doug English, who says he lives near campus because of its natural beauty, stepped in - literally -when he saw contractors getting too close to the half-century-old trees. If the tree replenishment becomes reality, it's a good plan, English says.

His sentiments are echoed by Wilhelm: "I think we'd like to see an actual agreement in writing that it really will happen and that those trees would be protected for X amount of years."

Everyone seems to agree that this is not just an ecological issue, but a cultural one. Crist and Savoie note that many of the oaks on campus were planted with great ceremony by early university leaders Stephens and Foret.

Savoie says additional construction of housing and parking towers will not be on the central campus and will aim to create more green space. "I can't say how much we agonized over this," the university president maintains. "But you have to move forward, and you do it in a way that has the minimal negative impact."