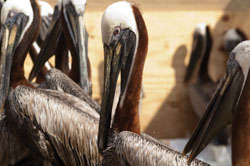 Lawmakers are being asked to consider restoration plans for the Gulf of Mexico. But are they listening? By Jeremy Alford

With a new political year only weeks away, members of Congress and the Louisiana Legislature are being asked by special interest groups and others to continue legislating solutions to the Gulf of Mexico's plight in the wake of the BP oil disaster. Lawmakers are considering bills to make up for lost recreational opportunities, correct damages to wildlife resources and mitigate the environmental impact on the state's marshes.

Lawmakers both in Congress and the Legislature
are being asked by a variety of interests to direct
more resources to Gulf Coast recovery.

Lawmakers are being asked to consider restoration plans for the Gulf of Mexico. But are they listening? By Jeremy Alford

With a new political year only weeks away, members of Congress and the Louisiana Legislature are being asked by special interest groups and others to continue legislating solutions to the Gulf of Mexico's plight in the wake of the BP oil disaster. Lawmakers are considering bills to make up for lost recreational opportunities, correct damages to wildlife resources and mitigate the environmental impact on the state's marshes.

While Congress is already mounting a so-called "lame duck session" - the GOP will soon take over the Democrat-controlled House and President Barack Obama's approval ratings are at an all-time low - the state Legislature is in the beginning phases of preparing for its April 2011 regular session.

On the federal level, the Environmental Defense Fund, a New York-based nonprofit advocacy and research organization, is encouraging Congress to pass legislation that would devote a significant portion of the BP fines to Gulf Coast restoration. In a poll commissioned by the group and released last week, it found that nearly eight out of 10 voters, or 78 percent, from the Gulf region states of Alabama, Florida, Louisiana, Mississippi and Texas say they favor creation of a special fund for the Gulf region and the Mississippi River Delta.

Such a fund would include penalty payments from BP for violating the Clean Water Act and the Oil Pollution Act. Under current law, any penalties paid by BP would be deposited into the federal treasury, even though the money is directly related to the Gulf Coast.

In early August, U.S. Sen. Mary Landrieu, a Democrat from New Orleans, reintroduced her Restoring Ecosystem Sustainability and Protection on the Delta Act, known as the Respond Act, which called for no less than 80 percent of the civil and criminal penalties charged to BP under the Clean Water Act to be returned to the Gulf Coast for "long-term economic and environmental recovery."

It likewise stipulated that the money paid by BP under the Natural Resources Damages Assessment should be used to fully fund the coastal restoration projects authorized by the Water Resource Development Act in 2007. "Gulf Coast states need a dedicated and robust stream of funding to restore and protect our coast for the long-term," Landrieu says.

U.S. Sen. David Vitter, a fellow Metairie Republican, says he likes both bills and would work "closely" with Landrieu, but would more likely move forward with a Senate version of Scalise's proposal because it's "more focused" and does a better job of positioning Louisiana. "We've made the sacrifice for decades to supply our nation's energy needs. We paid the direct environmental price in this BP oil disaster. We should receive the lion's share of the fine revenue," says Vitter. "It's just that simple."

Back on the state level, the Louisiana Wildlife Federation is proposing habitat restoration work and public access projects to administration officials and the Legislature. LWF's habitat recommendations include the restoration of Gulf-side barrier beachfronts like dunes, vegetation and natural tidal inlets, all of which were affected by the escaped oil and subsequent response efforts.

The group also wants to see the restoration and stabilization of small, isolated islands in the Breton Sound as well as the Barataria, Timbalier and Terrebonne basins, which serve as critical nesting and roosting habitats for birds and marine life like dolphins, sea turtles, redfish, speckled trout, blue crabs, shrimp and oysters.

"Restoring our barrier island and headland habitats is vitally important to the health of a variety of wildlife and fish species," says LWF Executive Director Randy Lanctot. "Our recommendation also includes smaller islands, many of which were heavily impacted by the oil. Because they are isolated from predators, these little islands are attractive to colonial nesters like brown pelicans, herons, egrets and other wading birds."

Other projects recommended by LWF to mitigate for lost recreational opportunities include:

new management of public use at Elmer's Island, including support for habitat inventory and supervision by the Louisiana Department of Wildlife and Fisheries to assure safe and respectful use

restoration of public use at Fourchon Beach, which should be placed under the direction of the South Lafourche Beachfront Development District;

rehabilitation of the "fishing pier" known as "the old bridge" on Caminada Pass at Grand Isle; partially destroyed by fire in September 2009, the bridge has served thousands of recreational crabbers and anglers for decades; and

While it's going to take quite a bit of work to get the state back into pre-spill shape, Lanctot argues that a smart legislative agenda will at least put Louisiana back on the right road - and it'll give outdoorsmen and conservationists something to look forward to in the coming months.

"Louisianans and those from outside our state who visit each summer to fish and crab, bird watch, beach comb and enjoy our coast lost out on an entire season of enjoyment," Lanctot says. "And those activities continue to be restricted today because of response to the oil spill."