Not satisfied with being the nation's largest newspaper chain, Gannett's latest ploy calls for evicting its Acadiana competitors. 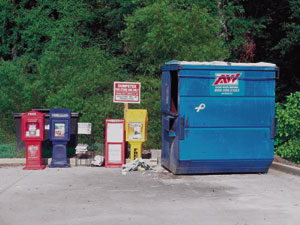 If a new Gannett strategy plays out in Acadiana, local independent publications like The Independent Weekly could be coming soon to a dumpster near you.

South Louisiana Publishing is the Gannett-owned company that oversees the publication of The Daily Advertiser, Daily World, The Times of Acadiana, Quik Quarter and other publications. In a conversation earlier this month with The Independent Weekly Associate Publisher Odie Terry, SLP's Circulation Director Bobby Binkley confirmed that Gannett is planning to launch an exclusive newspaper distribution network, but he couched the idea as a service ' an opportunity, even ' for The Independent Weekly and other local free publications.

Although this new "service" ' which eliminates distribution points of independent publications that don't sign up with Gannett's distribution system ' is new to Lafayette, it's a tactic that's been used in other parts of the country by the McLean, Va.-based corporation. The nation's largest newspaper chain has already created havoc for independent publications in communities like Sioux Falls, S.D.; Greenville, S.C.; and Jackson, Miss.

Gannett's pitch to retailers is that it will take on the retailer's burden of managing the racks of free publications at a store's location by installing one gigantic plastic box. Gannett then offers the retailer a cut of the revenue from the publications that rent the box space.

But for the competing publications, the deal isn't so sweet.

Todd Stauffer, publisher of the Jackson Free Press, discovered the Gannett daily newspaper in Jackson, Miss., The Clarion-Ledger, was entering into agreements with retailers that gave Gannett exclusive rights to distribute any and all free publications. The agreement gives Gannett the right to evict publishers who don't sign up with the service from its distribution points. In May, Stauffer wrote in his newspaper: "I understand the Mafia in New York City has a similar system."

The Jackson Free Press serves 190,000 Jackson residents and a metro area of 500,000 by distributing 16,000 copies of its weekly paper in more than 400 locations. After JFP published its first story on Gannett's new distribution network, The Clarion-Ledger Publisher John Newhouse released a statement that read in part: "The growing number of free publications, not just here, but around the country, presents both opportunity and concern for all of us." He concluded: "A distribution network will happen in Metro Jackson, if not by The Clarion-Ledger, then quite possibly by a distribution company with no connection to Jackson or Mississippi. And, based on national trends, companies from outside this market would likely charge much higher rates for the same service."

The Daily Advertiser Publisher Ted Power is short on details about SLP's distribution intentions, but he parrots the Gannett party line: "If we decide to go ahead, we want to go ahead at a point before anybody else does it."

When Stauffer met with The Clarion-Ledger's Circulation Manager Lee Warmouth, he requested a copy of the contract that retailers were signing with Gannett, but Warmouth refused. Stauffer then obtained a copy of the agreement from another source. "It basically says that the retailer is giving The Clarion Ledger the exclusive right to manage free distribution publications on [retailers'] premises, all the grounds, indoors and out," he says. The deal calls for Gannett to give retailers 23 percent of the boxes' revenue, and assuming that The Clarion-Ledger won't pay for its own publications to be included in the boxes, Stauffer says the retailer's cut is at most $12 a month.

Jackson Free Press didn't take Gannett up on its new service, nor has any other free Jackson area publication. Instead, they formed the Mississippi Independent Publishers Alliance, a group of independent free publications that publish classified papers, real estate guides and weeklies. Each member of the alliance has pledged not to sign up with Gannett's free distribution network. As long as Jackson's independent publishers stick to their guns and refuse to sign onto The Clarion-Ledger's network, it leaves the daily newspaper without income from the boxes ' of which retailers have been offered a percentage ' but it still leaves Gannett with exclusive distribution rights.

"If this was truly free enterprise," Stauffer says, "they wouldn't have to put 'exclusive' [in the contract]. â?¦ They're not truly offering a product, and that's how I know their scheme is more evil empire than it is a service. The problem I've got is that my competitor is going to be setting the rate on the box, and they're basically using the strong arm of a Virginia-based corporation to try to buy their way into something they haven't done particularly successfully just through sweat and tears."

Stauffer received a letter from The Clarion Ledger on May 18 stating that Jackson Free Press must remove its racks from 167 locations by June 19. JFP's attorneys responded by saying Gannett's contracts with retailers were invalid since Gannett misleadingly used Jackson Free Press' name in its marketing materials. "They suggested strongly to the locations in their pitch that most of the local free publications were on board as they went into pitch the idea," Stauffer says. Retailers were presented with a list of publications titled "Accepted" and used the form to pick the publications they wanted in their locations. "It wasn't that we had accepted anything," Stauffer says. "It wasn't that we even knew anything about the program. Prior to having talked to us, they created this list and made it look very legal. We're saying we think that the contracts they signed while using our name are invalid." On June 20, the Jackson Free Press reported that its readers had spotted independent publishers' racks lined up next to dumpsters.

"On top of that," Stauffer says, "we learned yesterday that one of the chains of convenience stores didn't actually sign it until this week, although we got the letter a couple weeks ago. So they're basically just playing both sides of the fence. They're clearly overestimating the locations they're telling us we have to get out of, and then they're going to the retailers and saying this is going to be a great thing, except they're actually not going to have any free distribution papers there."

"I think it's icing on the cake for them if they actually manage to make money off the distribution network," Stauffer adds. South Louisiana Publishing's Binkley told The Independent Weekly's Terry that SLP's business plan doesn't call for making money for the first three years.

In addition to The Independent Weekly, Acadiana publications that could be affected by Gannett's latest ploy include Acadiana Lifestyle, 008 magazine, The Real Estate Book, Zing, The Acadian, HealthCare Highlights, House & Home and Louisiana Homes & Gardens.

Gannett's new distribution plan is a reaction to declining readership at Gannett's daily newspapers. The Clarion-Ledger has launched a car classified shopper, a home classified shopper, a parenting magazine, and a weekend section, for a total of half a dozen free publications. In Lafayette, Gannett's trying the same strategy with Acadiana Parent and L Magazine.

"It's about free enterprise," he adds, "and it's about a marketplace of ideas. Gannett has a pretty bad track record of trying to own that entire marketplace. They shouldn't feel threatened by the free publications. But the truth is they are because they don't do a great job ' at least in our market ' of being the paper of record. I wish they would take their vast resources and focus more on reporting, investigating, and telling us the stories we need to hear, as opposed to trying to knock the Thrifty Nickel out of business."