Dickie Breaux's attempt to buy Borden's ice cream store on Johnston Street is getting a chilly reception from UL. 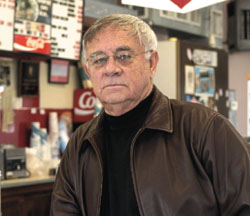 When Dickie and Cynthia Breaux opened Café des Amis in 1991 on Bridge Street in downtown Breaux Bridge, it sparked renewed interest in an area languishing after a massive downturn in the oil industry and an influx of large retail chains. The Breauxs led an effort to get the district's turn-of the-century buildings placed on the National Register of Historic Places in 1995. That qualified most of the buildings for restoration tax credits and led to a new wave of shops and art studios in the area.

"When you can attract artists into the community in lieu of the barroom scene you have done so much," Dickie Breaux says. "Anywhere you go I feel the Achilles heel of the creative community is a lack of reverence for historical property."

With Breaux's track record in historic preservation, his recent bid to buy and operate Borden's Ice Cream store on Johnston Street ("Sweet Offer," Feb. 9) looked rich with promise. The shop has been a local landmark since it first opened in 1940 and is the last remaining Borden's retail store in the United States. Breaux wants to keep it that way. But the entrepreneur now says he's reached a stalemate with representatives of the UL Lafayette Foundation in negotiations to buy the property.

"They just don't get it as far as I can tell," Breaux says. Breaux has already reached an agreement with Borden's officials to maintain operating the store under the company name, but the property is owned by UL. Breaux says his offer of $9.50 per square foot for the 17,000 square foot lot was countered by the UL Foundation Board with a request for $14 per square foot. "I think the counter offer was not fair," Breaux says. He responded with a request to lease the property for 25 years, but hasn't heard back from UL in the past month. "My only interest is to keep Borden's open, and I'm wide open to almost any situation if they want to do a profit sharing deal or something else," says Breaux. "I don't mind coming up with the capital to restore the building."

If he does acquire the property, Breaux says he is prepared to spend an additional $120,000 fixing antiquated electrical wiring, replacing Borden's air conditioning unit and adding another building for storage so he can expand capacity.

UL President Ray Authement says the decision lies in the hands of the UL Foundation board, on which he serves with 30 other members. He says the committee has referred the matter to its building committee to negotiate. "That's sort of a unique property," Authement says. Though he refuses to discuss the specifics of any offer, Authement says, "We're looking at the best possible deal for the foundation. The money in time accrues for the betterment of the university."

According to Lafayette Parish Tax Assessor Conrad Comeaux, the last property to be sold in the area was a lot at 1715 Johnston St. near Rex Street, which went for $6.23 a square foot. Breaux says he checked with Comeaux's office to gauge fair market value before making his initial offer. "Borden's has done everything they can to assist to me," Breaux says. "I wish the cooperation was the same from the university. I'm not interested in becoming a real estate baron in downtown Lafayette. I'm just trying to keep Borden's open."

The University foundation inherited the Borden's property from Flora Levy, who passed away in 1981. Dr. Maurice duQuesnay, the executor of her will (and a UL English professor), says Levy did not put any stipulations on the donation, but notes, "Her hope was that the property would be a sustaining and permanent investment for her endowment."

UL Foundation board chairman Rusty Cloutier maintains the board will negotiate in the best interest of the foundation, but also declined to comment on specifics of any offers and counter offers. "The foundation takes this piece of property very, very seriously," he says. "We are very aware of the value of the area." Both Authement and Cloutier also say they are sensitive to the community's desire to keeping Borden's open. "The question is: is it best to sell at a certain price yet to be determined or to continue to lease?" Authement asks.

Cathy Webre, director of the Downtown Development Authority, says she hopes the two parties can reach an agreement. "If you went in and actually tried to restore the building and had an entrepreneur like Dickie really promote the business, I think it could be very influential," she says.

Breaux is frustrated over the lack of movement in the negotiations. "I see that area as the creation of a whole arts community, and I think Borden's would be a wonderful continuous thing to something already started there," he says. However, Breaux fears that the only way UL will get top dollar for the property is for it to sell off Borden's completely. "The issue is simple in my mind," he says. "Do they want to see Borden's continue and have a really unique restoration and the only Borden's retail store still in existence for this area, or do they want another Taco Bell?"