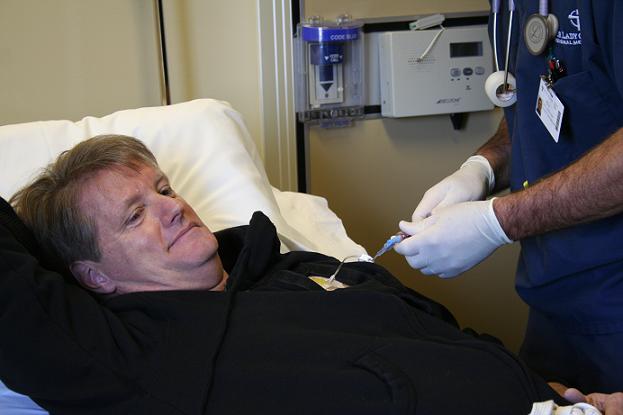 The purpose, says Hoon, isn't about him, but about trying to connect with other people. "I have a couple of reasons: the first is to find someone on the same track or path that I am," he says, "[and] the second is to be a resource for those just starting out who don't know what it's like."

Hoon was diagnosed three years ago with colon cancer that had already spread to his liver and lungs. In that first year, he started researching chemotherapy records and trying to find people who had been on long-term chemotherapy tracks. For the most part, he came up empty. "I can go to M.D. Anderson and talk to a dozen cancer patients, but when I'm home it's hard to connect," says Hoon.

The treatments are daunting. Starting with an infusion at the hospital, Hoon's treatment will continue for about a week during which he will be somewhat incoherent. Then he has a week to himself before taking another treatment. This alone has become a full-time job for the former engineer. His new part-time job, he says, has been coordinating the extensive paperwork for Guinness. Because of the time his treatments take, he anticipates sending in the packet in about two weeks, and Guinness should reply within four weeks. In the meantime, Hoon is working on other ways to connect with cancer patients and survivors. He and friend William Bailey have pulled together a website, www.wearecancer.com, that will serve as a Facebook for cancer patients and give them a way to connect and share stories and testimonials.

Hoon says he has survived up to this point by believing 100 percent in his recovery and by trying different methods such as vitamin therapy, which he says cleared the cancer from his colon, though the other organs are still cancerous. "There are a lot of testimonials out there. I find it hard to believe them when they're just words on a page," says Hoon. "I want to be something people can see and look at."

The website isn't fully functional just yet, but Hoon anticipates having blogs up in the coming weeks.

For now, Hoon is in one big waiting game - waiting on the scans to change and waiting on Guinness.