With pressure from Cox Communications, Lafayette's business community is reconsidering its support of FiberFete, and forcing the annual broadband summit to re-examine its identity.  By Nathan Stubbs

At the start of the year, FiberFête - an international broadband summit touting Lafayette's emerging role as one of the most wired communities in the country - was still up on the drawing board. It wasn't until February that organizers got the inaugural event's financial commitments and budget finalized. But two months later, FiberFête was pulled together in impressive fashion. Despite the Iceland volcano preventing a half dozen international speakers from attending, the event still brought in more than 30 presenting speakers, some from the likes of Google, Cisco Systems, Harvard University, American Public Media and the city of Amsterdam, Holland. Guests represented several different nationalities and industries, but all shared a common interest in fiber-to-the-premise broadband networks, and the technological possibilities they present. 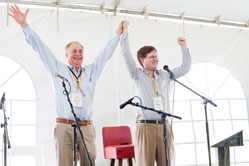 With pressure from Cox Communications, Lafayette's business community is reconsidering its support of FiberFete, and forcing the annual broadband summit to re-examine its identity.  By Nathan Stubbs

At the start of the year, FiberFête - an international broadband summit touting Lafayette's emerging role as one of the most wired communities in the country - was still up on the drawing board. It wasn't until February that organizers got the inaugural event's financial commitments and budget finalized. But two months later, FiberFête was pulled together in impressive fashion. Despite the Iceland volcano preventing a half dozen international speakers from attending, the event still brought in more than 30 presenting speakers, some from the likes of Google, Cisco Systems, Harvard University, American Public Media and the city of Amsterdam, Holland. Guests represented several different nationalities and industries, but all shared a common interest in fiber-to-the-premise broadband networks, and the technological possibilities they present.

Unique in many ways, FiberFête billed itself as "an invitation-only conference to bring local leaders together with a wide variety of national and international Internet experts to discuss how communities like Lafayette can realize the greatest return on investment in their networks and explore how to drive economic development and enhance their community's quality of life." It also was a coming out party of sorts for LUS Fiber, Lafayette's own recently launched fiber-to-the-home telecommunications network and business. "I honestly thought it was a huge success," says John St. Julien, who sat on a community advisory committee for the event. "I got such a uniform read from everybody from sort of big business guys to funky guys who are advocating community empowerment like me, that I was surprised. I don't necessarily think that we all thought it was good for the same reason, but I thought it was a big success legitimately."

For event organizers and owners Geoff Daily and David Isenberg, the event proved what could be pulled off, even on short notice, with a united community front. The inaugural FiberFête got fundraising assistance from business leaders Clay Allen, Bill Fenstermaker and Matt Stuller; it ended up boasting 26 sponsors that read like a who's who of area businesses: IberiaBank, Stone Energy, Whitney Bank, C.H. Fenstermaker & Associates, Stuller Inc., Fugro Chance, Lafayette General Medical Center, Acadian Companies and several others. The Greater Lafayette Chamber of Commerce, the Lafayette Economic Development Authority, LUS Fiber, Lafayette Consolidated Government and Lafayette Convention and Visitors Commission also signed on as sponsors. While Isenberg declined to comment on how much FiberFête cost to produce, sources close to the event say it was approximately $100,000, with sponsors ponying up as much as $5,000 each.

That coalition of the willing is now having second thoughts. As planning has gotten under way for FiberFête 2011, organizers have been getting a much more tepid response from the business community, raising questions about whether the event will continue annually as intended. Daily says FiberFête will now likely be pushed back to November in order to allow more time to adequately plan and present the latest local technology advancements for the event. "There's no guarantees," he says. "It's our intent to have the event this year, next year and for the foreseeable future. Whether or not we're able to actually do that will come down to what kind of buy-in we can get from the community and others."

Though it's only been seven months since the inaugural event, several factors have combined to dramatically alter the landscape for FiberFête. Much of the change involves the growth of LUS Fiber. Now offering its phone, cable and Internet service across the city, the competitive tension between LUS and chief rival Cox Communications is peaking. Meanwhile, enthusiasm for LUS has waned in the prolonged rollout since a 2005 election victory green-lighted the initiative. And because FiberFête is viewed by some as a thinly veiled rally for fiber to the home, it's created a delicate situation for community organizations like the chamber of commerce, which do their best to cater to both Cox and LUS. (LUS Fiber, while a sponsor of the first FiberFête, is not involved in any way with the planning of the event.)

Chamber President and CEO Rob Guidry did not return a phone call seeking comment for this story.

This year, Cox public affairs rep Julie Dronet earned a seat on the chamber's board of directors (LUS Director Terry Huval is also on the chamber board). Dronet says she has had conversations with members of the chamber and others about Cox becoming involved with Fiber Corps, a nonprofit headed by Daily and funded entirely by community organizations including the chamber and LEDA, but she has not had those conversations about it being involved with FiberFête. "That was by invitation only," Dronet says of FiberFête. "We would have been interested in participating, but we weren't invited to participate." Fiber Corps' mission is to promote Lafayette as a tech innovator and hub. For Dronet, it's an obvious partner for Cox, which has proudly touted its own broadband upgrades and investments in Lafayette. "You know Fiber Corps is being funded by a number of different community partners, and Cox is already partnering with many of those entities, like the university, like the chamber, like LEDA, so it's a natural [partnership]," Dronet says.
Daily says that Cox is absolutely welcome to participate with Fiber Corps initiatives and that he intends to meet soon with Dronet to discuss the possibilities. "There's no denying the fact that I moved to town because of the fiber," says Daily, who recently relocated his family to Lafayette from Washington, D.C. "That's who I am. There's just no way around it. But at the same time that doesn't mean we're doing things exclusively for [LUS] Fiber because that's not what the community needs right now."

The situation is somewhat different when it comes to FiberFête, a more private affair geared toward broadband purists. "People away from here view us as sort of leaders in this effort to provide an alternative to the standard [telecom] duopoly," notes St. Julien, a retired university professor and tech enthusiast who runs the blog lafayetteprofiber.com. "That's what conferences like this do - they pull together a community, and it would be hugely to Lafayette's benefit in the long run to continue to be the sort of psychic hub of that community."

In trying to once again reel in a broad coalition of business and community sponsors, FiberFête organizers have wrestled with the suggestion that they should now open up the festival to involve all of Lafayette's telecom providers - an idea vehemently rejected by some FiberFête supporters. "It's crazy," St. Julien says. "It's foolish to think that there would be a FiberFête without LUS Fiber." He adds that the festival would not be near as attractive to a global audience if it were giving equal time to private local telecom providers like Cox Communications, because "Cox is doing [here] exactly what they're doing in every other community.

"This was not a sort of community feel good let's boost technology event,'" he continues. "This was an international, advanced fiber-to-the-home conference held in a place that actually had done it. It's called FiberFête for a reason. It's about fiber to the home. This is not about standard issue technology and smiling and patting each other on the back about the community."

St. Julien also stresses that Cox working through the chamber and other community organizations fits its demonstrated modus operandi for keeping competitors in check. LUS Fiber has argued that Cox Communications, through its position on the board of the National Cable Television Cooperative, has effectively blocked the municipal telecom from joining the NCTC and reaping the resulting membership savings in its programming costs. "Cox knows how to play the game," St. Julien says. "They know how to get membership on boards like that and how to use it once they get it. On the national level and the local level, the company has that culture, they understand it. I'm not surprised.

"And when it all came down to it," he continues, "I don't think Cox could believe that the chamber could actually get itself together to support something that wasn't a tax deduction. I think that Cox didn't believe that the chamber could effectively act, and when they finally did, it made a difference. And they resolved that would never happen again."

Daily and Isenberg aren't publicly speculating on anyone's motives, or on what sponsorship changes may be in store for FiberFête. Daily says that he views the event mainly as a showcase for any broadband-related innovations occurring in Lafayette. He notes that because of his involvement with Fiber Corps, he plans to relinquish his financial interest in the next FiberFête, though he will still help plan the event. He and Isenberg also have an agreement that come 2012, Fiber Corps will take over any future productions of FiberFête.