A questionable retraction from the capital city's daily newspaper does damage control for BellSouth. 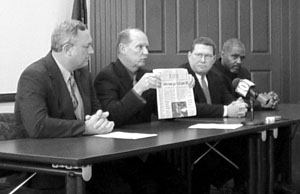 Respected reporter Kevin Blanchard of Baton Rouge daily newspaper The Advocate has been covering LUS' fiber-to-the-home proposal since its inception, along with its subsequent twists and turns. But he never expected the firestorm of backpedaling and accusations that came in the wake of his Feb. 25 story on BellSouth Louisiana President Bill Oliver's meeting with The Advocate's editorial board. Blanchard's article, "Jobs may go if LUS plan OK'd," and its accompanying subhead, "La. BellSouth boss threatens to pull center that employs 1,300 in Lafayette," got city officials so fired up that they immediately called a press conference in the Lafayette Economic Development Authority's offices to respond to what they called BellSouth's "economic blackmail against the people of Lafayette."

But by the time the 3 p.m. Feb. 25 news conference rolled around, BellSouth Louisiana President Bill Oliver had issued a denial of sorts, saying he did not threaten a pullout or closure of Lafayette's Cingular Wireless call center during a "two-hour, in-depth, open discussion" with the paper's editorial board the previous day. Oliver has been one of the most outspoken critics of LUS' fiber-to-the-home proposal, and BellSouth filed suit to force local government to use an ordinance that allows for a public vote on the bond issue to fund the project. His company owns 40 percent of Cingular, which got $18 million in state and local concessions to set up a call center in north Lafayette in 2001.

Oliver's letter, which had been faxed to LEDA exec Gregg Gothreaux just after 2 p.m., also put Blanchard, a seasoned reporter, in the position of defending his story to a group of LUS supporters and fellow reporters.

"I don't write s--t that people don't tell me," an agitated Blanchard answered those seated around him at the press conference. "I don't make [this] up."

But the influential Oliver had already gotten a much warmer reception to his position from Advocate Executive Editor Linda Lightfoot, who agreed to run a correction of the headline in the paper.

Lightfoot says the story accurately reflected what Oliver said during the discussion, though she seemed obliged to comment that "lots of what was said" was not in the story. "That's the nature of the beast," acknowledges the news veteran, who has spent four decades at the capital city paper, rising to executive editor in 1991. (Lightfoot was in New York last week as a judge for the esteemed Pulitzer awards for journalism.)

The correction stated: "The Advocate â?¦ contained an article with a headline that stated BellSouth's President of Louisiana Operations Bill Oliver threatened to pull the company's operations out of the city of Lafayette if [LUS] were to offer competing telecommunications service for that city. While Oliver discussed the possible effects of such a program on his company, he did not make any threats or refer to closure of any operations."

So how do you stand by a story but not a headline that fits it? UL Lafayette journalism professor Dr. Robert Buckman says correcting the headline but standing by the story creates a "peculiar" situation. "The words certainly imply some reprisal if the LUS plan is adopted," he says. "It appears to be a thinly veiled threat."

The most compelling support for the headline on the story is Oliver's reference to Timbuktu, a city in the West African nation of Mali. According to the original Advocate story and a followup on Feb. 26, Oliver said in an LUS-dominated market, BellSouth would have less incentive to keep a call center in an area where it has diminished business interests, considering those same services could be performed by people in Timbuktu. "Would you still keep people there?" he asked The Advocate staffers.

It's not the first time Oliver has raised that question. Former Greater Lafayette Chamber of Commerce Chairman Gary McGoffin says Oliver made similar statements to him last year. According to McGoffin, Oliver said it would be difficult to justify maintaining the center in Lafayette and cited its possible demise as a collateral consequence of the LUS project. (The chamber has not endorsed or denounced LUS' fiber-to-the-home project.)

City-Parish President Joey Durel also says that Oliver has used the same line of reasoning in conversations with city-parish council members. In his Feb. 25 press conference, Durel fumed at Oliver's insinuations. "I believe he said the center could be anywhere. I believe he says Lafayette is insignificant," Durel said.

Carl Redman, the Advocate's managing editor, also attended the editorial board meeting with Oliver and another BellSouth official. Redman told The Independent Weekly he doesn't recall the reference to Timbuktu, and Lightfoot says she can't remember the context. "I do not remember because I did not take notes," she says. Lightfoot maintains that in a subsequent conversation she had with Redman, he did recall hearing Oliver say "Timbuktu" but not the context in which it was used.

Both of the editors use the same adjective ' "copious" ' to describe Blanchard's notes from the lengthy interview. Blanchard did not write the headline; as is customary in newspaper publishing, the paper's copy desk applied what it thought was a suitable title for the story.

For his part, Oliver says he mentioned Timbuktu in attempting to explain that such centers are not geographically specific ' that the service they perform can be done from anywhere. "It's a fictional place that in my mind is not anywhere," he says. In his letter, the BellSouth official says he was explaining BellSouth and Cingular's employee structure, the way they provide service in the state, and the companies' investment in Louisiana to educate The Advocate about the issue of government competing against private enterprise.

In his position as the top BellSouth official in the state, Oliver is a well-connected political and economic powerhouse, as BellSouth and Cingular employ 6,100 people throughout Louisiana. The decision to run a correction had nothing to do with the influence of a large corporate entity like BellSouth, say Lightfoot and Redman.

Oliver acknowledges that he would play an important role in determining a call center's fate. "I have had the opportunity to go out and get call centers to be located here," he says. But he's not authoritative enough to answer city officials' challenge to prove he didn't make threats by promising to keep the center open. (The call center is bound to operate here by a 10-year contractual agreement that expires in 2011.) "It's not something one person would do by themselves. It's a very detailed, involved process, opening one, closing one down, re-locating one. People's lives are involved," Oliver says.

Blanchard's initial story and the resulting controversy were hot news on KLFY-TV10's afternoon broadcasts on Feb. 25. At the end of the televised segment, anchor Chuck Huebner reported that the station had contacted Lightfoot, who said the word "threatens" should not have been used, but Huebner did not state that the paper stood by the story.

Redman declined to supply a more fitting headline for the article. "I'm not going to speculate on what might have been a more appropriate subhead," he says.

Kevin Blanchard declined to comment, but many of his colleagues say that Blanchard's integrity is indisputable, and The Advocate's headline correction unfairly cast doubts on his reporting.

"Kevin's [ability] to get to the heart of a matter is uncanny," says former Advocate Acadiana Bureau Chief Bruce Schultz, Blanchard's one-time boss. "He's a good reporter, and he should be supported in his quest for learning and writing the truth. In the five years he worked with me at the bureau, his credibility was impeccable."