The Old Guard hit the back door last week as the session's final days offered reminders why term limits were approved in the first place. 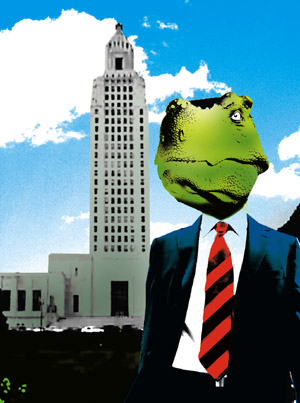 On Monday, June 25, Sen. Tom Schedler did a double-take. A bill had just passed the Senate with a hastily-crafted amendment attached to it that he knew nothing about. In fact, most of the lawmakers who voted on the legislation had never even viewed the amendment. It foreshadowed what to expect over the next 72 hours.

"The final few days of session always scare me," Schedler, a Mandeville Republican, ranted to his colleagues from the Senate floor. "We all know it's like a basketball game. It happens very rapidly. We leave here at four or five o'clock [a.m.] every day. We should never be put in this position."

The last week of a lawmaking session in Louisiana is legendary. The pace is so frantic, the compromise process so secretive and legislators so self-involved that bad bills with questionable intent easily slip by unnoticed. Targets of certain legislation don't even find out they're in the crosshairs until months later. During the first few weeks of session, lawmakers work four days a week, getting home most nights in time for dinner. But during the last week, it's a 24-7 gig.

As such, paranoia had clearly taken hold earlier in the day when one of the Capitol's old political ghosts worked his voodoo on the House and Governmental Affairs Committee. Republican Sen. Max Malone of Shreveport was pushing legislation to make absolutely certain Louisiana's governor is prohibited from issuing pardons on federal convictions. It was largely a local beef, at least on the surface.

Malone was still miffed that a pardon by former Gov. Mike Foster allowed Joe Shyne, who was pinched in 1994 on federal racketeering charges, to run for the Shreveport City Council. But as committee members took their vote, Malone issued a strange warning: "You are voting to pardon Edwin Edwards, that's what you are doing!"

Rep. Charmaine Marchand, a Crescent City Democrat, helped kill the measure and rejuvenated rumors of Gov. Kathleen Blanco's options on the matter. "I want Edwards back," Marchand said, casting a vote that surely brought smiles to the Federal Correctional Institution in Oakdale.

As the smoke cleared the following day, and legislation was released from opposing chambers or conference committees after weeks of rancor, several lawmakers found their bills sporting hitchhikers, as they're commonly called. One of the largest came at the hands of Rep. Roy Quezaire, a Donaldsonville Democrat, who single-handedly attached $734.9 million in road repairs and related upgrades to an unsuspecting Senate bill. The gigantic rider was eventually stripped off when Blanco caught wind of the amendment and threatened a veto.

Other bills came out of the process much worse off and even unrecognizable in some instances. "The only thing left of mine is my name," said Lake Charles Democratic Rep. Elcie Guillory in disgust over the loss of his own bill to last-minute hijinks.

As Democratic Gov. Blanco faced the final two days of her last session, she remained at odds with Republicans over how much tax relief should be included in the state's record $30 billion budget. The governor was willing to accept $180 million in tax relief, but the GOP wanted considerably more.

On the House floor, Republicans hung signs on their desk computers declaring, "My Mama Wants Tax Credits." It was in reference to a quip by Rep. Jim Tucker, a Terrytown resident who chairs the House GOP Caucus, responding to Blanco's threat to cut pet projects in exchange for tax relief. "She's not my mama, and she's not my constituent," he said.

Not to be outdone, Democrats, who mostly argued that too many tax cuts would jeopardize important programs and construction, posted their own signs reading, "My Mama Wants Roads."

Hitchhiking attempts continued throughout the day, but the efforts were overshadowed by a true hijacking. Dredging up a hot topic from last year's session, senators from southeast Louisiana tried unsuccessfully to take over an unrelated House bill to create a new autonomous West Bank levee district.

While not the most ethical route to take in passing legislation, term-limited Democratic Rep. Francis Thompson of Delhi defended the practice in his farewell address. "You should never let the constitution stand in the way of a good bill," he said.

The final day of session started 30 minutes late, with the House getting underway long before the Senate, but nowhere close to the 9 a.m. convening time. After one lawmaker switched his vote on a bill from the previous day ' an all too common practice that allows minds and once-official stances to be changed ' the House endorsed a resolution to create an Italian-American Caucus, effective immediately. (Where there's a cause, there's a caucus, conventional wisdom goes, and the House already has conclaves for women, rural lawmakers, and more.)

As the business of the day proceeded, stuffed monkeys were discovered in various locations around the House floor, the aftermath of a debate from the previous day that ended in the Tulane Primate Research Center's budget being halved. Rep. John Alario, the Westwego Democrat who chairs the budget-drafting Appropriations Committee, had jokingly said half of the monkeys would need to escape, and they apparently did.

The real animalistic behavior, however, didn't surface until Rep. Rick Farrar, a Pineville Democrat, argued on behalf of a last-minute amendment that would have loosened regulations for certain nursing homes. Freshman Rep. Elbert L. Guillory of Opelousas, also a Democrat, questioned Farrar about how he cares for the older members of his own family and then accused him of not being sympathetic to seniors. "Do you have no shame?" Guillory asked.

Farrar gripped the podium and pointed a finger angrily at Guillory, saying, "You better watch out, because I do have shame. And I'll tell you what else I have ' pride. So you better watch what you say."

Rep. Warren Triche, a Raceland Democrat facing term limits, stoked the fire by asking the House speaker: "Do we have boxing gloves in the House we can administer to these two to let them go at it here?" The speaker denied the request, but Triche had tried one more time, on behalf of the Class of 1988, to keep the House as rowdy as it's always been.

Alongside the drama of the forced exits, the pace of those final hours and the sex appeal of a record surplus, it was the last gathering for 45 representatives signing off alongside 15 senators. Maybe that's why Triche apologized to the House on behalf of his freshman class during his farewell speech for shortening terms.

It proved, finally, that lawmakers are accountable for their actions ' kind of. "We as a class voted overwhelming for term limits, and it would be especially difficult for us to come here now and tell you we have a change of heart and really want to change our vote," Triche said. "But we're the reason you're facing this."