In strong favor with Democrats and Republicans, a political star is rising.  By Jeremy Alford

During the third week of January 2004, newly elected Gov. Kathleen Blanco held a highly anticipated press conference where she was supposed to name six of her top cabinet appointments. However, she only had five names to offer reporters; noticeably absent was her pick for Department of Natural Resources secretary.

Part of her transition team was pushing for Robert Baumann, then the research and development director of the LSU Center for Energy Studies. Another faction, including Blanco, a Democrat, wanted St. Martin Parish President Scott Angelle, formerly a landman in Lafayette and a vice president of Huval Companies. 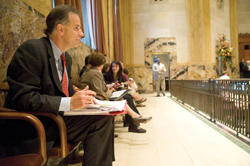 Scott Angelle at the state Capitol

In strong favor with Democrats and Republicans, a political star is rising.  By Jeremy Alford
Photo by Robin May

During the third week of January 2004, newly elected Gov. Kathleen Blanco held a highly anticipated press conference where she was supposed to name six of her top cabinet appointments. However, she only had five names to offer reporters; noticeably absent was her pick for Department of Natural Resources secretary.

Part of her transition team was pushing for Robert Baumann, then the research and development director of the LSU Center for Energy Studies. Another faction, including Blanco, a Democrat, wanted St. Martin Parish President Scott Angelle, formerly a landman in Lafayette and a vice president of Huval Companies.

She probably didn't realize it at the time, but Blanco's eventual choice would become a legacy that outlasted her own time in office. Angelle got the job, and he was among the few who stayed on when Gov. Bobby Jindal, a Republican, succeeded Blanco four years later.

That was just the first sign that Angelle was a guy who could roll with the punches. He was proud of his Democratic credentials under Blanco, yet he unapologetically switched to the GOP under Jindal. One thing didn't change, however: Angelle's legendary work ethic.

When Jindal tapped Angelle to be his legislative liaison in November 2008 (after his first regular legislative session) - a task Angelle performed while still holding down his job at DNR and without additional compensation - the savvy Cajun quipped, "I'll sleep less and work more." It wasn't an exaggeration. Angelle continues to commute to Baton Rouge from his home in Breaux Bridge; the hours on the road and on the job can often be seen in his unshaven face and heard in his scraggly voice.

Beneath his workaholic veneer, Angelle evokes the hallmarks of another political generation. He likes to tell jokes in his thick Cajun accent, once cut a deal with a lawmaker on the back of a cocktail napkin, has boiled crawfish in D.C. for federal officials and doesn't take himself - or politics - too seriously.

It's a family tradition. Earlier this year, Angelle was named the Louisiana Wildlife Federation's "Professional Conservationist of the Year." He was presented the award for "his efforts to create a new focus and new framework for the work of preserving one of Louisiana's signature features - the Atchafalaya Basin." Angelle's father, J. Burton Angelle, received the same honor in 1973 when he was serving as secretary of the Louisiana Department of Wildlife and Fisheries under then-Gov. Edwin Edwards. "In a lot of ways I'm following in his footsteps," Angelle says. "I'm putting public service first." (He has five children; his father had nine.)

By all accounts, Angelle is poised to eclipse his father politically. Already, he can call himself a former lieutenant governor, thanks to his relationship with Jindal and former Lt. Gov. Mitch Landrieu's mid-term election as mayor of New Orleans. When Jindal tapped Angelle for the interim appointment, he found himself on a statewide stage.

"I mostly learned that an appointed lieutenant governor has very little authority," Angelle says. "That's just the reality of it. I wouldn't even call it tremendous. But I jumped in with both feet and brought energy and enthusiasm to the job and my love for Louisiana. But it was fortunate for the state, I think, to have someone in the job with an oil and gas background during the time of the BP incident. I believe the stars were aligned in that sense."

That's probably why, shortly before Thanksgiving, Jindal announced that Angelle would remain the state's point person on federal oil and gas permitting issues. "During his tenure, Scott demonstrated tremendous leadership by working diligently to secure funding from BP for seafood promotion and for our tourism industry, which have suffered in the wake of the Deepwater Horizon oil spill," Jindal said. "In short, Scott has been a bulldog in fighting for the people of Louisiana."

After voters elected Jay Dardenne lieutenant governor on Nov. 2 - but before Angelle returned to his DNR post - Angelle made a mad dash for political cash. Supporters organized a fundraiser hosted by state Rep. Fred Mills, a Democrat from Parks, and Sen. Mike Michot, a Lafayette Republican. The two are among Angelle's closest political allies. Like most statewide elected officials, Angelle raised money by leaning on the stakeholders he regulates at DNR. The "ask" was legal under current campaign finance laws because, technically, the event was held a few days before Angelle returned to his DNR post.

While no one involved in the fundraising has released an official tally, Angelle says his supporters collected "way above what they expected." He's also mum when asked what office he's eyeing next year. Will it be a seat in the Legislature? Will it be statewide office? "My friends have more ambition for me than I have for myself," he says.

Angelle further argues that having the lieutenant governor's job, even on an interim basis, did little to encourage his expected return to elected politics. "Having the job didn't pull me along any further in that decision-making process. Like I said, I feel like other people have had more ambition for me than me," he says. "This has all come from the bottom up, not the top down."

In fact, if Angelle had his druthers, there would be no lieutenant governor at all - an idea Jindal floated (unsuccessfully) during this year's legislative session. "I think the office should be eliminated," Angelle says. "The position itself can be combined with another statewide job, and other states have done just that. We just need to make sure that the tourism aspect is placed somewhere where it will be treated like a priority. Anything that can save us money is a good thing right now. We're about to enter an era where not protecting traditional turfs are what leaders will have to be about. We can't follow the historical models anymore."

And what of his own politics? As DNR secretary and Jindal's lobbyist, Angelle says he will steer clear of party squabbles, so don't expect to see his face at GOP gatherings. But do expect to hear more conservative touchstones. When he was considering the switch to the Republican Party, he compared his thought process to that of other former Democrats like President Ronald Reagan, Gov. Mike Foster and Congressman Billy Tauzin.

While Angelle doesn't appear to take his politics too seriously on the surface, he approaches his profession systematically. "I think politics is largely a result of timing and experience," says Angelle, 49. "The more experience you have, the more prestige you have. As for timing, the fact that we had a term-limited Legislature in 2008 [meant that] I went from being one of the youngest people involved in the process to being one of the more senior members in state government. The timing of all that boded well for me."

His pragmatic side emerges again - along with his Cajun wit - when he's asked why he decided to raise money right before returning to his appointed DNR post. Invoking Calvin Borel, the Derby-winning jockey from Louisiana's Cajun heartland, he says, "It's just plain important with today's modern campaigns. Just like Calvin Borel says, I need to try and stick with the pack. That way, in the future, if I can offer myself for higher service, I'll be ready. I want to be able to hit the rail like Calvin and set the pace."

Jeremy Alford is a freelance journalist based in Baton Rouge. You can reach him through his Web site at www.jeremyalford.com.