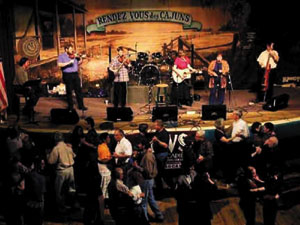 For the past 20 years, it hasn't been hard to find Barry Ancelet on a Saturday night. Nearly every Saturday, save for the rare dates when he made trips to Nova Scotia or to conferences, Ancelet has helmed the Rendez-vous des Cajuns at Eunice's Liberty Theater. Perched on his stool in the left corner of the stage, the noted folklorist and preservationist of Cajun and Creole culture tells jokes and makes small talk with the bands performing at the program, which marks its 1,000th show this week.

"What is truly remarkable about this run is my wife's patience," says Ancelet. "She has given up virtually every Saturday night for almost 20 years. Now that's dedication." In 1986, he helped organize a few cultural events at the Liberty ' an old time radio show and programs exploring the traditions of weddings and Mardi Gras. In July 1987, it became a weekly program named Rendez-vous and settled into a mission of developing tourism through family-oriented Cajun and Creole music and cultural information. Ancelet also aims to cultivate a younger generation of musicians to carry on the traditions of south Louisiana music performed by older, established bands. On a deeper cultural level, the program's use of Cajun French is a strong play for its survival and continued usage.

"This [use of French] produced a certain amount of tension in the early going," says Ancelet. "In the end, the issue resolved itself as outsiders and locals alike were overwhelmingly positive in their comments concerning the show's authenticity."

From his spot on the stage, Ancelet watched unforgettable performances, most captured on video. His favorites are a list of classics that could easily fill Volume One of a best-of DVD ' a possibility as the tapes are now being digitized at the Archives of Cajun & Creole Folklore, an effort started by Ancelet. The Liberty stage served as the setting for a wide scope of events in modern Cajun and Creole music: the unlikely pairing of staunchly traditional Dewey Balfa and modern experimenter Wayne Toups; a young Horace Trahan coming out of the crowd to bring the audience to tears with his accordion-only version of Iry Lejeune's "Viens me Chercher;" Jo-El Sonnier shedding tears of his own after receiving a tremendous ovation; Robert Jardell's version of "Johnny Can't Dance," played the old way after Toups made his contemporary version a hit; and the a cappella talents of ballad singers Inez Catalon and Lula Landry.

For the milestone 1,000th performance, Ancelet dug into the program's past. Robert Frey, who played the first Rendez-vous, returns, as does Jeffery Broussard, who performed with his father Delton's Lawtell Playboys at the second event. Jambalaya, which has performed at the most Rendez-vous programs, accompanies D. L. Menard, Paul Daigle and Rodney LeJeune. The night will serve as a perfect bookend for the first 1,000 shows and a great launching pad toward 2,000.