Local rocker and snakeskin connoisseur makes an appearance in this month's Spin Magazine.

Love him or hate him he sometimes has that effect on people producer, musician and snakeskin connoisseur CC Adcock is back in the news. This time the Lafayette roots rocker, who along with Jace Everett is up for a 2010 Grammy nomination for their contribution to the True Blood Season 2 soundtrack, pops up in a   [Spin Magazine cover story](span class=) on England's latest musical export, Florence and the Machine.

In the article, British indie rocker and lead vocalist Florence Welch, who was voted artist of the year in the Decenber 2010 issue of Spin Magazine, is profiled, tooling around New Orleans in the borrowed Cadillac of Adcock along with his firearm as she is interviewed. 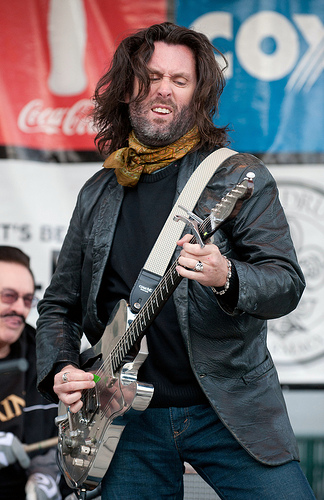 As is mentioned in the article, Adcock recently produced a version of Buddy Holly's "Not Fade Away" for Florence and the Machine's contribution to a tribute album in honor of the late rock and roll legend.

Read the online edit of the article here.