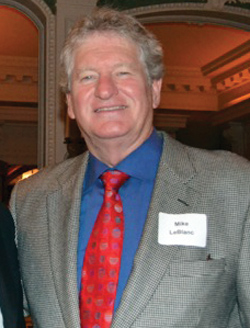 Prominent Lafayette businessman and aspiring politician Pat LeBlanc died in a plane crash in north Vermilion Parish in March 2008, his untimely death at 53 more tragic in that it came amid a federal investigation into his and brother Mike's business practices in Texas.

His death left many questions unanswered, as it remains unclear what ultimately came of the inquiry into an alleged bribery scandal in Texas involving the LeBlanc brothers' Premier Management Enterprises, a company that had contracts with jails to provide commissary services. The LeBlancs maintained their innocence and were never charged in what the FBI characterized as an interstate investigation, but one dark cloud lingers: The then-Bexar County sheriff and one of his close friends now have criminal records because of their relationship with the LeBlancs' company ("Patrick LeBlanc's Troubling Candidacy," The Independent Weekly, Oct. 17, 2007).

An enterprising entrepreneur who was well-connected politically, Pat LeBlanc amassed significant wealth in his lifetime, leaving the bulk of his estate to his wife, Jennifer Scialdone LeBlanc, and his two children. Court records, however, reveal a number of heated legal battles brewing over the estate: At least three lawsuits have been filed by Jennifer over the assets of companies Pat and Mike had an interest in. And another suit - filed Sept. 1 - resulted in an eviction notice being sent to several LeBlanc businesses housed in offices at 147 Easy St., just off Eraste Landry Road.

The Gazette is a Youngsville-focused weekly broadsheet the LeBlancs purchased and renamed shortly following Pat's failed bid for the state Legislature in 2007, in large part because the campaign believed media coverage of the brothers' Texas troubles derailed Pat's candidacy. He was solidly defeated by fellow Republican Page Cortez, 55.5 percent to 44.5 percent, after leading in polls during much of the campaign. The publisher of the Gazette, a weekly paper, is former state Rep. Ron Gomez, who ran unsuccessfully for mayor of Lafayette in 1992. Gomez worked on Pat's campaign and was one of his staunchest defenders in his 2007 state House bid.

Along with other assets and lifetime use of the family home, Jennifer LeBlanc also inherited 50 percent of the income produced by Pat's business holdings, including LeBlanc Group Architectural Corp., LeBlanc Construction, LCS Correction Services, American Phone Systems and Brothers Commissary Services (formerly Premier Management Enterprises). When Pat was alive, the businesses located on Easy Street paid a combined $5,000 per month to Pat personally, Jennifer claims in her lawsuit. After his death, they stopped paying rent, she says, also noting that two LeBlanc businesses - LeBlanc Construction Co. and America's Best Cleaners - were shut down, while two new companies moved in (among which was Mike's MWL Construction, which she calls a competitor of LeBlanc Construction). At the time she filed the suit, Jennifer claimed the businesses owed $145,000 for 29 months of back due rent. She also asked the court to evict the tenants and is still seeking damages and attorneys' fees.

In their Oct. 13 answer and reconventional demand, however, the defendants deny that they owe rent or that any rental payments were ever made to Pat. The $5,000 in monthly payments to Pat was not for rent but for costs associated with operating the businesses - such as reimbursement for taxes, electricity and other out-of-pocket costs - attorney Mike Robinson of Baton Rouge tells ABiz.

Robinson also says that the companies were considering vacating the Easy Street property before Jennifer threatened and obtained the eviction notice - and says they were in the process of moving when the eviction was granted. "They were considering moving to a larger space regardless," he says, though acknowledging that the legal action likely expedited their departure.

In a brief phone interview, however, Gomez says he was told - before he left to go out of town in August - that the companies were relocating because they had been evicted. Along with the Gazette, all of the companies moved to 100 William O Stutes St., near Audio Video Innovators, in early September.

If the court determines that the defendants owe rent, they are requesting that the rent be offset by the value of improvements they made to the Easy Street property, Robinson says, which includes an addition to the building and other improvements totaling $135,000. And they make it clear that Jennifer, at best, would only be entitled to 30 percent of any rent that is due. They further claim Jennifer obtained a temporary restraining order illegally: "Scialdone obtained a temporary restraining order in this suit without proper notice to the respondents or their counsel, without a proper showing of risk or irreparable harm, and without posting of security, all in violation of governing Louisiana law."

That order, which also required the evictees to leave their movable possessions behind at the Easy Street property, was dissolved shortly after it was issued because the evictees had already vacated the building, according to attorney Candice Hattan. "It is submitted that this action was taken for the sole purpose of embarrassing and harassing those who were most loved and admired by the decedent, and in an effort to force members of the LeBlanc family to meet Scialdone's astonishing money demands," writes Hattan in her motion to quash notice of the deposition of Dianne Roger, who has worked as office manager for the LeBlancs for more than 25 years and who, according to Hattan's motion, has fully cooperated with Jennifer's requests for documents.

Mike LeBlanc declined comment for this story, referring ABiz's inquiry to Hattan, who did not return several phone calls.

Roger's deposition has been rescheduled several times, and is now set to take place in January, Robinson says.

The last activity on the case is noted in a minute entry by District Judge John Trahan on Nov. 29 concerning a motion by Jennifer for an extension of time to "prevent the disposal of movable property." The motion was granted: "The defendants are not to alienate or dispose of any and all movable property in their possession until further orders of the Court," the ruling reads.

Robinson, however, says the issue is moot because all of the furniture and equipment belonged to the companies. He maintains that any of Jennifer's and Pat's personal property had long been removed from the offices.

Jennifer's attorney, Dominick Bianca, could not be reached for comment before press time.

In other legal wrangling over the estate, Jennifer contends that a number of Pat's businesses were very profitable at the time of his death and produced significant income in the form of salaries and dividends paid to him. "Yet since Mr. LeBlanc's death, despite business profits and distribution prior to his death, these entities have produced no income, zero, to the estate," she claims.