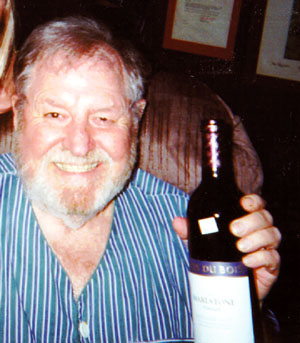 Those were the words of John Quitman Hyde IV: former Lafayette police chief, a unique raconteur, a fixture presiding at Red's and a personality that wouldn't quit.

The chief's life ended last week at the age of 72. He spent the last 24 years battling the limitations and occasional setbacks from a stroke he suffered in 1981. In spite of communication challenges and restrictions on movement, he lived his life to the fullest.

Quite often it took a gentle game of charades to figure out what he was trying to say, but it worked. He knew what he wanted to say, and he prevailed. On occasional visits at his home it was a ritual to go through albums of pictures, boxes of mementos, newspaper clippings, and plaques and pictures on the wall. Each visit required repetition of the process, but it was great being able to relish past experiences, especially those we shared. And many laughs came with them.

When I came into office in June 1980, I got to know the chief and engage his strong personality before his stroke. He was full of excitement at the prospect of running a police department. Sitting across the desk from him, I heard his ideas of what he wanted to accomplish for the Lafayette Police Department. There was good reason to be optimistic about his goals. After all, the chief had a highly commendable background of law enforcement and investigation. He was charged up and ready to go, and he did a great job. Unfortunately, it only lasted 14 months.

The stroke left him paralyzed on one side with very little ability to speak. With therapy and determination he persevered and established a unique way to communicate. And within that communication, his strong and vibrant personality was intact. A lesser man would shy away from society, but not the chief. He made his presence known and felt.

He had strong family support over the years as well as a long list of friends who enjoyed a friendly joust and/or encounter. Being a friend of the chief was a privilege, and it was fun. He and I saw eye to eye in the area of politics, and in that respect communication seemed easy. Most all comments came in pairs of words. Mention Ronald Reagan, and the comment was, "good man, good man." He probably knew the names of most people who would stop to talk with him, but he just made it simple and called everybody "baby." He had nicknames for everybody he liked and those he didn't like, and sometimes an "s.o.b." might slip in.

John Q. Hyde was a "good man, good man" in the truest sense of the word. He was a husband and father, a true family man. He was a law enforcement officer, something he was proud of. And he was the chief ' leaving an indelible print on the city of Lafayette and the people with whom he came in contact.

So long, chief, and may you finally rest in peace.