New Star at the Bar

Since Trynd is a made-up word, lurching toward trend, but with that yo-yo of a Y dragging it in some other direction, I'm right now going to create a new coinage for it. For me, Trynd now means transformation, which is the long and painful process restaurateur Nidal Balbeisi is going through, trying to get his million dollar restaurant and bar ready to launch by the new year. 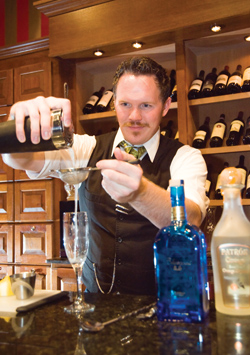 New Star at the Bar

Since Trynd is a made-up word, lurching toward trend, but with that yo-yo of a Y dragging it in some other direction, I'm right now going to create a new coinage for it. For me, Trynd now means transformation, which is the long and painful process restaurateur Nidal Balbeisi is going through, trying to get his million dollar restaurant and bar ready to launch by the new year.

Trynd, with its awkward name, has been see-sawing since Balbeisi bought the former Masonic Temple in July, trying to find a culinary identity and a cultural one as well. Balbeisi brought in half a dozen chefs to audition before settling on Dean Mitchell, former restaurateur and Michelin four star chef. We're all waiting to try Mitchell's menu, TBA in January.

But Balbeisi's latest hire, Luke Tullos, may be his best move in the game of attracting Lafayette's most discriminating gastronomes. Tullos is one of the brightest stars on Lafayette's cocktail scene. He, along with Pamplona publicans Andrew Payne (now the general manager) and Ansen Trahan, set about redefining the cocktail culture over a year ago. Tullos was exploring pre-Prohibition cocktails, those Belle Epoque quaffs with swanky names like The Aviation, The Corpse Reviver and of course New Orleans' own contribution to the cocktail pantheon, The Sazerac, (using newly legal absinthe as it was intended).

Tullos was part of the Pamplona team until late November, when an offer he says he couldn't refuse, from Balbeisi, put him in charge of the entire bar program at Trynd. Typical of the ambitious Balbeisi, Trynd will house not one but three bars, each with a different atmosphere and style. Tullos is currently working to refine the distinctions.

It was difficult for Tullos to leave Pamplona, which was the place where he truly found his calling. Tullos, 28, who has a degree in public relations from UL, had worked in banking, retail, banquet management and waited tables before he found his way behind a bar, at the City Club. "It was pretty ironic," he says. "Me, a Southern Baptist, who never had a drink until I was 21, was suddenly serving drinks." It took him a week to figure out that he loved mixology, and that his PR training made him a perfect host, a big part of the bartending job.

When Pamplona opened in 2007, Tullos was one of the first bartenders hired. About six months into the job he became general manager there. After a year and a half, he left for Austin to give working in the public relations field a whirl. Nights he bartended at restaurant Peche, on fabled Sixth Street. It was at Peche that he discovered the long and honorable history of cocktails, just as the trend in pre-Prohibition drinking popped its cork on the national scene. "I found out that bartending was a viable profession," says Tullos. He made a beeline back to Acadiana and Pamplona.

Within months the bar was stocked with absinthe, Creme de Violet, Lillet, St. Germain, Campari, Averna, Hendrick's gin, Cîroc vodka and an entire world of bitters, tinctures and fresh fruit flavorings. The kitchen and bar began to fuse creatively, cocktails now pairing with dishes. As the shakers rattled and beautiful frothy elixirs emanated, what once was a largely Spanish wine bar transformed into a heady cocktail scene with the same unbridled gaiety as a speak-easy in Atlantic City, circa 1920. The bar business at Pamplona quadrupled.

That was about a year ago. While Balbeisi opened his big upstairs bar at Trynd six months ago to serve as a swanky nightclub downtown, it hasn't found an identity yet. The food and cocktails will begin in traditional Italian style, then head for the stratosphere. That's what separates the merely trendy from being Trynd. - Mary Tutwiler