Steve Riley rolls out his new CD Grand Isle on Dec. 30 and on the following night, Ryan Brunet and the Malfecteurs and the Viatones ring in the New Year.

One thing is for sure, when a big holiday rolls around Mardi Gras, Xmas, Festival International, Festival Acadiens The Blue Moon Saloon will have a righteous live show going down. The Moon always has the action. New Year's Eve is no different. Celebrate the New Year with two bands that kick it old school. Cajun music wunderkind Ryan Brunet takes a break from crashing on people's couches and playing in France to return home and ring in the New Year with his band The Malfecteurs. If you like real Cajun music with your suds and firecrackers, go to this show. "We'll be handing out party favors at the door and free champagne at midnight to make for a rocking' bash that won't stop until the early hours of 2011," says Blue Moon owner Marc Falgout. Retro garage rockers The Viatones open the show. On the preceding night Dec. 30 you can catch Steve Riley & The Mamou Playboys as they toss aside roots-music formulas and throw the CD release party for their new genre-bending CD Grand Isle. Bust it. 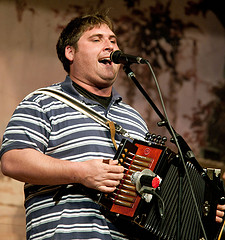