District 3 Lafayette City-Parish Councilman Brandon Shelvin has not put his legal troubles behind him: IberiaBank, which holds the second mortgage on his home at 301 Monarch Drive, filed suit against him four days before Christmas, claiming he defaulted on a $41,000 loan in August. 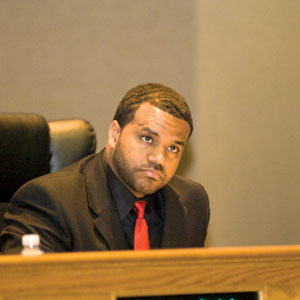 [Editor's Note: This story has been modified from its original version, as new information suggests Shelvin may have used the loan from IberiaBank to pay off the debt to EasyCare.]

District 3 Lafayette City-Parish Councilman Brandon Shelvin has not put his legal troubles behind him: IberiaBank, which holds the second mortgage on his home at 301 Monarch Drive, filed suit against him four days before Christmas, claiming he defaulted on a $41,000 loan in August.

While Shelvin's financial troubles quieted down in the latter part of 2010, early in the year he faced mounting legal problems - much of which was already in the public record before IberiaBank granted him the loan Jan. 19. In a March 3, 2010, cover story, "The Problem with Brandon Shelvin," The Independent Weekly reported on his questionable judgment, ethics, truthfulness and suitability to serve in public office amid his legal troubles, which dated back to May 2009, the most egregious being his pocketing customers' vehicle warranty money from a defunct used car company he once owned.

The warranty company, Atlanta-based EasyCare, did not receive from Shelvin money he collected from customers for extended warranties on approximately 20 vehicles purchased at Shelvin's ThriftyWay Car Sales between July 2008 and February 2009, according to EasyCare's records. Depending on factors like the vehicle's make and model, mileage at time of purchase, term, coverage and deductible selected, the cost of the service contracts ranged from $700 to $1,800. "I have been working with Brandon Shelvin and IberiaBank who is the lienholder on the majority of those contracts," Jan Larche, customer relations and training manager for Automobile Protection Corp., the parent company of EasyCare, told the paper at the time. "He's in the process of making payment to us to resolve those issues," added Larche, noting she had been in contact with Shelvin and the bank in the prior several months.

Minutes before the story on Shelvin's financial problems hit the press, we were advised by EasyCare via e-mail that Shelvin had made good on the contracts. EasyCare received a wire transfer from Shelvin on the morning of March 2, 2010, and was paid in full. Larche declined to release how much her company was paid, and it remained unclear how someone so deep in debt managed to get his hands on what likely amounted to anywhere from $20,000 to almost $40,000 - the amount, perhaps not coincidentally, that he borrowed from IberiaBank.

IberiaBank declined comment for the March story, and its attorney, Craig Ryan, could not be reached this morning. GMAC Mortgage LLC holds the first mortgage on Shelvin's home at 301 Monarch Drive, which he purchased in his district in June 2007 for $85,000. (Lafayette's city-parish charter requires that a candidate for the council live in the district for the seat he is seeking at least six months before qualifying for office. Shelvin qualified on Sept. 4, 2007, less than three months after purchasing the Monarch Drive home in District 3; he previously lived in District 2.)

Shelvin paid off another debt in March, but matters got worse for the councilman in April, when he defaulted on a loan backed by his minister, much to the minister's surprise.

When asked for comment on the December lawsuit this morning, Shelvin hung up his cell phone.

IberiaBank is seeking $36,514 in principal, plus $334 accrued interest through Dec. 2, 2010, plus interest on the principal since 2010 at the default rate of 21 percent per annum until paid, plus late payment charges in the amount of $467 and attorneys' fees in an amount equal to 25 percent of the principal balance due under the note and court costs.