All of the major policy issues debated since last hurricane season have one thing in common: Acadiana's Scott Angelle. 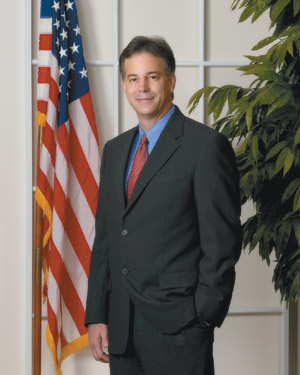 Scott Angelle is all over the map.

On a recent morning at his downtown Baton Rouge office, the secretary of the Department of Natural Resources resembles an excitable geography professor. First he points hard and fast to Caddo Parish, breathlessly offering an overview of the state's dry hole tax credit. Next he jabs Cameron Parish and releases a spitfire evaluation of coastal land loss. He doesn't pause or miss a beat, relentlessly hammering on policy issues.

Since Hurricane Katrina made landfall last year, he has played a major behind-the-scenes role in the debate over levee board consolidation and legacy sites, as well as Gov. Kathleen Blanco's battles to increase offshore royalties and create new government-sponsored oversight groups. "I've always felt that if my plate gets too full, I'll just get another plate," he notes.

Angelle served as president of St. Martin Parish before fellow Acadiana native Blanco tapped him for the DNR post two years ago. The two are close allies and rumors ran rampant during the recent regular session that Angelle was on the short list for lieutenant governor if Mitch Landrieu won his bid for mayor of New Orleans.

He has swatted down the chatter in the past ' not too vigorously ' and contends he pays little attention to rumblings about him running for a different statewide office. But there's no doubt that Angelle's stock is rising. It's a dramatic turnaround of fortune for a man who was once criticized by sectors of the oil and gas industry for not having enough experience and insight for the post.

"They didn't want me in this job," Angelle says.

That stigma didn't linger long. Angelle quickly proved himself as a hands-on bureaucrat and energetic spokesman with an innate ability to unite feuding parties. "He has the personal demeanor and capability to handle major issues," says Wilfred Pierre, a Democrat on the House Natural Resources Committee. "He can be forceful and jovial and whatever it takes."

Angelle claims he's proactive to a fault at times and grows restless with government studies, which are a necessary evil for coastal resources and big oil matters.

"I don't like being on the defensive," he says. "I'm an offensive player."

That philosophy guided him in the wake of Katrina and Rita, after Angelle flew around the state taking inventory of his devastated constituencies. He was instrumental in forming the Coastal Protection and Restoration Authority, which forced hurricane protection, coastal restoration and flood control under one umbrella. The CPRA also served as a launching pad for efforts to consolidate levee boards in south Louisiana.

The merging of levee districts became a war cry following the 2005 hurricane season. Voters demanded change and it was considered a top policy issue in independent polls, but lawmakers disagreed openly about their regions being included in the plan. "Some days left you just standing there scratching your head," Angelle says. "But I never thought the legislation was doomed. I never thought we weren't going to pass a bill. I just think there were people out there who were resistant to change." A blueprint for levee district consolidation in southeast Louisiana ultimately passed in February, paving the way for further levee board consolidation.

With that victory in hand, Angelle spent the spring urging lawmakers to pass a bill that would force the clean up of huge fields polluted by oil companies. The multi-layered issue monopolized his time; landowners wanted to get paid for the mess, trial attorneys wanted to make sure people could still sue, environmentalists wanted a stricter law, and oil interests didn't want to face massive waves of new litigation.

Angelle operated a policy war room, leaving the arm-twisting to the Governor's Office while his team hammered out the actual legislation, which changed several times during session. Even though he's no political novice, the legacy site debate served as a refresher course on what it's like to work with the Legislature.

"If you're not sure about how something is going to be received by the Legislature, you will definitely find out during the process," he says.

Angelle also has Blanco's back in her fight to increase offshore royalties. Although the state contributes more than $5 billion to the federal treasury each year from offshore drilling, it only gets back about $39 million. In order to boost the kickback, Blanco is threatening to refuse to sign off on the royalty tally for August. Angelle's office traditionally administers that paperwork, and Angelle is supporting Blanco's potential boycott.

"He has been the common denominator on all of these issues," says Reggie Dupre, a Democrat on the Senate Natural Resources Committee. "You can expect to see a lot of him."

Observers like Dupre, Pierre and others call Angelle the most high-profile secretary in DNR's history. Angelle doesn't reject that characterization but refuses to openly discuss what he plans to do with that political momentum. He only answers vaguely, with a coy smile.

"Let's just say I have chosen to dedicate my life to public service," Angelle says.