The opera was composed just after Puccici's most famous, Madama Butterfly, commissioned by the Metropolitan Opera, and premiered in New York in 1910. The premier starred Enrico Caruso and Emmy Destin, for who the leading roles of Dick Johnson and Minnie were written. 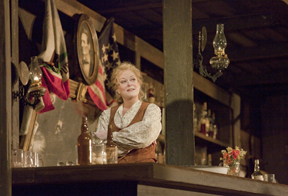 If you think an opera set in a saloon stocked with gold miners, dancing girls, sheriffs, posses and rustlers is an incongruity, think of the Divine Sarah (Bernhardt) star of the French stage, who toured the U.S. nine times between 1880 and 1918. She performed plays like La Dame aux Camélias and Cyrano de Bergerac, sometimes in tents and saloons to crowds of cowpokes.

And if 19th century setters could long for high culture now and then, so should you. The Girl of the Golden West is an easy entry into the world of opera, the Italian lyrics translated in superscript so you know whether to laugh or cry.

Now, on the occasion of its centennial, all-American diva Deborah Voigt sings the title role of Minnie, starring opposite Marcello Giordani.

Puccini's La Fanciulla del West screens January 8 at 12 noon in the James Devin Moncus Theater in HD. Admission is $8 for children, $12 for members, $16 for non-members and $14 for seniors and students. That's a bargain folks. Call 337 233-7060 or go to the AcA's website for more information.