Originally set for one showing, ticket demand has spurred a second screening, both scheduled for next Wednesday evening, January 12, at The Grand Theatre on Kaliste Saloom Road.

The Independent Weekly Lecture Series launches for 2011 with a complimentary screening of the acclaimed documentary Waiting for Superman. Originally set for one showing, ticket demand has spurred a second screening, both scheduled for next Wednesday evening, January 12, at The Grand Theatre on Kaliste Saloom Road.

The stirring film tackles one of the biggest challenges facing our country today: the current state of public education and how it is affecting our children. Doors for the first screening open at 5:30. Opening remarks and introductions begin at 5:50. The film lasts an hour and 45 minutes and will be followed immediately by a panel discussion, moderated by Independent Managing Editor Walter Pierce. Panelists include The Picard Center's Dr. Billy Stokes; educator Melinda Mangham; LPSS school board member Hunter Beasley; parent activist Sarah Walker; and Louisiana Next Horizons member Greg Davis. The second screening will begin at 8:45. The panel discussion will also be video-taped and posted on theind.com the following day.

Two tickets are reserved for each LPSS public school so that parents representing every school can attend the first screening and panel discussion. As of this writing, only parents from Paul Breaux and L. J. Alleman have requested tickets. The remaining tickets in the schools' allotment for the first screening will be held until close of business on Monday, at which point they will be released to the public.

All ticket requests should be directed to Robin Hebert via email at [email protected] or by phone, (337) 769-8603. The Independent would like to acknowledge the generous support of presenting sponsor IberiaBank and supporting sponsors Cox Business and Associated Travel for making this important event possible. 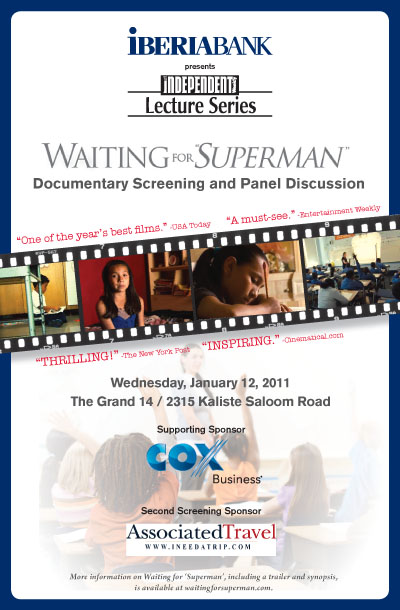