Cajun and Creole cowboys aren't just the guys with white hats on the bandstand, or trail riding on Saturday mornings. The roots of horse and cattle traditionS go back to the settling of southwest Louisiana in 1765, with the Dauterive Compact, signed by eight men, four of whom were Broussards, and all of whom were exiled French-Canadians. These men purchased a large herd of cattle from Comanche Indians and established the cattle industry in the future United States. 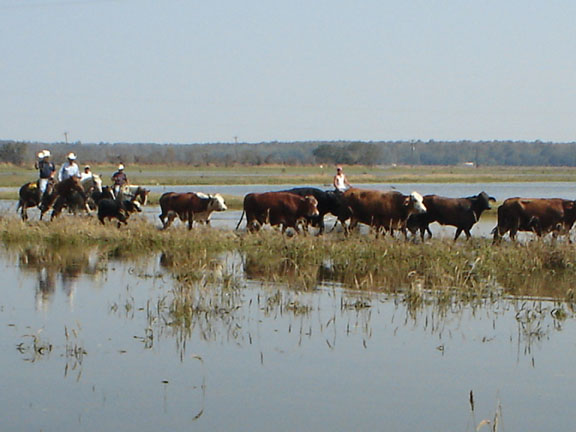 Les Vacheurs, The Cattle Ranchers of the Marsh is the subject of a talk by historian Dr. Ray Brassieur at Vermilionville on Tuesday, Jan. 11, at 6:30 p.m. Joining him are Charles Broussard, a tenth-generation rancher who managed the Flying J Ranch in Vermilion Parish, Samuel Duplantis, another family rancher from Vermilion Parish and Glenda Schoeffler, who will share the cattle brands and other artistic renderings her father recreated, including those brands made for Free People of Color. The program is part of the series In Your Own Backyard, produced by the University of Louisiana Center for Cultural and Eco-Tourism. For more information call 482-1320 or go to the CCET website.

Get ready for this talk by listening to Horse Play, a radio documentary by filmaker and folklorist Conni Castille. The show, which explores Cajun and Creole horse culture - trail rides, bush track racing, Mardi Gras courirs - that sprang from ranching on the prairies west of the Atchafalaya Basin, was originally broadcast on KRVS on Oct. 5, and is now available as a download on KRVS' website.

So quit horsing around, saddle up and move em' out.