The Greater Lafayette Chamber of Commerce keeps fighting for I-49 south. 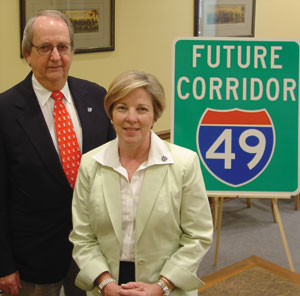 If the I-49 south project and its contentious elevated downtown connector are built, it will be the legacy of a handful of local business leaders who used the Greater Lafayette Chamber of Commerce as a platform to assemble coalitions on local, state, national and even international levels. With recent funding efforts as a barometer of its chances, Lafayette residents will likely one day travel I-49 to New Orleans ' and could head to destinations north on a contiguous interstate system that stretches all the way to Canada.

"Without a doubt, the initiative got legs in this office," says Chamber President Rob Guidry. "We worked every level of government on all this, and gradually the feds started believing us."

And while the southern leg upgrade of U.S. Highway 90 to an interstate is still a long way from reality, the fruits of their labor, $259 million, came in late July as part of a record highway and mass transit bill passed by Congress. Securing the money meant garnering support from a multi-state region, and Louisiana was a key player. Though only $59 million is for the buildout of the southern portion, it may be enough to keep the project going until a new transportation bill comes up in six years, says Lafayette businessman Bill Fenstermaker, chairman of Gov. Kathleen Blanco's I-49 South Task Force ' and one of the chamber's staunchest I-49 proponents.

Money is coming from the state as well. Last week, Blanco signed into law a bill that dedicates the use of unclaimed property to secure bonds for I-49. State Treasurer John Kennedy was the architect of that initiative.

Still, I-49 south is $1 billion away from accommodating its first travelers. "I don't think it's a catastrophe not having the money now," Fenstermaker says, noting that environmental impact studies are already under way. "You can get a lot done. The rights of way can be purchased, the engineering ' everything that's necessary to build a highway. I think they'll use the money we get to set ourselves up."

Fenstermaker maintains I-49 north, extending the roadway from Shreveport to Arkansas (where it will unite with two other interstates to reach Canada) got the lion's share of funds because it hasn't run into opposition and has already secured some rights of way. "The ones that are ready to go get the dollars first," he says.

The north has not had to fight the same battles as the south, according to Fenstermaker. The Concerned Citizens Coalition, a local group opposing the I-49 Connector, joined forces with the Tulane Environmental Law Clinic and filed a federal lawsuit in 2003 over a proposed elevated portion of the project that takes it through Evangeline Thruway, the Sterling Grove National Historic District and Beaver Park. "For years, officials have ignored the citizens' pleas for I-49 to loop around Lafayette, refusing to study a less destructive route which could halve the cost of the project and be built in a third of the time," said CCC's Kelly Caldwell when the group filed suit. "Instead, they approve a plan that severs our community and places the burden on our oldest neighborhoods and most vulnerable populations," added Caldwell, who lives in a turn-of-the-century home in Sterling Grove. The group's primary argument is that the project violates historic preservation law and that the Federal Highway Administration has failed to consider an alternative eastern bypass route.

"The litigation has had an effect," says Fenstermaker. "We weren't ready."

The CCC lost two court battles and on Aug. 5 asked the Fifth Circuit Court of Appeals for a re-hearing of all the judges on the grounds that its June 2005 ruling conflicts with its own precedent.

"It's a delay tactic," Fenstermaker says. He and other chamber leaders remain undeterred. "We're a bunch of hard-headed people," he says.

The chamber's involvement in I-49 took root in 1992 under the chairmanship of banker Rusty Cloutier. His successor, banker Rae Robinson, formed the first local task force, and Fenstermaker continued to carry the torch. Along the way they brought in support from New Iberia, Franklin, Houma, Morgan City and New Orleans and then moved north to Shreveport (now home to the International I-49 Coalition) and on to Arkansas and Missouri, traveling throughout the region to talk to ' and win over ' anyone who would give them an audience. "They all took their turn pushing that ball up the hill," Guidry says.

Every small victory helped sustain the momentum, says Cloutier, noting that some politicians were even willing to set aside their own agendas to jump on board. For example, Franklin Mayor Sam Jones made a public commitment to sacrifice projects in his city for I-49 and then put "I-49 South" bumper stickers on every public vehicle in Franklin.

The chamber latched on to the project for three reasons: highway safety, hurricane evacuation, and jobs in the form of economic development opportunities the new interstate corridor will create. "The primary reason for me was the death toll on that highway," Fenstermaker says. "That and Hurricane Andrew, when we saw the traffic backed up [in 1992]."

A powerful political entity, the chamber group had a hand in getting one of its own, then-UL engineering department head Dr. Kam Movassaghi (who now works for Fenstermaker), into the top seat at DOTD in 1998. Just a year before, Gov. Mike Foster had appointed the first statewide I-49 South Task Force, naming as its chair Carl Bauer, a fervent I-49 activist. Bauer, who served in the state House and Senate from 1966 to 1976 and has been UL Lafayette's coordinator of government relations since the early 1990s, proved invaluable to the chamber's effort, as he had spent much of his public career pushing to make U.S. Highway 90 a four-lane roadway.

Along with consolidation of city and parish governments, Guidry, who's been with the chamber for nearly three decades, ranks I-49 as the most important initiative the business organization has ever undertaken. At times, it's also placed the local group in the state and national spotlight. Five years ago Guidry and Fenstermaker testified about the importance of the project to a U.S. House committee on transportation, and because I-49 became a multi-state effort, it also was largely responsible for Guidry being named State Chamber of Commerce Executive of the Year in 2003 and again in 2004.

Though no longer the pipe dream former DOTD secretary Frank Denton called it, I-49 south still has hurdles to jump. But Guidry is confident in the chamber's resolve. The chamber exec says politicians and groups opposed to the project have built obstacles at every turn but compares the chamber's efforts with those of a tireless canine.

"We'd run out and get the stick and bring it back, and they would be astounded," he says. "Then they'd toss it farther. But we never went away."