Since a May 2010 fire at The Recycling Foundation, recycled trash has been piling up at the Lafayette facility.

You've heard the calls to go green, to recycle and to re-use, but what happens when the companies in charge of the recycling can't process the quantity of recycled trash brought to their facility? 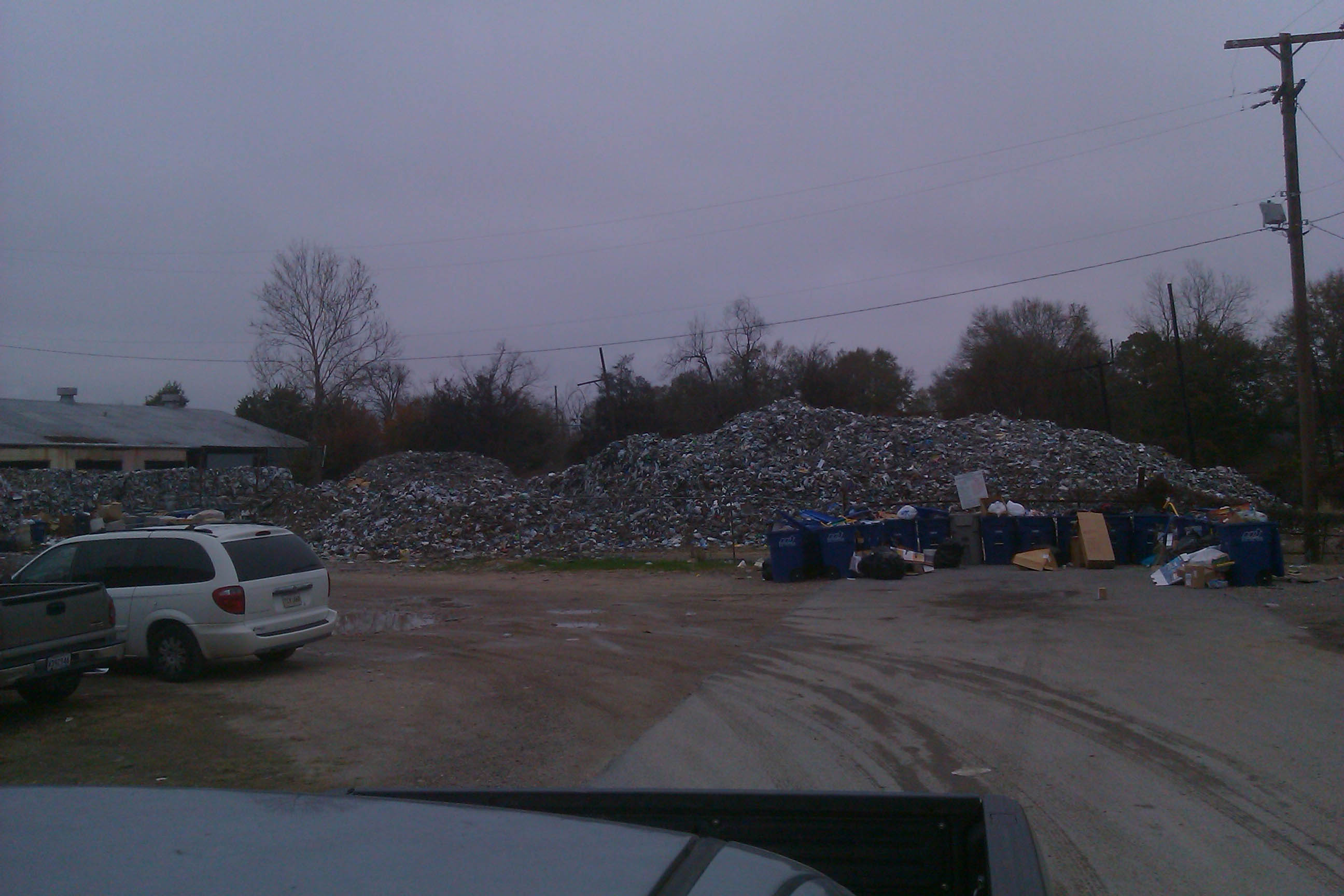 Such is the case with The Recycling Foundation the privately owned, for-profit company in charge of processing the city of Lafayette's recyclables, located on I-G Ln. near Cameron St. So what gives? Is it lack of manpower? Abject laziness? Or an overabundance of recycling enthusiasts in the Lafayette area?

It seems that a fire on May 6, 2010 at the recycling facility determined by Lafayette Department fire investigators to be caused by either mechanical heat or a spark from a Bobcat machine used to move bales of recyclables may be part of the problem. Since the fire, recyclables have been slowly, and ever so gradually, accumulating into a mountainous pile of paper, plastic, glass, and other recyclable materials a "green mountain" of sorts.

"They had a fire with bales of recyclables big 900 lbs bales that caught fire. A machine shot some sparks and it just happened to get on some shredded paper and it sparked up that bale. By the time they noticed it, it was out of control," says Mark Pope of the Lafayette city-parish government Environmental Quality Division. "I have not been there in a while, but my guess is that the overrun is remnants of the fire that they haven't had a chance to clean up. So here we are months later and they still have remnants on the ground. We've asked them to clean up it up numerous times, but they're peacemealing it."

The May fire at The Recycling Foundation facility was reported to have quickly spread, causing two additional fires on the premise as a result of high winds. Firefighters remained on the scene until midnight to extinguish the blazing piles of recyclables.

Whitney Broussard, a graduate student at UL at Lafayette, who submitted the photo accompanying this article, says that he has seen little change in the amount of clean-up occurring at the Lafayette recycling facility. "I go there twice a month to drop off my recyclables, and that big pile of stuff has been there since then and grown bigger since I moved outside the city limits in July 2009," says Broussard. "The pile is about 15' to 20' high and looks very unkempt. The material looks like it is semi-sorted and waiting to be processed, but the question for me is how long can that stuff stay out there before rotting and becoming unusable? How long before that stuff just ends up having to be taken to the dump? Are they overwhelmed? Do they need a bigger facility? Do they need more manpower?"

Mauri Robicheaux, manager at The Recycling Foundation, claims that the growing pile at their facility is leftover debris from the fire. "The pile is the material that we're dealing with from the fire we had in May. None of that is fresh or recently picked up. That is stuff we're trying to sift through our system," says Robicheaux. "Some of the material is still good, so we're slowing sending it through our system in Baton Rouge to be able to pull out the stuff that we can still recycle from it. Most of the plastics and metal is still good in it. And some of the paper."