In explaining the overlap with his UL hours, former Lafayette City-Parish Councilman Chris Williams says employees of his nonprofit worked on the controversial DHAP contract. Will UL, the DA, HUD and the FBI buy his story? Do you? By Leslie Turk

In accounting for more than 90 hours that overlapped between his jobs at UL and contract work he performed for the Lafayette Housing Authority, former Lafayette City-Parish Councilman Chris Williams claims that employees of his nonprofit Lafayette Training and Career Development Center also worked on the controversial Disaster Housing Assistance Program.

In explaining the overlap with his UL hours, former Lafayette City-Parish Councilman Chris Williams says employees of his nonprofit worked on the controversial DHAP contract. Will UL, the DA, HUD and the FBI buy his story? Do you? By Leslie Turk

In accounting for more than 90 hours that overlapped between his jobs at UL and contract work he performed for the Lafayette Housing Authority, former Lafayette City-Parish Councilman Chris Williams claims that employees of his nonprofit Lafayette Training and Career Development Center also worked on the controversial Disaster Housing Assistance Program.

Williams, who was a case manager for the DHAP from late 2007 until he was fired in August 2010 after a scathing independent audit, responded to the Louisiana Legislative Auditor in early January after the state agency's review of the Lafayette Housing Authority focused particular attention on his role as case manager for the DHAP, which was designed to help people displaced by hurricanes. The state auditor Monday publicly released its findings and recommendations for the LHA, along with responses from those it scrutinized, and now it's up to District Attorney Mike Harson to decide whether anyone will be prosecuted for possible violations of state law. 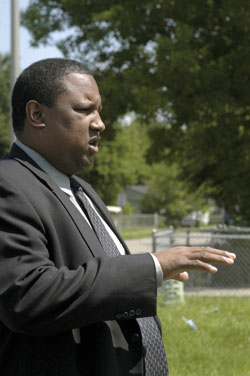 The LHA's top two former officials, Walter Guillory and Jonathan Carmouche, believed work on the DHAP contract was being performed solely by Chris Williams, not employees of his nonprofit, LTCDC.

And it's also unclear whether the U.S. Department of Housing and Urban Development, whose inspector general is also investigating, will seek reimbursement for money it is owed or will pursue Williams for breach of contract. The FBI's inquiry into the embattled housing agency is also said to be ongoing.

Harson would not comment on the matter Friday, as he had not yet had an opportunity to review the report, which he said had just been faxed to him.

Williams' fate at the university remains unclear; UL President Joe Savoie said Monday that while he has reviewed the audit, university legal counsel has not had an opportunity to weigh in.

The legislative auditor's review is an objective overview, though it does appear to raise doubts about Williams' argument, noting that the former parish official had no internal records, such as time sheets, to indicate specific hours worked by each employee. In his response to the legislative auditor, however, Williams includes statements from Michelle Mouton and Paula Scott, both of whom say they work for LTCDC and "performed duties to successfully complete requirements of the Disaster Housing Assistance Program (DHAP) as assigned." The statements are notarized by his attorney, Harold Register, who declined comment for this story. Williams has refused to return repeated calls seeking comment.

The problem for Williams is that while the last two DHAP contracts with LHA listed LTCDC underneath his signature, the LHA's management clearly understood that it had entered into the contract with Williams as case manager and that he alone was performing the work. In August, Ex-Deputy Director Jonathan Carmouche was adamant to this paper that Williams was working on the contract 40 hours per week. Carmouche also told auditors that Williams' credentials - he has a Ph.D. - along with his ability to conduct intake assessments and housing counseling services justified his pay raises to $37 an hour. Former LHA Executive Director Walter Guillory said specifically that Williams was hired because he wanted at least one case manager with a Ph.D.

The auditors appear to agree with Carmouche and Guillory, noting that the LHA "may have paid an hourly rate not commensurate with the qualifications and experience of the persons actually performing much of the case management work. ... [LHA] records and management practices seemed to support management's understanding that Mr. Williams performed the case management work himself." For example, equipment, including a laptop and cell phone, were given to Williams but not to his employees. He also was assigned a user ID and password to access federal databases to input case management work, but his employees were not, according to the audit, and the housing authority paid for case manager training for Williams but not his employees. When case managers finally began submitting time sheets in October 2009, all of Williams' were signed, "Chris Williams, Case Manager."

In his written response to auditors, Williams says his company served hundreds of families and family members on the DHAP; in fact, he says so much time was spent on the contract that he actually made money for the LHA. "During the period of the contract LTCDC has provided minimally 5,440 hours of work product to the LHA netting over 1.5 million dollars in revenue after all expenses have been paid," Williams wrote.

In its analysis of the DHAP, the legislative auditor also noted that three case managers' pay, $37 an hour (a 234 percent increase from the $11.08 they earned per hour in 2007, plus $600 a month mileage reimbursement), and raises were excessive, "significantly higher compared to other DHAPs in the area," and possible violations of state law. And, it gets worse: From March 2008 to December 2009, all five case managers received retroactive pay raises resulting in one-time payments totaling $33,200. "Because the case managers were agents of the [LHA] and may have had an employment relationship with the [LHA], these retroactive pay raises may have violated the Louisiana Constitution," the auditors wrote. Additionally, despite that HUD requires all procurement transactions be conducted in an open and competitive manner, requests for proposals were not issued, nor was there any other competitive selection process, the auditors noted.

The LHA's operations are also being investigated by the FBI and HUD and may have caught the eye of the Internal Revenue Service. The Independent Weekly's review of the nonprofit LTCDC's audited statements dating back several years, all of which are available on the legislative auditor's website, do not stipulate any DHAP money running through the organization. Williams' LTCDC, which signed another contract with nonprofit SMILE Community Action Agency in January 2010 (an association that also led state Rep. Rickey Hardy to request a legislative audit of that agency), took in total income of $172,200 in "public support and revenues grants" for the fiscal year ended Sept. 30, 2009, and showed $175,000 in expenses. It's unclear whether he claimed the tens of thousands he got annually in DHAP money as a grant and if it could legally qualify because it was a fee-for-service contract.

The bulk of LTCDC's expenses are classified as "program expenses," though there is no breakdown for how much of the money goes to salaries.

Professional CPA firms retained to conduct independent audits of the LTCDC since at least 2004 faced challenges in completing their work due to the lack of information available or provided to them. In each of several independent auditors' reports on the LTCDC, it is noted that the company's management omitted all disclosures as well as the statement of cash flows required by generally accepted accounting principles. "If the omitted disclosures and statement cash flows were included in the financial statements, they might influence the user's conclusion about the organization's financial position, results of operations and cash flows," reads the January 2010 audit report.

Louisiana Legislative Auditor Daryl Purpera's Compliance Audit of the LHA, which is available for public view at www.lla.la.gov, also questions the legality of former ED Guillory's excessive compensation and clothing allowances while working for two housing authorities, Lafayette and Opelousas, at the same time. It also notes instances where LHA employees or immediate family members entered into contractual relationships with the housing authority (in likely violation of state law), points to possible misappropriation of state grant funds and finds a lack of documentation for four credit cards (not to mention $3,000 in finance charges, $705 in late fees and $125 in over-the-limit fees). State auditors also believe the LHA may have violated HUD guidelines by hiring professional service vendors without inviting competitive proposals.