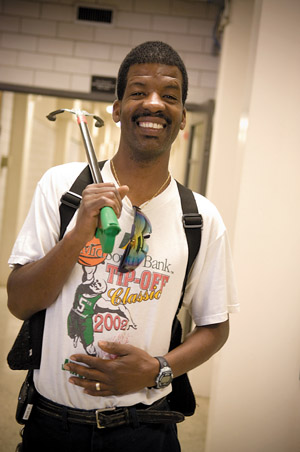 "I get home sometimes at midnight or one," she says, standing outside the Lafayette High cafeteria. "And get up again every morning at four to be here for five."

As head custodian at Lafayette High, Provost says she takes home $1,032 a month after taxes and insurance. A single mother of three, Provost struggles to afford her monthly house note, college tuition payments for her eldest child and basic living expenses. Recent increases in insurance payments for school employees and rising gas prices have made her feel the pinch even more.

"And I got another one that's fixing to graduate [high school] and needs to go to college," she says. "It's hard."

"Here, a supplementary job is crucial," says custodian Tracy Despanie, a father of three who's worked at Lafayette High for almost five years. "Without it, I don't think you'd be able to buy a plate lunch on Friday. So, it's very important that we do what we do."

At $7.51 an hour, Despanie is among the lowest paid Lafayette Parish School System employees. His monthly take home pay is about $750 a month. "It's not enough," he says.

Provost and Despanie are anxiously awaiting the outcome of pay raise proposals from both local and state government.

In the state Legislature, the governor's recommended budget includes a $500 raise for support staff and a $1,500 raise for teachers. The budget bill is now making its way through both the state House and Senate.

On June 7, the Lafayette Parish School Board meets to decide what to do about a 2.5 percent raise that it promised support workers at the beginning of the year.

The board and school support workers hoped to address longstanding salary inequities in the system ' where employees are not paid according to seniority ' but the school year is now rapidly coming to a close, and employees still have not received the bulk of the raises they were promised.

The board balked at giving raises in February, when a staff committee came back with a proposal asking for salary adjustments that would cost the board $750,000 more than it had budgeted. The staff salary proposal included some exorbitant pay raises in the range of $15,000 and $20,000 more per year for some of the school system's high level administrators.

The school board has now hired a professional consultant, at a cost of $50,000, to complete a comprehensive review of all of the support staff's salaries. The consultant will compare school employees' salaries against both private sector jobs and other school systems.

Mike Hefner, a veteran school board member of 17 years, says it would have been irresponsible for the board to approve a salary plan that in some cases would have created new inequities.

"We have to be good stewards to the taxpayers' money," he says. "This is far more complex than we initially envisioned, and at this point we just need to get some professional help on it. Whatever we do, we have to make sure we do it right."

The delays have left many support staff employees angry and skeptical. Almost 100 school system employees recently protested outside the school board offices on Surrey Street.

Last week, at a meeting room at Girard Park, more than 40 school system support staffers gathered with local leaders from the Louisiana Association of Educators union to discuss the pay raise issue. Tempers occasionally flared at the meeting from workers, many of whom were cafeteria workers, custodians and clerical employees. One woman, who had been working at a couple of Lafayette Parish schools, including Woodvale Elementary, vented that she has been bitten, spit at on the job and "cleaned up enough puke."

"Everybody's hollerin' for their raises, and they deserve it," says Provost, who wanted to attend the Girard Park meeting but had to work.

Hefner says that the employee protests and threats of a walkout have not helped in moving the issue forward. "I don't think it was a very mature way to handle things," he says. "It didn't put any pressure on me. It actually gets in the way of getting some things done. Those that did call me about it that were picketing, protesting or whatever, really didn't understand the issue in the first place. I think they were doing that based on a lot of misinformation. I think people were telling them things that weren't necessarily true."

"The problem with the consultant coming at that time is that the school year's gone," says Aitha Lewis, a secretary at Moss Annex and co-president of the Lafayette Parish Association of Educational Office Professionals. "Now you can do a plan for next year but having a consultant come in at such a late date, after the school board approving that everybody would get their salaries adjusted, it just made everybody furious."

Lewis said many employees had counted on having that extra money this year.

School system support workers have only gotten .5 percent of the 2.5 percent raise promised by the board last year. Because of the delays in appropriately adjusting salaries, Hefner says the board will now vote at its June 7 meeting on distributing the remaining 2 percent salary raise as a one-time supplement. An additional $1 million that the board added to help fix the salary inequities will go into a new salary plan ' based on the consultant's report ' to be adopted for next year.

Hefner says once a new salary plan is finally adopted for 2007, it should finally address inequities that have plagued the school system for decades. Often, veteran employees with more than 20 years of service in the school system earn less than new employees in the same job. In its review, the staff committee found that some longtime employees were underpaid by up to $9,000.

"I know that there's some people," Hefner says, "that have been victims of some pretty gross inequities and while it may be demoralizing, they put in one hell of a job for the school system. But it's got to be on the back of their mind, I'm doing all this work and so and so is doing the same thing but he's getting paid a lot more than I am."

At Lafayette High, Provost and Despanie say that newly hired substitute custodians make the same pay as they do. A veteran Lafayette High veteran teaching assistant of 26 years, who wished not to be identified, says she makes the same as all other T.A.s at the school, many of who were hired in the past five years.

Whatever the board does, Despanie says they need to do it soon, as many employees have been counting on extra money to pay outstanding bills. "It's costing us more to wait," he says. "They're not going to be able to keep good people. My second job pays more than this job. What are they going to do when all the good workers are gone and one person's going to have to do double the work?"