Wednesday, January 26, 2011
**
City Parish officials are launching a renewed effort to establish a local redevelopment authority to deal with the parish's backlog of adjudicated properties. By Nathan Stubbs**

The issue of adjudicated properties - tax delinquent homes and buildings that represent a large share of the abandoned and dilapidated structures across Lafayette - is one that's been somewhat of a thorn in the side of City-Parish President Joey Durel. Since coming into office in 2004, Durel has been looking for ways the city can facilitate adjudicated properties' return to commerce.
Wednesday, January 26, 2011
**
City Parish officials are launching a renewed effort to establish a local redevelopment authority to deal with the parish's backlog of adjudicated properties. By Nathan Stubbs**

The issue of adjudicated properties - tax delinquent homes and buildings that represent a large share of the abandoned and dilapidated structures across Lafayette - is one that's been somewhat of a thorn in the side of City-Parish President Joey Durel. Since coming into office in 2004, Durel has been looking for ways the city can facilitate adjudicated properties' return to commerce. With 11 different taxing entities in Lafayette Parish and hundreds of homes that have passed generations without a clear and proper succession, it's an inherently complex legal undertaking. Getting everyone on board with a program has proven equally difficult.

"It probably is right now for me the single greatest frustration I've had since being in office," Durel says. "Here we are seven years later and we're still talking about it and haven't gotten it done." It's estimated that Lafayette Parish currently has anywhere from several hundred to more than 1,000 adjudicated properties, mired in tax debt. "Adjudicated properties up to this point have been dormant," says attorney Gary McGoffin, who has been working on the issue on behalf of the city, "which means that it's like termites in a piece of wood. We've got holes in our neighborhoods, holes in our community that are not being filled; they're not being helped.

"It's the classic brownfield opportunity," he continues, referencing a New Urbanist term for urban infill. "So not taking advantage of that, yeah, we're less healthy than we would be if we had those properties back in commerce." 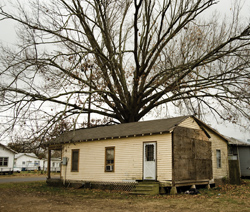 Abandoned, condemned homes such as this one on 12th Street remain in legal limbo.

The city has been looking to pass local legislation that would more clearly define the process for bringing the properties back to use, and establish Lafayette Consolidated Government's own means of donating or selling adjudicated properties that it acquires. But fears of corporate land grabs and brother-in-law deals have conspired to thwart any progress. Vocal protests of this nature on the previous council, from both District 3's Chris Williams and District 4's Louis Benjamin - who represented the two districts with the highest number of adjudicated properties - initially stalled efforts. More recently, 2008 revisions to state law regarding adjudicated properties have forced new issues that also need to be addressed with any local ordinance.

Durel suffered another defeat on the issue last year. State Rep. Joel Robideaux introduced a bill on the mayor's behalf in the state Legislature to establish the Lafayette Parish Redevelopment Authority, modeled almost completely on Baton Rouge's successful redevelopment authority. But, when opposition quickly organized from groups ranging from the Lafayette Economic Development Authority, which feared a duplication of its own redevelopment efforts, to community associations touting a need for neighborhood protections, Robideaux - at Durel's request - pulled the bill. "I was stunned at the wide range of opposition," Durel says. "My mistake last year was I just assumed that everybody would be thrilled to get property back into commerce and there were some sensitivities that I wasn't aware of."

In addition, one organization that had been established to deal with adjudicated properties, the nonprofit Lafayette Land Revitalization Authority, recently ceased operations after the Lafayette Public Trust Finance Authority pulled its seed money for the organization, citing a lack of progress. The LLRA was established as a nonprofit in 2009. It grew out of the 2002 I-49 corridor preservation plan, which called for the establishment of a land bank to help with property relocation along the corridor's footprint. The LLRA's former executive director, Joan Savoy, argues that the organization had made progress, and that it had approximately 30 properties ready for disposition, but that it first needed the City-Parish Council to pass an ordinance allowing for the transfers.

Ironically, the council may have taken the first step toward a long-awaited ordinance governing adjudicated properties at its meeting last Tuesday when the Durel administration gave a presentation on the issue. It is expected to soon return to the council with an introductory ordinance, which is still being crafted. Meanwhile, Durel says he also plans to move forward again this year with state legislation to establish a parish redevelopment authority based on the Baton Rouge model. Last month, Baton Rouge attorney Charles Landry, who helped craft the Baton Rouge Redevelopment Authority, met with local officials with concerns about how a similar organization would function in Lafayette. "This year, we've explained [the concept] better," Durel says. "We brought somebody from Baton Rouge to explain what [a redevelopment authority] did and why it did what it did and why it works. And I think there's a different level of comfort for it now."

District 4 Councilman Kenneth Boudreaux was one of those present at the meetings with Landry. Boudreaux says that he is open to the idea of a redevelopment authority, with certain conditions. "One thing I asked about that [Landry] made clear and I appreciated is that not necessarily everything that worked in Baton Rouge is going to work in Lafayette," Boudreaux says. "Our challenge is going to be to make sure that we create the model that's going to be good for Lafayette and not just take the Baton Rouge model and run with it."

Boudreaux has other concerns, noting that he wants to make sure any such government entity will work with families trying to clear their tax debts and reclaim homes, as well as neighborhood associations with concerns over any new developments in their communities.

"We need to continue to empower local people to control the final product that comes out of this," Boudreaux says. "I don't want to rush," he adds. "It's a long time coming, and it's definitely a need, but it's one of these things that I think we need to really take our time on and get it right because there are a lot of variables involved in my opinion that if not handled properly this thing could actually produce something that we would not like in the end. And I don't want that to happen."