The Greater Lafayette Chamber of Commerce dropped a bunker buster on the Lafayette business community when it gave longtime state senator and chamber champion Mike Michot an F on its legislative scorecard.

When the Greater Lafayette Chamber of Commerce hosted its annual banquet Thursday, Jan. 20, at the Cajundome Convention Center, it was the customary gala affair - a catered, white-tablecloth dinner, oratory dripping with optimism, Lafayette's titans of industry and movers and shakers rubbing shoulders and patting each other on the back. But there was one conspicuous absence from an otherwise boilerplate business fête: state Sen. Mike Michot.

The Greater Lafayette Chamber of Commerce dropped a bunker buster on the Lafayette business community when it gave longtime state senator and chamber champion Mike Michot an F on its legislative scorecard.  By Walter Pierce

When the Greater Lafayette Chamber of Commerce hosted its annual banquet Thursday, Jan. 20, at the Cajundome Convention Center, it was the customary gala affair - a catered, white-tablecloth dinner, oratory dripping with optimism, Lafayette's titans of industry and movers and shakers rubbing shoulders and patting each other on the back. But there was one conspicuous absence from an otherwise boilerplate business fête: state Sen. Mike Michot.
Other members of the Lafayette legislative delegation dropped by, some to schmooze with the business class at a pre-banquet party, others bellying up to the  Beef Wellington and nodding through the speeches. While Michot's absence was conspicuous, it was also anticipated: Ten days before the banquet, the 16-year state lawmaker - four years as a state representative, 12 as a senator - was rewarded for his longtime service to Lafayette's business interests with an F on the chamber's legislative scorecard. It was the first such report card for the Acadiana delegation by the chamber, and based on the reception to the scorecard within the Hub City's economic development community, it may be the last.

"I was probably the single strongest supporter of the chamber out of our local delegation," Michot says. "I've always encouraged the new [lawmakers] to work with the chamber. So to me it's a slap in the face."

The chamber scored state representatives and senators based on their votes on legislation the chamber considered important during the 2010 session, among them school reform measures, the Alternative Fuel Revolving Loan Fund and state employee retirement system reforms. It also used grades from the Louisiana Association of Business and Industry, which has long put out an annual legislative scorecard, to arrive at a combined or cumulative score, with the chamber's grade weighted as 75 percent of the overall grade.

But the chamber also based its grades on lawmakers' absence from these key votes - miss a vote and your grade is adversely affected. On the Senate scorecard, senators were graded based on their votes on 12 pieces of legislation. Michot missed four of those dozen votes. But, he says, as chairman of the Senate Finance Committee as well as a member of more than 15 other boards and commissions he's required to serve on, he is frequently pulled away from the Senate floor during voting sessions, and missing some of those votes was simply unavoidable.

"It's a different story for a newly elected member who can just sit at their desk and vote their machine all day," Michot says. "Obviously when I'm here at the Capitol, there are constant requests to meet with constituents and lobbyists and administrators and staff, and I'm constantly on and off the Senate floor. Even when we're on the floor voting, in a perfect world I would be seated at my desk, paying attention with no interruptions, no cell phone, no emails, no lobbyists, nobody from the district coming, nobody from the administration wanting me - that would be nice."

Michot says he wasn't aware the chamber was preparing a report card, and he was never approached by the group to account for his absence during the four votes. Moreover, one of the votes that he missed while doing Senate business he later voted the chamber line on when it came back up for consideration.

"It's difficult to find the methodology robust when it evaluates as failing one of the most pro-business public officials who has ever represented us," says Dr. Paula Carson, an assistant vice president at UL Lafayette and former interim dean of the university's business school. "If not for the efforts of Mike Michot, I think that Lafayette would have had economic difficulties long before and much more deeply than we do now." 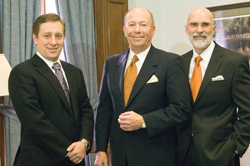 Carson knows of whence she speaks: She also serves as chair of the Lafayette Economic Development Authority, is an economic development liaison for UL, chair of Le Centre and a member of Louisiana Immersive Technologies Enterprise's board of commissions.

"I think that he has been a critical stakeholder in the development of LITE and supportive of university economic development initiatives," Carson adds. "He's been a great advocate and supporter of LEDA. He has participated in international business initiatives here in Lafayette. And I think he has judiciously utilized his influence to impact businesses of all sizes and industries in Acadiana and in the state. He is a man who never said no when it was humanly possible to do what he could do to help businesses in our community."

Like many if not most in the Lafayette business community, Carson was surprised - shocked may be a better term - when the chamber released its scorecard. While three state representatives received a 100 percent and several others earned a low A or a high B, none of the senators in the Acadiana delegation earned higher than a low B. Only former state Sen. Nick Gautreaux, now commissioner of the Office of Motor Vehicles, received a combined grade lower than Michot's 61; Gautreaux got a 58.

"You know, to be honest with you, we're all a little parochial - I looked at mine first," chuckles state Rep. Page Cortez, R-Lafayette, a close Michot friend who is likely to seek the senator's seat this fall. (Michot is term-limited.) "Anybody who knows Mike, and he's been there for closing on 16 years, knows that Mike has been a big supporter of business. He owns a business, and he's actually carried a lot of the legislation in the past that the chamber has asked, including many of the transportation bills and the LABI bills. He's been a leader for those two entities for the last 16 years, so, yeah, it was a little bit of a shock."

In fact, as a Lafayette businessman himself - Michot is the owner of Premier Medical Equipment - the senator is a longtime member of both LABI and the GLCC, and has worked closely with both, lending his time to chamber events over more than 20 years.

"I've done the banquet, I've emceed the banquet," he points out. "Everything they've asked me to do I've always wanted to do. That's why it's more surprising that they took this position."
LEDA President/CEO Gregg Gothreaux is more politic in his reaction to the chamber scorecard, but he's unwavering in his support of Michot. 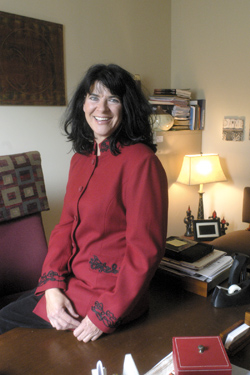 "I want to be very clear, I'm not going to comment on what the chamber of commerce does because, in fairness, they don't comment on what we do," Gothreaux says, measuring his words. "But I believe in Mike Michot. He has sponsored most of the major, important economic development legislation in the past dozen years-plus. He was awarded - and I was proud to present it to him - from the Louisiana Industrial Developers Executives Association the legislative Economic Development Champion award, and I believe it was the first one ever awarded last year. He was selected the Legislator of the Year by the [Lake Charles-based] Chamber Southwest [in 2010]. So, I think his credentials speak for themselves, and I certainly have had a great working relationship with him."

Carson, meanwhile, is a less circumspect: "For him to be publicly humiliated in perpetuity - electronic, digital records don't go away, and generation after generation will be able to access something that I think so misrepresents his contributions - is a shame, and I'm personally hurt by that."

Gifford Briggs, the lobbyist for the Greater Lafayette Chamber of Commerce, declined comment for this story; chamber President/CEO Rob Guidry did not return calls seeking comment.
As for Michot, his relationship with the local chamber is probably permanently damaged, and he has a pretty good idea what he'll do when it's time to re-up his chamber membership dues.
"That's one expense that I can easily cut from my budget," he says. "If the chamber's going to be a rubber stamp for LABI, then I can just maintain my membership in LABI."

Reached just hours before the annual chamber banquet was set to get under way, Michot cited a conflict for skipping the event: "My conflict is I'm going to be at home."

[Editor's Note: For more on this issue, read Managing Editor Walter Pierce's column, "Chamber Maimed," in this week's issue of The Independent Weekly.]