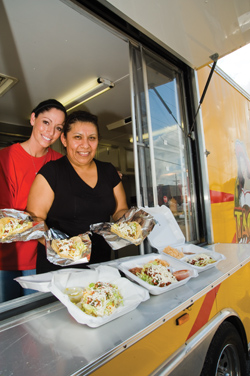 As the food truck trend invades other cities like Portland, Austin and Los Angeles and, closer to home, Baton Rouge and New Orleans, Lafayette has sat idly by waiting for its turn. Sure, there's been a hot dog cart downtown for a while, but Lafayette is ripe for a variety of self-contained trucks, setting up at different spots around town and serving up fare from barbecue to tacos and tamales.

After a year of research and checking out the scene in San Diego and Houston, longtime local bar owner Shannon Wilkerson took up the challenge and opened Taco Mama in the parking lot of the old La Promenade Mall on Johnston Street. Wilkerson admits his truck is actually a trailer and can't travel on its own, but the rest of the setup is just what local foodies have been waiting for: traditional street food served through a window that can be eaten standing up on the spot. (Taco Mama has a drive-thru window, which is also breaking the rules a bit, but it keeps the truck in business during bad weather.)

Taco Mama's menu consists of authentic tacos, flautas, burritos, tostadas, quesadillas, tamales and nachos, in addition to chorizo and egg tacos and burritos for breakfast. Wilkerson says he decided to go the taco truck route because his wife, Elena, is Mexican, and tacos are a staple at their house. But Elena isn't Taco Mama. That job goes to Irene Carreno, whom the Wilkersons found by chance at La Morenita grocery on Ambassador Caffery.

"When we decided to do this, we went over there to look at products, and I was trying to ask some of the staff and couldn't find anybody who spoke English," explains Wilkerson. "Irene was just a customer there and said, I'll help you.' She found out we were opening this trailer and asked if we had a cook."

About a week later, the Wilkersons went over to Carreno's home to taste her food, and she got the job. Wilkerson says the Johnston location has been great for business, with customers noticing the truck while they're driving by and able to easily pull in and park. Problems with zoning and the health department that have plagued food trucks in so many other cities haven't been too much of an issue.

Wilkerson got permission to use the lot from owner Ronnie Foreman, met with the zoning commission a few times and uses his bar The Bulldog as a "commissary," or central location for food preparation. "There are rules to follow, and it was a learning experience," he says. But now that Wilkerson has figured out the system, he's ready to purchase more trucks and take Taco Mama all over town.

Taco Mama already leaves Johnston to head downtown Thursday-Saturday nights. "We have more locations coming in 2011. We plan to get two trucks up and running before Mardi Gras," Wilkerson says. "And I'm already looking at spots on Ambassador, Verot and Kaliste Saloom."

With low startup costs and the ability to turn over customers quickly, food trucks are a lucrative business. As the scene continues to develop in New Orleans, the website nolafoodtrucks.com has sprung up to track their progress and provide tips and resources. The site's founders have also traveled to Baton Rouge, where about six trucks are thriving thanks to supportive city zoning and the use of Twitter to announce their locations each day. Site co-founder Lizzy Caston says she's excited to hear about Lafayette's first truck.

"It's the adult equivalent of an ice cream truck," she says. "A truck is cheaper to set up than to try to get a restaurant going. A lot of people are out of work and trying to start their own business. This is an industry that most people can get their foot in the door without a lot of credit or capital."

Originally from Portland, Caston has watched the scene grow to around 400 food trucks there and estimates the cost of getting a truck up and running at between $15,000-$30,000. "The barriers of entry are way lower," she says. "The other day I met a couple that's doing gourmet sausages off the back of a cart they pull, and I know they didn't spend more than $8,000 to do it."

Wilkerson would rather not say how much he spent on the Taco Mama trailer, but does say he purchased the truck from Atlanta and built it out himself, saving a lot of money. He estimates the truck averages about 100 customers a day. If each of those spends $6, that's easily $600 he's bringing in every day of the week.

While Taco Mama is the only game in town right now, Wilkerson knows it won't stay that way forever. "I would imagine sooner or later other people are going to do it, and that's why I'm trying to get more trucks out on the road," he says.

He's right: Kickers BBQ truck from Baton Rouge is scouting locations in Lafayette. Owner Tony Idank says he'll be in town in February to get an occupational license and look for possible locations, with plans to have a truck here before summer. He also hopes to convince some of Baton Rouge's other food trucks to join him.