The artists community rallies behind John Ray Taylor in the Arnaudville mayor's race. 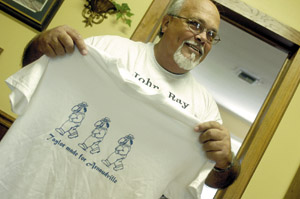 Mayor Kathy Richard of Arnaudville has experience and some loyal supporters behind her, but her opponent John Ray Taylor has something she doesn't ' a team of artists working on his campaign. Former postmaster and fire chief for the town and a supporter of its growing artists community, Taylor has received hand-painted signs and T-shirt designs printed with his slogan, "Taylor Made for Arnaudville."

Richard has served two terms as mayor, and 61-year-old Taylor says people in town are ready for a change. But it's the members and supporters of the town's growing artists community who most want him to win. Richard has demonstrated a lack of support for the artists community since its 2004 inception, and while the artists have moved forward without her, the group does want cooperation from town government. Differing views about the artists have nearly split the town in half, and Taylor says his goal is to unify the people of Arnaudville.

Unity is the underlying theme in this election. Alderman candidate Doc Broussard also says the town needs to come together. "We gotta have unity, cher," he says. Broussard served as an alderman from 1979 to 1983 and 1999 to 2003. "I think it will be a very good race, a close race," he says.

This election was expected to produce plenty of mudslinging, but things in Arnaudville are relatively quiet. "I want Arnaudville to be positive, so I'm going to be positive," says Taylor in a thick Cajun accent. "I want to win on my own merits, not by criticizing [Richard]." The most pointed shot he's taken is pointing out that Richard has served as a part-time mayor for both her terms and also sells insurance for State Farm. He says Arnaudville needs a full-time mayor, and he's got the time. It's not uncommon for mayoral positions in small towns to be part-time, but Taylor says, "I'm retired. I'm available."

Taylor and Richard have both recycled their old signs from previous elections and put them up around town, amid other signs for candidates for alderman, police chief, school board and St. Landry Parish sheriff. Taylor's two hand-painted signs by local artist Kathleen Whitehurst stand out among the group, decorated with a line of trees and a sunrise. Whitehurst also painted the words "integrity," "leadership," "honest," "fun" and "accountable." Painter Alex Nunez, who has studio space in Town Market, the main gathering spot for the artists, designed Taylor's T-shirts, which feature a black-and-white caricature of Taylor repeated three times with his slogan. Taylor holds up the T-shirt and explains the trio of images: "As you knew me in the past, that's how I am today and that's how I'll be tomorrow."

Taylor's campaign strategy is simple: going door-to-door talking to voters. As of last Wednesday, he'd visited the homes of about 99 percent of Arnaudville's 865 registered voters. His daily schedule includes driving the school bus for the Academy of Sacred Heart in the morning and afternoon and stumping before lunch and after school. Last Wednesday, he drove his black Explorer around town trying to catch voters he'd missed at their homes. He also stopped to talk to Earl Kidder, who was trimming weeds at Creations Hair & Tanning Salon, about absentee votes for elder residents.

The residents of the small town ' population 1,398 ' are reluctant to talk about politics and their support for one candidate or another. Richard did not return calls for this story, nor did Myran Chautin, owner of Myran's Maison de Manger restaurant in Arnaudville, who contributed $1,000 to Richard's campaign. Richard has also received funds from her neighbors Errol and Kim Guidroz and town clerk Dolores Quebedeaux for a total of $1,275. Taylor's only raised $170, and he and his wife have contributed $500 of their own money to the campaign.

Taylor worked with Richard as an alderman for the past four years. "She maybe lost sight of the proper way to lead the community," he says. "I do feel Arnaudville could be better. Yes, we do have a good situation, but it could be even better so." If elected, Taylor plans to update the infrastructure with new street signs and sidewalks, continue to improve the water system and re-establish the Chamber of Commerce, which fell apart under Richard's administration. On the topic of cleaning up the city, he says he would encourage people to take part in planting flowers and trees. "We could do an annual cleanup to the point of joining the cleanest city contest," he says. "There's no reason why we shouldn't be in there."

In her campaign brochure, Richard also emphasizes unity and says, "Positive attitudes with teamwork will further strengthen our town's unity and growth." But under her leadership, relations between herself, the council and police department have become strained to the point of yelling in town meetings and some officials not being allowed to talk to other officials. Taylor says the situation is ridiculous. "There's no reason why the mayor and the chief should not be able to work together. There's no reason why the policemen on patrol cannot stop and talk to me while I'm walking my little dog down the street. But now they can't. Under my administration, the council is the government by and for the people. The council makes the decisions, not the mayor."

Taylor plans to finish going door-to-door this week and finish campaigning before the Sept. 30 election. He doesn't seem phased by what the outcome of the election could mean for the town. "I'm going with the flow," he says. "Hopefully, it will pay off."