Cezanne Nails was infuriated when she heard more than a year ago that Lafayette's Royston family was undertaking a proposed major real estate development off Interstate 49 in north Lafayette. She didn't know much about John Royston or his son Kevin, but she knew enough about the criminal past of Kevin's wife, Ronnie, to be apprehensive about the project. 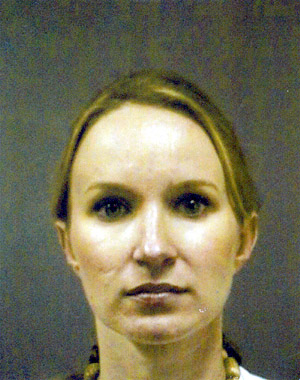 "Shortly after Ronnie started working for us, my husband got gravely ill," says Nails. "She took that opportunity to embezzle $20,000 from us."

In January 2005, Ronnie Royston was arrested by the Lafayette Police Department for stealing from Nails' Maurice company, Dockside Studio. A year later, she pled guilty to felony theft, and on April 24 of last year 15th Judicial District Judge Glenn Everett sentenced her to five years hard labor, which he suspended, and also gave her five years of active, supervised probation.

Nails says the mimicking pattern was an unsuccessful attempt to confuse her in order to conceal the crime. "I was actually shocked the whole way through this," says Nails, explaining that the attractive, soft-spoken bookkeeper did not fit the bill of a criminal. "Looking at her in court, I saw a petite, quiet blonde, the polar opposite of the row of men on the other side of the room chained together awaiting their fate," Nails continues. "But I couldn't help but wonder if all of them chained together had stolen even half as much as she had stolen in that past year."

After running up the AmEx charges, Ronnie used the Nailses' checking accounts to pay the bills. According to Nails, Ronnie wrote checks from three different accounts as part of the theft scheme.

It's unclear how the Royston family came to be involved in Couret Place, the troubled traditional neighborhood development that has become a legal debacle owing up to $2 million to local contractors and professionals who worked at the site and others who put deposits down on lots. A California real estate development company, Cal-Bay International, has been attempting to take over the project and pay off the debt ("Cal-Bay Coy on Couret Place," Jan. 24). By press time, Cal-Bay representatives had not returned an e-mail request and phone calls seeking comment for this story.

Along with her husband Kevin, an architectural intern who served as "town planner" for the TND, and his father, John, Ronnie helped market and promote the project. John, a local accountant whose past includes lawsuits filed against him over the years for failing to pay on car leases, property and expensive jewelry, led the project.

"[John's] firm is where I got an excellent reference for Ronnie to begin with," Nails says. "I guess the apple doesn't fall far from the tree-in-law."

The impact of Ronnie's theft was compounded by the circumstances of Cezanne Nails' personal life. Her husband, Steve, already in a wheelchair from an auto accident years before when he was traveling to a class reunion, was diagnosed with leukemia shortly after Ronnie went to work for Dockside Studio in mid-2003. A few days after Steve checked into the hospital, Nails' mother underwent triple bypass surgery.

"My husband's in one hospital, my mom's in another one, and they were both really, really not doing well. I wanted Ronnie here to watch the place," says Nails, who helped pass time in the hospital by knitting for Ronnie, who had recently become pregnant. "I was sitting in the hospital needle-pointing onesies and these little burp cloths to match the onesies," Nails says. "She actually had the nerve to charge on my account a dog kennel and outside storage shed to her house. While they said my husband had less than two weeks to live, she was online in my house charging stuff to me with my credit card."

Nails was immediately suspicious when she opened her AmEx bill in December of that year. "It was a gigantic amount of money," she says. Nails says when Ronnie came into work that day, she confronted her. "I said, 'What is this?'" Nails recalls, "and she said, 'Oh, did I accidently use your card instead of mine?'"

Ronnie and Kevin Royston did not return phone messages and an e-mail seeking comment for this story.

Within months of being caught, Ronnie was making significant restitution, which perplexed both Nails and Assistant District Attorney David Smith, who prosecuted the case. "You just don't see it like that, values to that amount being paid off so quickly," Smith says. "I remember it coming up that she was doing some kind of development, something about a subdivision," Smith adds, though he has no idea if money from Couret Place was used to pay back Ronnie's victims.

Nails says she was willing to forego restitution to get a felony conviction because she learned Ronnie stole from her shortly after her arrest for pilfering $26,420 from Lafayette Auto Auction in Scott. "I said, you can keep the money," Nails recalls telling the prosecutor. "The reason she stole from me is the first time she paid back the money [to Lafayette Auto Auction], and nobody ever knew about it," she continues. "I just wanted to expose her; I could not face the fact that she would do it to someone else."

In April 2003, just weeks before joining Dockside Studio, Ronnie Royston was arrested by the Lafayette Parish Sheriff's Office on 18 counts of felony theft and three counts of misdemeanor theft from Lafayette Auto Auction. Smith, who also prosecuted that case, billed them as a single count of felony theft, and the charge was amended to a misdemeanor in return for full restitution. "[Lafayette Auto Auction] wanted restitution," Smith says. In September 2004, Ronnie pled no contest to theft under $300 and got a six-month suspended sentence and two years of unsupervised probation. At that time, she made full restitution with a money order, according to court records.

In income and expense statements John himself provided as part of the legal action against Couret Place Inc., he notes that $14,600 in sales commissions was paid to an R. Royston. According to the Louisiana Real Estate Commission, 31-year-old Ronnie Royston is not a licensed agent, a legal qualification for earning a real estate sales commission in the state. If she did earn sales commissions on real estate transactions at Couret Place, prosecutor Smith says she could be back in court. "If there's a victim who makes a complaint, that'll get her in trouble. If she screws up on probation, she's going to go back and do five years," he says.

Such a scenario would add more irony to Nails' situation. She says Ronnie was trying to become a real estate agent when she worked at Dockside. "She sent away for the packet and charged it to me," Nails says.

Since the ordeal with Ronnie Royston and last year's felony conviction, Nails says her husband is doing well, and so is Dockside Studio. The Nailses are heading to the Feb. 11 Grammy Awards in Los Angeles, where two artists they recorded ' Tab Benoit (with Louisiana's LeRoux) and Irma Thomas ' are nominated for Grammys. "Life is good," Nails says. "I'm just glad it's all over with."