The subdudes' latest CD, Behind the Levee, takes a nostalgic look at the now-infamous water protection system. 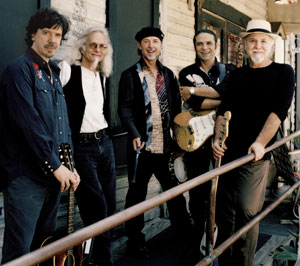 When a veteran band born in New Orleans releases a post-Katrina album, fans may be tempted to squeeze greater meaning from the lyrics, especially if the album is titled Behind the Levee. But don't expect to hear any songs about hurricanes, displacement or government bumbling on the subdudes' new CD.

"None. That's a very important point. None," says Tommy Malone, vocalist and guitarist for the venerable roots-rock group. "It was all completely written and recorded long before [Katrina]."

As the CD's January 2006 release date approached, Malone and his bandmates considered the impact and connotations of the album's title.

"Certainly that's something we thought about," Malone says. "It's referencing one of the songs, which is the Papa Dukie song, talking about our playground as kids, literally the area called the batture behind the levee, which is where you get away from your parents and do all the fun stuff," he says. "We just thought with all the crap that everyone's going through this year, and the negativity attached to that word ' why not just do it and put a positive spin on that word 'levee.'"

And spin positively the 'dudes do. The first single, "Papa Dukie and the Mud People," recalls with nostalgia when two busloads of hippies set up camp in Wallace, one town over from Edgard where Malone and percussionist Steve Amedée spent their formative years. Eddie "Dukie" Edwards ' a professional drummer who returned home from Los Angeles with the hippies ' and his band set up a stage, threw parties and emitted smoke and patchouli.

"It was huge," Malone says. "It was like, I don't know, how do you describe that, when you're a teenager? That's like taking your first drink, or getting your first â?¦ you know. Girl. Or your first anything. It was real genuine stuff."

Most of the local folks were curious, and a few thought the hippies would corrupt their children. Malone says he and Amedée weren't corrupted any more than they wanted to be and points out that Papa Dukie did what they do now: "Ride around and set up and play music."

And when the subdudes come to town, a welcome wagon often precedes them. "Papa Dukie and the Mud People," with its infectious chorus of "na-na-nas," charted in the top five for AAA airplay, and Behind the Levee reached No. 1 on the Roots Music Report. Multiple tour dates on their current tour are selling out.

While the band's 2004's Miracle Mule CD was a landmark return after an eight-year hiatus, Behind the Levee signals the subdudes may be back to stay. Both albums contain some of the strongest material the band has offered since its 1987 inception, without a drastic change in sound. The lyrics are still simple, almost hymn-like, with the harmonies adding the depth, and the music is still built on the backbeat provided by minimal percussion while Malone's guitar and John Magnie's piano and accordion work augment the rhythm section. The subdudes' firm grounding in Americana continues to blossom with maturity.

"I think in the past we were a little guilty of not wanting to go back and rewrite," says Malone. "You know, it blurts out and then you leave it alone. I think we've gotten older, and we spend more time trying to fine tune it a little bit."

For Behind the Levee, the subdudes enlisted blues/pop singer/songwriter and guitarist Keb' Mo' to aid in the fine tuning, which fleshes out a stronger R&B flavor. The Dirty Dozen Brass Band contributes as well. Keb' Mo co-produced the album, plays guitar and mandolin for a few tracks and also played taskmaster.

"It was pretty intense; a lot of hours, a lot of pretty hard work," says Malone. "He's a pretty focused, hard working guy."

After their Festival International appearance on Thursday evening, Malone and company are looking forward to getting behind the levee at this year's New Orleans Jazz & Heritage Festival.

"I think it's gonna be very emotional for a lot of people," Malone says. "A healing thing. A coming together. There for bigger reasons than just getting up to perform their set."

Malone and bassist Jimmy Messa were both displaced by Katrina and have since returned home, but the work is still ongoing. "Jimmy just got walls up about a week ago. My downstairs is being rebuilt as we speak; I just got walls down there, too," Malone says. "Now we get to get it all nice and pretty and paint it and decorate it and put some furniture in there ' and then June 1 is hurricane season."