While each candidate belongs to an opposing political party, Nathan Granger and Jonathan Perry seemed to agree with the other on many of the topics raised by the panelists in their first and quite possibly only debate. 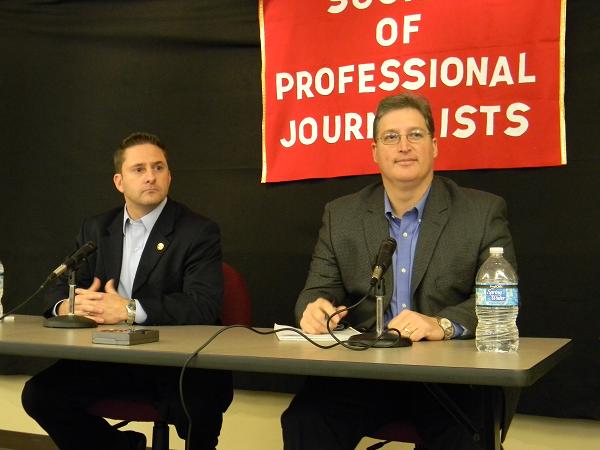 Granger founded  Quality Companies in 2000, which provides oil and gas construction, fabrication and contract production operations. In 1990, he earned a degree in finance at UL (then University of Southwestern Louisiana) and went on to earn his MBA at UL Lafayette. He was then elected to the police jury in 2007.

Perry has been an attorney with Perry Law Firm since 2004. He is a 1995 graduate of the University of Louisiana at Monroe (then Northeast Louisiana University) where he majored in criminal justice with a minor in sociology. He served as a police officer in Kaplan, then served on the Kaplan City Council from 2002-2006. He received his law degree from Southern University in 2003 and was elected to the state House of Representatives in 2007.

While each candidate belongs to an opposing political party, both seemed to agree with the other on many of the topics raised by the panelists in their first and quite possibly only debate, held at Burke-Hawthorne Hall. The election is Feb. 19.

Asked if their respective religious views would affect their political outlook, Granger replied, "We are both pro-life, we are pro-family, we are pro-community. Denomination doesn't matter. I've had a lot of questions about my faith, and I'm proud to be Catholic. I don't think it should be an issue in this election. It shouldn't be raised. This election is about jobs for people. This election is not about two good guys who are family men. We know that. That's a given. It's about creating jobs for the people in the state of Louisiana, protecting education so when they get educated, they'll have a job when they come out."

"My view on anything is I will not ever, ever hide that I'm a born-again Christian. Ever," added Perry. "Until we start putting stronger Christian men and women in public office, there's not a lot that's going to change, and the reason being that because it is my view - it is my opinion - that when you're going put somebody with strong Christian beliefs in office, with good morals, who's a man or woman of integrity, the budget's going solve itself, the education is going solve itself, health care is going solve itself, because all the personal ambitions and the personal motives are taken out. You are there for the right reasons. So at the end of the day, I have no problem with anybody saying, You know, he wears his religion on his sleeve.' I don't (just) wear it on my sleeve. I wear it on my chest, I wear it on my shoes, I wear it on my pants. That is who I am. I'm not offended by it. I'm not afraid to say it."

The candidates showed the most divergence in opinion when discussing higher ed.

"We need to protect higher education," insisted Granger. "I'm a firm believer that you need to go down on the budget cuts, go down the list, and when you get to education, you need to go back to the top of the list and see what else we need to cut, and see where else we need to cut. We need to examine all the inefficiencies in education. We need to examine the budget closely. I do it every day. It's how I have to live, because if I don't, I won't have a business."

"We have got to do more streamlining, and we've got to start cutting," Perry fired back. "Cause when we cut at the top, it's going to benefit y'all. It's going benefit the departments. That is the simplest way."

The candidates were also asked what they would do to help prepare and secure the district for the next hurricane.

"We have got to get a better levee system in Vermilion, Cameron and Iberia Parishes," said Perry. "We have got to get more federal funding. We need the government, specifically the president, to wake up and understand how important the coast of Louisiana is to this country. Shut down the pipelines and the gas lines for about 30 days and see how cold they get in New York. Maybe then they're going come down and give us some money to protect the coast. It is all about protecting those things that will benefit the country. That's our coastline."

"The people in Washington have to understand that we need a solution," said Granger. "Lifting homes is great. It's going get us out of the way until that protection barrier is done, but we need protection. The protection is there, we just got to get it funded."