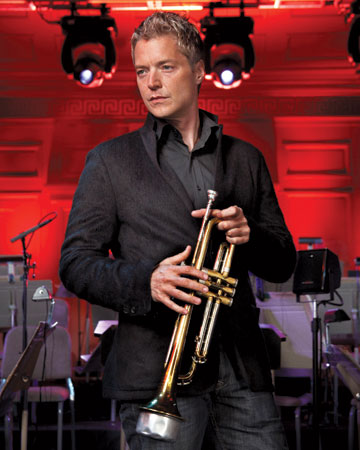 Grammy Award-winning trumpet player Chris Botti, who cut his chops playing the clubs and the pubs, brings his chill to the Heymann Center. By Anna Purdy

Grammy Award-winning trumpet player Chris Botti, who cut his chops playing the clubs and the pubs, brings his chill to the Heymann Center. By Anna Purdy 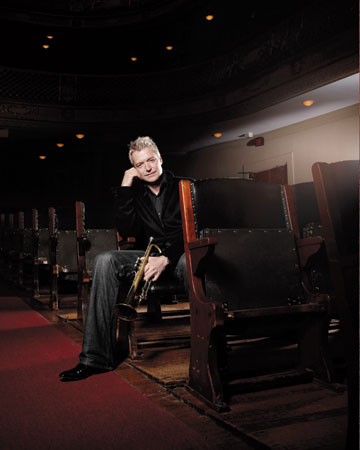 "I do know this, and I tell my friends this all the time, that the thing to do is move to one of those cities and play one of those little clubs and bit by bit chip away at it, and that's concrete," says Botti, who will perform at the Heymann Center Sunday, Feb. 20.

Born in Oregon to an Italian professor father and pianist mother, Botti was 12 when he decided his life would be the trumpet after hearing Miles Davis' rendition of "My Funny Valentine." At 17 Botti was playing clubs in Portland at night. He then studied at Indiana University, receiving two National Endowment of the Arts grants in consecutive summers. By 23 he was living in New York City to pursue his dream of being a professional musician.

This is where he got his chops. "The shop room floor of the music industry," says Botti, 48, "are the clubs and the pubs that you play. And that's just it. You don't become a star on television. You become a star by doing what the Police did where 14 people come to the show, and the next time they come through town 140 people come to the show and the next time 2,000. You know, through word of mouth. And that's really the only real concrete way of becoming a true, long-lasting star." It was in New York that Botti played at venues like the Blue Note and jazz clubs in the South Village. And just like with so many careers, it's all in who you meet.

"We had jam sessions every night, so if you met someone and they liked you enough they would invite you to sessions that started at one in the afternoon 'til dinner or something like that," Botti says. "They were usually in Brooklyn at some great musician's house. That was really where the real heavyweights would hang out. They would roll out of bed at noon and start playing jazz."

It was at one of these sessions that Botti met Lenny Pickett, the saxophonist in the Saturday Night Live Band since 1985 who recommended Botti when Paul Simon was looking for a trumpet player. Soon he was off and playing with one of America's most renowned lyricists. "So I went around the world with them for like a year and a half and learned a lot about music," he continues. "That was a great jumping off point for me."

It was through touring and meeting other musicians that Botti found a great working relationship and a great friend in Sting. One night backstage after a show, someone remarked the two men looked alike. "We were on the road, and someone came up to us and said we looked like brothers and he said, Yeah, that's my evil younger brother,' all meant with affection and love. I think when you are on the road with someone for that long, basically on the road with them for 26 straight months, you find ways to express yourself, and certainly that's one of them."

The '90s found Botti working steadily, touring and serving as a studio musician with people like Joni Mitchell, Simon, John Mayer, Steven Tyler and even Ol' Blue Eyes Frank Sinatra himself. In 2000 he signed with Sony and recorded Night Sessions. Since then several of Botti's albums have reached No. 1 on the jazz billboard charts and have gone gold and platinum, with some Grammy awards thrown in for good measure. He was even put on People Magazine's 2004 list of the "50 Most Beautiful People." So what did it take to gain all these accolades - aside from genetics for the latter?

Botti is unsure that a lot of the up-and-coming generation of musicians can really appreciate what it takes. "I think so many kids nowadays want to be pop stars overnight via American Idol and all that other stuff, but they don't really want to look at the artist that takes tons and tons of hours of practice. I had a really good role model moving up to New York and seeing those people that still really were into playing, practicing and becoming better on their instruments."

Music is a social activity in every aspect, says Botti, and merely putting a video up on YouTube doesn't give nubile musicians the connections in the industry or with their audience to hone their craft. "It wasn't that long ago, it was 2001 that I played in San Francisco to a crowd that was four people and my band was six. You know, so I've done it, I've done it all, and I think that a young person can start chipping away at it and make something real. That will never leave them - their ability to relate to an audience will never leave them."

It isn't just the advent of social media and the phenomena of getting enough YouTube hits until Ellen invites you on her show and parlaying that into a career that Botti finds dismaying. It's also that record companies want to spend less money and time on the talent they sign. "I think that there was a garage door closing. And if a kid was able to get underneath that garage door into a recording career by 2005 that they have a shot at some sort of longevity. But now that door is closed. Record companies really don't want to put up enough money to have a five-year trial for an artist. You know, I signed with Sony music in 2000, and I didn't really like start knocking records out of the park until 2005, and they already put up three records' worth. I think that kind of thing is going away."

Chris Botti performs at the Heymann Center at 5 p.m. Sunday, Feb. 20. Prices start at $27 for balcony seats. Call 237-2787 or go to pasa-online.org to buy tickets or for more information.