The reference section at the Lafayette Public Library disappears from public view to make way for more computers. 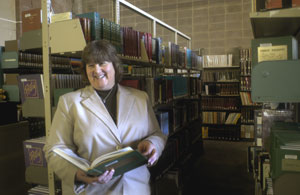 On the morning of Friday, Feb. 10, the reference section in the main branch of the Lafayette Parish Library downtown appears to be missing. The tan metal shelves that once held almanacs, dictionaries, literary criticism and bibliographies are barren, except for recent copies of newspapers and a couple sets of encyclopedias. A sign taped to one of the shelves asks patrons to pardon the library's progress.

What happened to the reference section?

"It's been moved to the third floor," says a librarian at the information desk. The third floor, not accessible to the public, is an unfinished space used for storing periodicals, old furniture and library files. "If there's a particular book you're looking for," she adds, "I can get it for you."

But what if patrons don't know what they're looking for? How would they browse the section?

The librarian doesn't have an answer. Instead, she asks, "Would you like to fill out a complaint form?"

Another librarian, passing within earshot, mutters, "Please do."

Library Director Sona Dombourian says the reference section was moved earlier in the month to make way for more computers. "We're doing some rearranging," she says. "As libraries change, we're finding quite a bit of the information traditionally found in books are now available through our electronic databases over the Internet. So we're relocating some of those reference books. We have a storage space currently up on our third floor, and we're relocating some of those lesser used books, putting them up on the third floor."

But the entire collection, not just a handful of books, were moved upstairs and out of the public's reach. Dombourian says the move, in part, was only temporary, and that some of the reference section will find its way back onto the second floor after setting up the new computers and determining which books patrons use the most. In the meantime, the library will allow patrons conducting research to access the third floor.

The reference collection was downsized once before in 1998 when the library first added computers. One in every four of the main branch's patrons utilizes the computers. There are currently 30 computers for public use in the library, and the new additions will bring that number to 57 for Internet use, Microsoft Office applications, database access and children's educational games.

A week after contacting Dombourian about the move, some of the reference materials had returned to the shelves and a few empty work stations without computers were in place. Sources close to the library say there never was any intention of moving any of the section back to the second floor until The Independent Weekly inquired about the move. Dombourian now says that as librarians pull reference books from the third floor, they are simply re-shelving them on the second floor.

But the decision to move the collection, Dombourian says, was not hers. "The department head is the one who actually made that decision," she says. "I was not aware of it. I'm sorry to say that I often spend many days in meetings and in my office, and I don't always get to walk the floor."

Libraries across the nation are finding themselves in this peculiar pinch, trying to balance patrons' access to books with the increased demand for computers.

Leslie Burger, president-elect of the American Library Association, is also the director of the Princeton Public Library in Princeton, New Jersey. She says that while reference sections are integral to the operation of libraries, how that information is acquired is changing. "Many people now rely on the Web to get a lot of those same resources," she says. "Many libraries have increasingly purchased digital content on the Web through a subscription to replace some of those print resources. That is becoming very common." And the greatest advantage for patrons, she says, is that they have access to the latest updated information.

Burger's library moved into a new facility in 2004, and in the process it threw away many of its reference books and quadrupled the number of computers. There are 100 computers in the Princeton library that she says are in use "all day, every day." But before making that move, she and her staff studied which books were being used the most. She says, "Generally speaking, I would say the trend is to begin shrinking those print collections because so much of that content is either available through the Web or digitally. So many libraries are putting in more computers than books at this point." Dombourian says there was not a survey or study conducted on the reference section before moving it.

In addition to dealing with how patrons access information, Dombourian says the main library is also dealing with the added problem of space constraints. This spring, the main branch will begin a planning process for a complete renovation, as part of the $40 million bond approved by Lafayette residents in November 2002. Residents will be able to offer their ideas on improving the 30-year-old facility. After being put out for bid, renovations should begin in 2009.

For now, Dombourian says there's no need to be alarmed by the glaring empty shelves on the second floor. "Our intent is to improve our services to the public, and I think that's what this is," she says. "But at some point, someone notices, and I'm actually quite flattered that somebody noticed. It kind of gives me that warm fuzzy that someone's still using our books, and books are still important in life. I think that's wonderful."