Scheduled to begin construction in September, the project has drawn the ire of some residents of the neighborhood who say the design and scale of the project are incongruent with the existing residential architecture.

The controversial Joie de Vivre housing project in downtown Lafayette took another turn toward reality this week with the announcement that the Lemoine Company has been selected as general contractor for the 72-unit development in the Mills Addition neighborhood across Congress Street from the IberiaBank building and the Lafayette Public Library.

Scheduled to begin construction in September, the project has drawn the ire of some residents of the neighborhood who say the design and scale of the project are incongruent with the existing residential architecture. Citing financial constraints and those neighborhood concerns, Acadiana Outreach, the project coordinator, announced last fall that plans for Joie de Vivre were being scaled back and the design was being modified to comport better with the urban landscape. 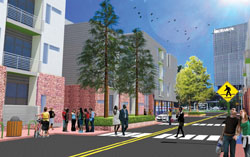 Last May, Acadiana Outreach announced plans to build a $25 million, 10-building, mixed-use affordable housing development near downtown. The project was to be funded largely through the sale of $20 million in tax credits. At the time, Acadiana Outreach and its main consultant, The Cartesian Company, were still awaiting the Louisiana Housing Finance Authority's annual Qualified Application Plan, which governs all tax credit applications. When the guidelines were published in August, they included a $1.5 million a year cap for tax credit applicants. That limit, along with neighborhood concerns over the density of the development and some failed property acquisitions, forced Joie De Vivre planners to modify their plans.

AOC re-envisioned Joie De Vivre as a six building, $16.5 million project. The complex went from 118 to 72 rental units, a 39 percent reduction in density. While financing certainly played a role in the changes, planners insist their primary motivation was winning over support from the entire community.

Read more about the project here.